Flowering - Question About Where I Am

NOTE: This is cross-posted from the Outdoor -> The Grow forum where I accidentally posted it first.

I am growing 6 Crystal plants, and I THINK I am on week 6 of flowering. Right now I have about half inch buds. Looking at them, I think I may have accidentally skipped one of the early blooming weeks when the plants were getting a lot more nutrients. I currently have about 99% white pistils as well.

My question is - can I extend the flowering period at my current nute level, or should I slightly increase nutes for a week then get back to the schedule? I am using General Hydroponics nutes, and am currently on week 10 of this schedule: 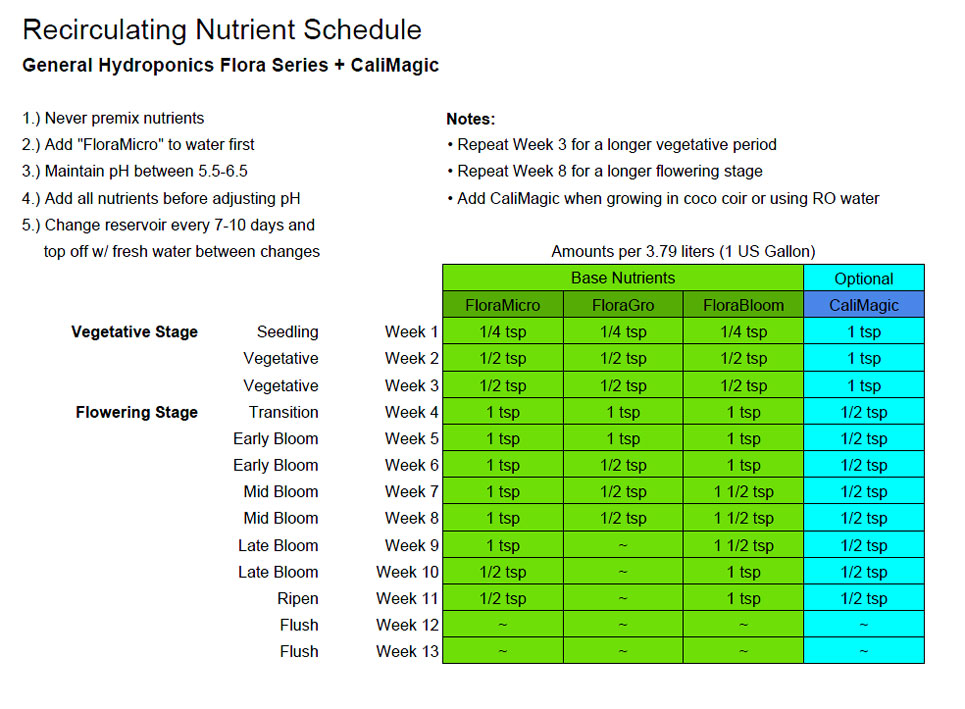 Here is a pic of my plants currently (as of today):

Fever - 3-5 weeks including the two week flush? That would put me at 3 weeks per the current schedule (one more week with nutes, 2 weeks plain water). If I did indeed accidentally skip an early bloom week, that’s 4 weeks… question is do I just repeat next week the week after and then flush, or is there something else I should do nutrient-wise for the next two weeks?

Just keep feeding them as if you were in week 3

I would favor the long side. More like 5 to 7 weeks to me based on pistils and bud size.

So go back to the Week 8 nute level per the chart I posted in the original post, and continue from there?

Personally, I wouldn’t expect it to follow an exact date that closely. The flowering times are estimates, and there can be several variables to make it shorter or longer. Your best bet is going to be just watching her develop. The last couple of weeks can make or break your quality and yeild. If you stop with nutes too soon or harvest too soon it will really hamper your grow.

Flushing is a personal preference that a lot of growers don’t even do. If it were me, I would rather give up some of that flush time to make sure they were indeed ready before pulling nutes. You will really be surprised at how much those buds will swell right before they’re ready to come down.

I’m going to slightly increase the nutes next week and just watch them carefully. This week and last I gave them 5ml FloraMicro, 10ml FloraGro, and 5ml CaliMagic per gallon of water. Next week I’ll go back to 10/15/5ml per gal and watch them closely.

So I changed my water yesterday. I filled my buckets and set the PPM at 800. I will keep a close eye on them and adjust accordingly. I’ll post a pic next week.

This morning I checked everything in my tent. Yesterday I noticed the very tips of my leaves showing yellow/brown, so I adjusted the PPM level down to 800-850 in all my buckets. This morning they were all right around 930. PH was between 5.7 and 5.9 in all my buckets. Here is a pic of my mess of a first grow:

I am starting to see more significant browning of pistils. This pic shows what a good chunk of my buds look like:

I’ll plan on feeding them nutes up until harvest and maybe do a 2 day flush. Here are some extra pics of my mess:

They are definitely drinking a lot less water than when I was under feeding them. Last week they went through a gallon or so of water each in two days. This week a small drop in water volume.

This bud pic certainly looks more mature than the last one you posted. Not really sure what’s going on there… assuming you planted them all at same time? Possibly the ones getting less light may not be as developed?

Good move on lowering feeding, some strains are a little more sensitive on nutes.

Yeah I planted them all at the same time. The one bud pic is from the corner of the tent, so that bud is probably not getting as much light as the rest of the area - but that whole plant in the front right corner of my tent looks that way, not just that one bud. I’ll just harvest that one sooner if I need to. For what it is worth, this is my set up:

I originally sprouted the seeds in soil, then transplanted to my hydro system. For a growing medium in hydro I am using clay pellets.

My tap water is 65ppm and around 7 PH. I have been adjusting to anywhere between 5,5-6.0 PH for most of the grow and as you know just started measuring PPM this week.

As you can tell by how chaotic my grow is, I pretty much topped without knowing what the hell I am doing so I have branches and stuff going everywhere. the plant branches are so intermingled in many cases it’s hard for me to even tell which ones go to which plants.

In any case it’s been a serious learning experience trying to do my first ever grow in hydro. I would probably tell anyone else doing their first grow to just stick with soil the first time around.

One last thing: I put a small 3 liter dehumidifier in the tent. That lowered the RH from 75-80% to 65%. I have a full sized dehumidifier arriving today that I am going to put in the basement outside the tent to try and get the RH down to 40%.

Sounds like you have a pretty good handle on it moving forward.

You could’ve run into the same issues staying with the soil. The major difference between hydo and soil when coming to issues, is that you usually see them right away in hydro. You can also fix them right away, something not easily done in soil. So don’t beat yourself up over it.

Running the 1 light could explain why your plants are in slightly different stages. There’s probably a lot of variation in light intensity across your canopy.

@dbrn32 - For a 4x4 growing area what would be a good lighting system (prefer LED)?

There a lot of options depending on budget. I like the cobs, but have been shifting towards the midpower strips and boards. If you have the cash, hlg 550 is a pretty good example. Otherwise plc-6, or there’s a few options from timber grow lights for a 4x4.

It really depends on what you’re trying to do in the 4x4. If you’re going to fill it, you’ll want some fairly serious lighting. If you’re going to run a couple of plants and have some dead space, you could probably just add another fixture similarly to the one you have. It’s really more about getting the most out of your money, rather than having the coolest hot new lighting technology. It will all grow weed.

Checked the water on 3 of my plants at noon today. One of the three drank a lot of water over night - way more than the other two. PPM on that plant is currently at 1000 (I didn’t check PH). The other two are sitting at 920-930 and drank half as much water.

Here is a pic from today of the bud that I posted in the original post (this time closer and with the flash off):

Still looks like 2-3 weeks away for that plant? The plant that drank a lot of water has at least 50% brown pistols (maybe more). The trichomes on it look glassy to me (not cloudy). But I can’t honestly tell the difference so I’ll have to wait for amber trichomes to start showing up before I do anything.

FYI: I read through my old texts with my golf/weed buddy and found out when I switched to 12/12 lighting. July 21st. So, doing some quick math (i.e. letting my computer figure it out for me), it’s been 47 days since I switched to flowering. ILGM specs say the Crystal has a 65 day flowering period so I’m still two or three weeks out, roughly - which looks right to me, more or less.

4 days into much higher nutrients in my solution. I’ve been checking the plants twice a day and adjusting the reservoirs as needed to keep them between 800-900 PPM and as close to 5.8 PH as I can get without a degree in chemistry. The browning I saw on the tips of the plants on Monday has not increased at all, so the plants seem stable. Now I guess my biggest question is whether or not I will need to harvest the one plant that seems to be ripening faster.

This first picture is from the plant in question. Most of the flowers look like this, with a few having even more brown pistils. A trichome check looks glassy andcloudy but no amber to me:

This next picture is from the plant in the back right, which looks more or less like the other plants in the tent (except the one noted above). Sorry that it’s a little blurry - this one is right in front of a fan:

I will be traveling all next week so will have to have my partner in crime top off my plants mid-week. So next week I won’t be able to baby them every day. I’m going to assume that the one plant from the first picture in this post will be okay growing for another week - worse case scenario I’ll let that one go to mostly amber trichomes. I’d be curious how different the highs will be from the same strain are depending on the condition of the trichomes at harvest anyway.

Hey Bogleg…RDG1951 here. Will you send me that chart. I think it would help me out with my next grow. I’m in late 3rd week of flowering and yours look a lot better than mine. Thanks Chromie

I will be happy to once I figure out how/if I can send PMs.