We came home from dinner with friends last night and I noticed a flickering in the greenhouse. The Spider Farmer 4000 was flickering if you will. The light never goes out, it seems like the intensity increases/decreases rapidly. I have had it a year this month with no issues. I am wondering if anyone might have some suggestions. I emailed the company, but who knows if I will hear back. @dbrn32 , I believe you might be one of our light Wizards? any ideas?

Some drivers aren’t meant to exceeded a certain voltage if you wire them incorrectly, can you dim the light to stop the flickering?

If this works they wired it incorrectly for the driver

Thanks, I checked briefly last night and will do a more thorough inspection this morning. I Did check the plug connections and they looked ok but didn’t spend a lot of time on them.

Try an outlet that’s not on the same breaker as the rest of the grow, see if it’s just a draw issue

I draw from multiple breakers to support the feed

A multimeter on that outlet will get you a better idea of what/ where to look for the issue.

A kill-a-watt meter will help know draw your pulling as well if this is a persistent issue.

Hopefully it’s just a faulty outlet/ old outlet and can be swapped for a new easily.

I have had no issues, but since you mention it, so I don’t think it is a wiring issue. I had read here of someone with a newer version of the light and dimming controls easy to access. Mine you have to take of a few screws to get to the dimming features and a couple of screwdrivers to adjust. I was curious to see if mine came at 100% from the factory. I did all I just mentioned, and it was indeed at 100% and was able to turn brightness up and down. Could I have inadvertently turned it past 100%. I will research that this morning, thanks for the tip. I will start with the easy stuff first, ie outlets and connections.

Funny thing is I haven’t noticed this before last night, so trying to think of anything being different. I will certainly start with the easy stuff as you indicated. Also curious to see if it does this all the time, or after it warms up?

Keep us posted as many users here also grow with the sf lights. Best of luck and hopefully it’s just a loose connection somewhere in the extension cords 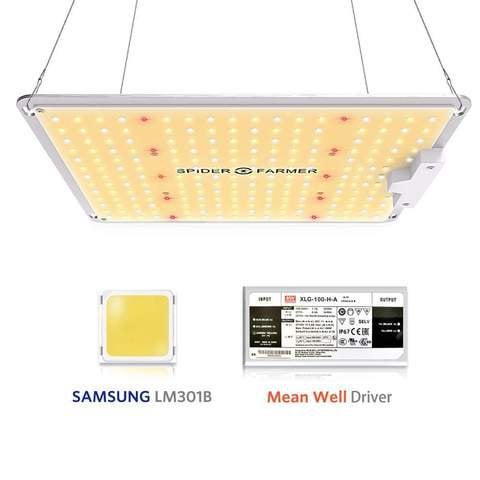 Thank You, maybe I was the culprit. Wondering why it took this long for the flicker, as it has been a good 3 weeks since I did this. Maybe I didn’t notice it before?

Just read the post, and I may definitely have to adjust the VO. I was clueless as to what the 2 adjustments meant, so I winged it. As my wife says, just like a man!!1 Read the manual!! Unfortunately, SF gives you very little in the way of a manual.

Tell her we said “life’s too short to read manuals”

Would never hear the end of it, lol.

Rapid flickering on and off is usually caused by under voltage condition. If your driver has a vo adjust, turning this too low can definitely cause it. A loose connection may do it too. If you can’t find anything like this wrong, you could check for a ground in wiring, like damaged wire insulation against frame of light.

In most cases with a year old light one of these is the issue. If you don’t see anything, could be a faulty driver. I would say test out spider farmer customer service.

Thank you, Just getting back from my very unscientific check. Checked connections, all good. Wires not rubbing against anything, and all wires and connectors are sturdy looking. I think they did a good job with the assembly itself. Now, when I first went out there this morning, I manually turned it on. One half of the light came on, other half came on and off totally, not a flicker, for about 10 seconds, then it came on and it is still on. I checked the VO and Io on both drivers. They are basically full on., and how they came from the factory? Hard to remember, but full clockwise to the stop on both the VO and Io and back of maybe 1/8 of a turn. I did this to both, light is on in the greenhouse and no flickering. Maybe it is the driver over the half that wouldn’t come on initially today? I did reach out to the company and actually had a reply this morning, saying it is weekend so slow response lol, and asking for pictures or videos. I guess I will have to wait to see what it does next. They also asked for mailing address as the next step is a shipment, according to them. I don’t think they ship drivers, but whole light assembly, I may be wrong on that

The funny thing is they mention turning back the VO to 120V and stop the flickering but it is a 120V light, no? I am not an electrician and getting lost on the 120/240 Volt thing.