@Jonesy287 What are u running right now?

You have aerial picture of your LST? Sounds interesting. I’m running wedding cake from ILGM on this run

@Docnraq hey I’m pretty sure I asked this but i forgot (god damn reefer brain) I just planted some more seeds a couple days ago. Germinated sooooo fast one actually ejected the seed casing in the paper towel! I planted that one very carefully and domed it and it’s doing great.

The other two haven’t sprouted yet. I watered the pots before hand made sure they were damp. Now so you wait for the seed to sprout before misting the top again? I know once they do some them most around the dome but just wanted to be clear on before they sprout so I don’t stunt them or something

And to be exact they got planted on the 10th

Depends on the soil, is it still wet looking? Also what is the temp inside the tent. Its hard to germ plants under 80 degrees.

The very top layer is drying a bit but deeper down it’s still cool and moist. I put like a gallon of water through each of my 5 gallon pots before I planted them and let them drain of course before I planted.

It’s like 75-76 in the tent right now. Reason being where I live it’s fucking 20 degrees out right now so it gets cold in the house. It’s also dry humidity wise. Like I said they popped and had tails before they went in the dirt.

Like I said they popped and had tails before they went in the dirt.

They still need to be warmer then that. Figure that it is at least 5 degrees cooler in the moist soil then it is inside the tent.

Ok I got it up over 77 now. Might have to throw a space heater in there till they come up

Actually over 78 I just looked

@Hellraiser hey man been reading your stuff and I got a question, I may be paranoid but I just need some reassurance lol.

I planted some seeds on the 10th, they germinated beautifully and I put them in my soil ~1/2 inch down after watering the pot and letting it drip and drain. One ejected the seed casing in the paper towel actually never seen that before had to carefully plant it with tweezers but that one seems to be ok with the down on it.

After another day or two, if they still don’t sprout should I dig a little and investigate?

@Docnraq hey been thinking about trying a new method early on. I’ve been germinating them and just putting them in a 5 gallon pot. But I’ve been having issues getting them to sprout.

I was thinking about starting them in solo cups and transplanting to the 5 gallon pot after a few weeks in the cup. What I’m having trouble with is if I start them in the cup then move them to newer soil when would I begin to feed them? I use the FFOF soil and being good for about a month without having to add nutes, would I start adding nutes like a month after the transplant?

Just trying to experiment and get the best method for me down.

@moderators how would that go if I went that route? Like I said just seems like they are having trouble sprouting and it seems like doing a transplant can be beneficial to root development which is always good

You can do it that way for sure, each method has its draw backs and advantages. After you transplant keep using straight phd water. Water in the transplant as normal then the next watering, water until runoff. Wash and repeat until the runoff dips below 1000 then start feeding. Give your roots a boost and drop some mycos or realgrowers recharge into the transplant hole, you will be glad you did.

transplant can be beneficial to root development

While this is true, transplants are/can be stressful on a plant. Sometimes they go into shock for like a week. If your plant is an autoflower a week is devastating to your over all yeild. Its risky with autos, touchy lil buggers!

Well like I said I’m just not having an easy time getting these things to break through soil. It’s been 5 days and there’s no sign of them coming up still.

I mean what are some things I might have done wrong? The pots got watered, the seeds were planted tail down. It’s almost 80 in there now too. The one I planted that had already shot the casing off doesn’t seem to be progressing much either. I’m just frustrated lol I’ll send a pic of that one

I hear that frustration. Having an issue germing seeds rught now also, planted 7, only two have broken ground its been 5 days 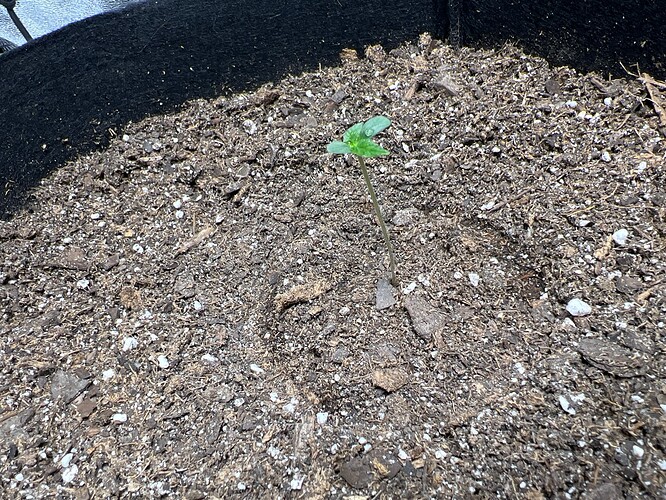 This is the little sprout I planted on the 10th. Just looks like it’s not progressing as much as I thought it would at this point. Just misting in the dome once a day and misting the soil around the dome when it’s dry.

The only thing I can think of is maybe the other two got buried too deep? I mean I thought they were good but maybe I’m wrong. Everything else has been done correctly so far

Also on the dome, should you poke a hole in the top so some air can get out? Just didn’t think I want it at 100% humidity in there