First harvest (pics inside), what went wrong with it?

Hi all! Harvested my first plant today, an ILGM Wedding Cake Auto. Had a great time growing it, and learned a lot, but there’s a lot more to learn. 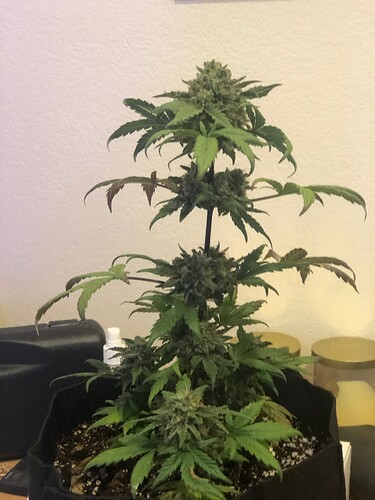 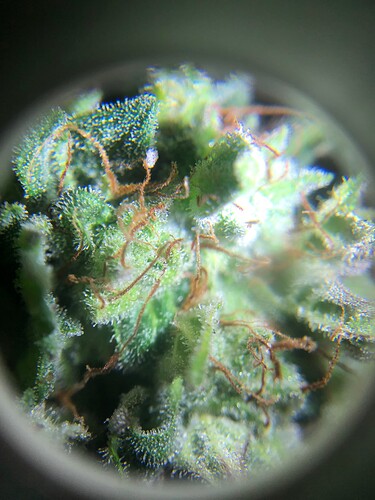 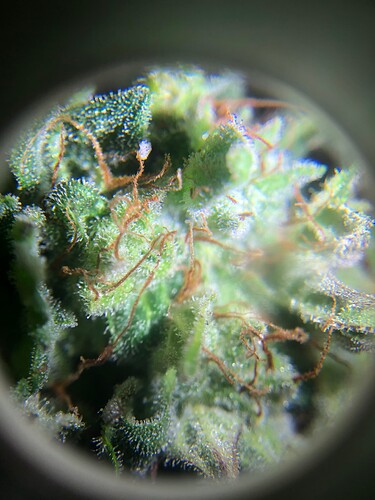 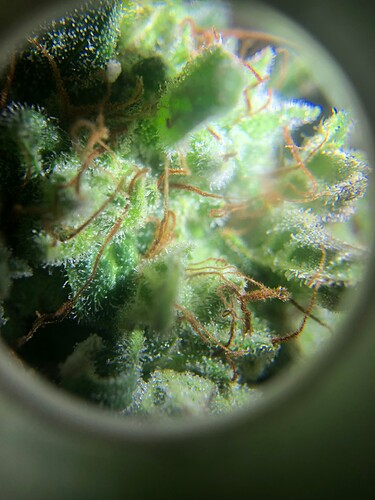 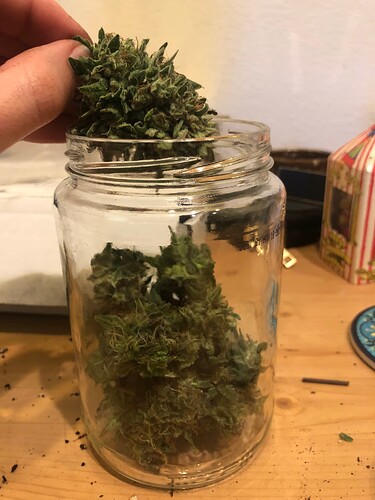 So a couple things that I think went wrong:

I think a big problem was chronic under-watering. I destroyed my first grow due to over-watering, so I think I overcorrected in the other direction.

Any thoughts, advice, criticisms, or suggestions are appreciated!

i cant really see the trichs but it probably could of went alittle longer. Looks like the auto was stunted and that happens sometimes. with density of the buds, lighting makes the difference, so the bottom buds dont get as much as the top buds. All in all shes beautiful and congrats on your 1st harvest, gotta post a smoke report on how she is.

I seen alotta people grow in short amount of times. Seen an auto at 65 days look huge. These are at 42 days alrsy n still babies and they are autos 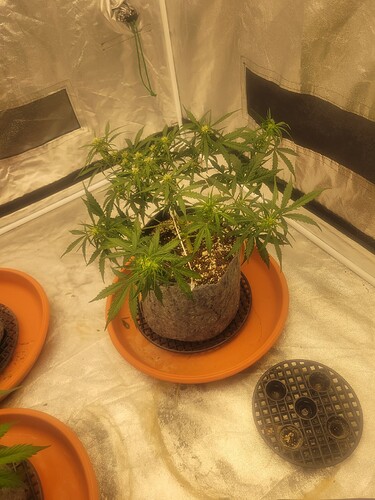 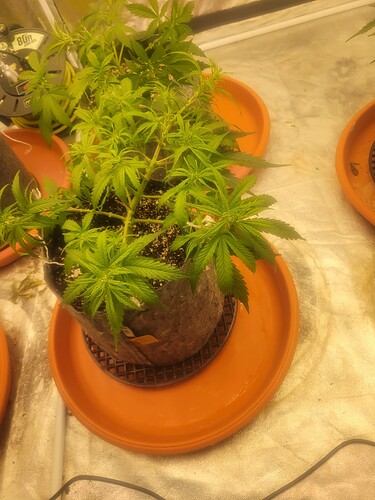 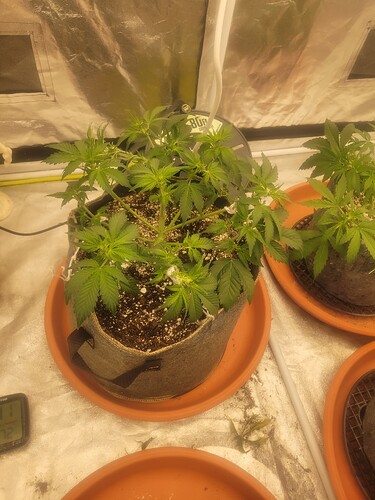 I think it looks great overall, here’s what I see, I’m no expert by any means.

A support ticket may be helpful, it’s hard to determine what went wrong without some information.

Thanks for the replies guys! I’ll try to get some better pictures of the trichs, but it’s difficult with a handheld jeweler’s scope and an iphone lol.

As far as setup goes:

I kept a journal for the first 3 weeks or so, but I came up on finals season (full-time student) and went out of town for a week so by the time I finally had some time to commit to journaling they were already at 4 or 5 weeks old, didn’t really pick up the journaling again after that.

I’ll actually be switching from autos to photos for the next grow, already got a couple seedings I’m going to grow to clone, the autos are just kind of inconsistent in terms of growth and production from my extremely limited experience.

Sounds like you did pretty well. I’m in FF soils as well pretty big plastic pots, bigger than a 5 bucket for sure. I water between 5-7days usually and a bit more in flower. I found that very slowly watering them is best, when I water each plant gets fully saturated, enough for 20% runoff and I give them an hour or to so they can absorb the runoff if needed. I don’t let them sit in it for more than a couple hours, I don’t water again until they’re getting a little droopy.

Your best bet would be to use the weight of the pot to determine when to water. Water is heavy almost 9lbs a gallon. Get a feel for your containers when they are freshly watered, and also what they feel like when they dry all the way out. It’s good practice for plants in soil to ensure dry/wet cycles. I let my plants get droopy before I water again, they’ll let you know when they’re thirsty. It looks grim but they snap back quickly. If they’re always wet the roots don’t reach out to find water resulting in a smaller root system. 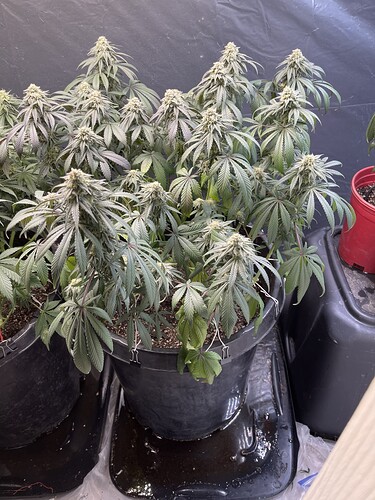 This picture shows my plants an hour after hydrating them, if you notice the area in the top left of the picture she’s recovering faster than the portion of the same plant in the lower right, still pretty droopy there.

Just as an example of what a really dry plant looks like.

@TinyMeatGang You said the Total grow cycle was 9 weeks, you meant flowering cycle right, as 9 weeks counting veg time is way early. I think you picked it a tad early that’s my guess. Good job either way. What you gonna grow next?

9 weeks total from seed to harvest. I also thought it was exceptionally short, but all the pistils turned brown and the trichs are milky with a bit of amber, so I didn’t want it to go any longer based on the harvest guides and information I’ve read.

I have 3 different strains and a couple different plants of each strain, a couple others are very close to harvest and others barely have buds formed, even among the same strains. All sprouted within a 24 hours of each other.

I’m currently growing 2x ILGM Feminized White Widow and 2x ILGM Feminized Girl Scout Cookies Extreme, gonna toss them in some 10 gallon pots and keep them in veg to clone off of, but for the next grow I still have some White Widow Auto, Afghan Kush Auto, and Wedding Cake Auto seeds to finish off so I might do those instead. It kinda depends on how quickly the feminized mothers grow; if they’re ready to clone by the time this grow is done I’ll go with the photos, if they still need some grow time I’ll go with the autos. But definitely switching fully to photos in the long term; I’ve found autos to be pretty tough as a new grower because the inherently limited veg time means that mistakes are punished much harder than photos. Plus people have told me that photos are far more consistent and higher-yielding in general.

More pictures! These are of the buds of the plant I harvested: 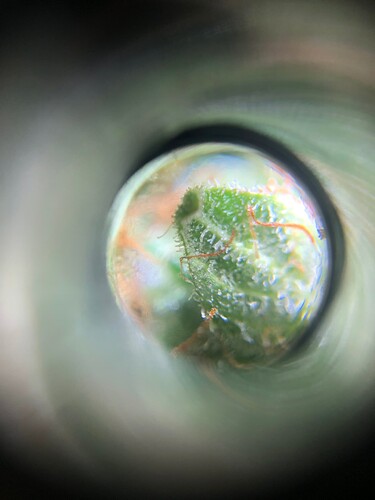 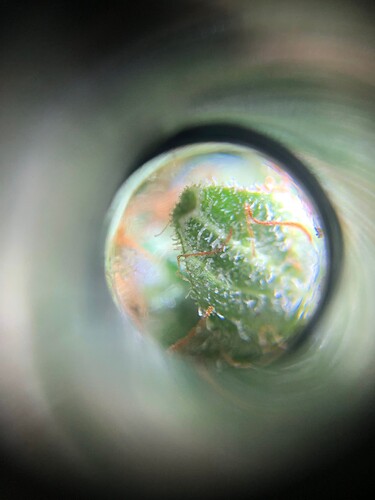 Here’s some pictures of the other Wedding Cake of matching age: 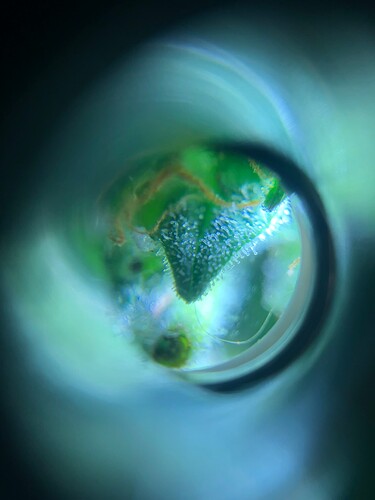 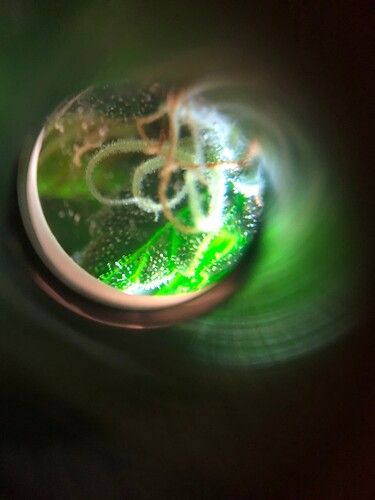 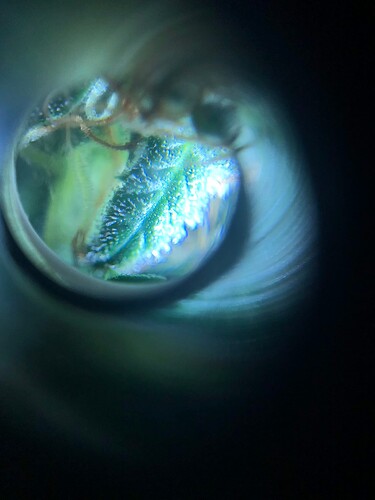 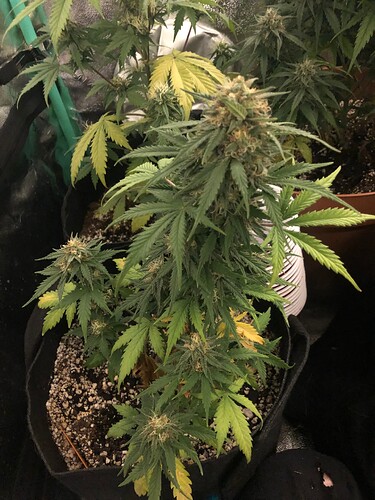 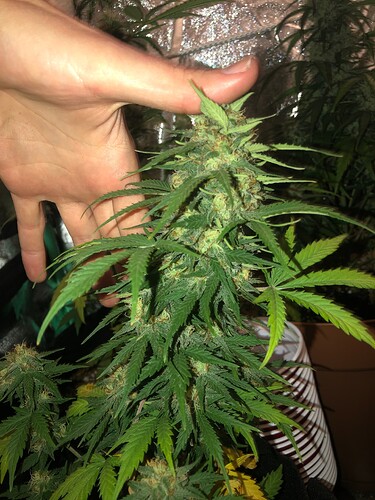 There are definitely some strips of amber in some of the pictures, but again it’s really hard to get good pictures. This was 100x magnification, as focused as I could make it. I might let this one go for a bit longer but do my best to keep an eye on it. Seems like it’s around 5-10% amber right now, but again it’s really hard to tell. It seems like some places I look it’s opaque/amber, and others it’s still fairly clear, all within the main stalk of the one plant.

Truth is brkther it’s hit and miss with autos, no way to necessarily make them big they’ll grow however the hell they want

majority of mine don’t reach more than 3 foot tall. But the end result is premium smoke, it’s all in the lighting and environment

@Jestertz also, topping and LST slows down autos and keeps them small pretty drastically, let them go natural they’ll be bigger, and the yield isn’t that much different

If you’re checking the trichomes on the little leaves they’ll give you false predictions also brother, need check the calyxes or where the pistols from from. They’re the right trichomes to check

looks like she could have gone another week or two, but if that’s your first plant you haven’t done a bad job at all don’t knock yourself my bro my first plant didn’t make it past day 4 cos I used building soil like a absolute nut job

I water like you… Years ago, was called Hi-Tech watering lol How ya doin’ tonight!!! I haven’t had enough time to get back in here… So I’m glad I couldn’t sleep… Plants look great!

Good shots! I’m on my 1st grow myself, learning, but like someone said, you did a great job! I’d be happy to smoke it!

Hi there i believe the trichomes u were seeing were on sugar leaves and there for they change colour before the trichomes on the buds do .i believe that you have definitely harvest to early aswell ,the pistols will change colour and then they will bring new pistols for what i have read if that had another two to three weeks the buds would of gotten dencer but good job the plant looked good so did the buds u got . unfortunately its a live and learn lesson we have all been there before

I seen this auto this guy fimmed liked 8 times and is huge. Idk. I like my photos i think lol

Kronic? He’s done some wild things with autos, successfully revegged them and had one not flower for over 200+ days, just by repotting it. I haven’t watched many of his vids recently, tho.

No but ima check him out now lol this guy on here. 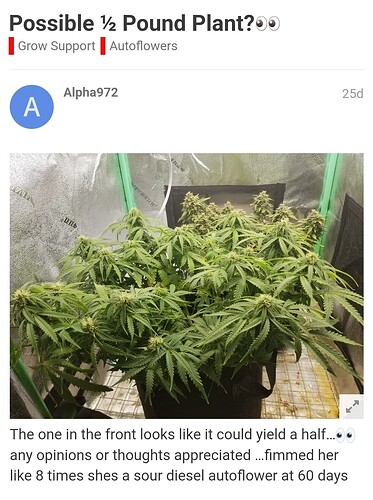 You chopped it a few weeks too early. The leaves will tell you a lot. Once they start yellowing and fading it signals the end is near. Otherwise keep on growing