First grow with a few questions and concerns

Hello and thank you in advance for your time.
I planted ILGM 1x White widow & 1x Black widow on 3/23 in rapid rooters. I transplanted them each into 10G sterlite totes with 6” net pots in the lid, the day I saw taproots coming out of the bottom of the rooter. The BW had sprouted but the WW was still making its way up. At the time I was using tap water only and had only one air line and a small air stone in each tote. The next two weeks or so I struggled with a consistent environment and my day temps were ~ 76-81F and RH was ~ 35-45% during the day. I experimented with using different “domes” over them both to try to raise humidity but again was pretty inconsistent with everything (constant adjustments).
By now my days are consumed by reading everything I can and researching anything I can use to help me. I added a humidifier after both plants eventually out grew the domes. Added an Ac infinity T6 exhaust. Starting to dial in the environment better, but first week of using the humidifier I was lazy and wasn’t turning it on at same time as lights. The result was about an hour or two of 81F and 35%. The BW at this point is growing pretty steady, and the WW is shorter and growing more slowly.
About two weeks ago I noticed what looked like root rot in the WW. It was roughly half the size of the BW at this point and I noticed a few very small darker tannish/brown spots near the tops of the roots. I added Hydroguard to both totes, but was still in tap water at this point with very low nutrient solution (~200-300ppm, also note my tap water contains chloromine). Right around this time I tried to top both plants for a second time ( first attempt I think I just barely clipped the new fan leaves growing in?) since all of this the WW is still growing but it’s slow and the new growth seems to be getting squeezed by the older beat up fan leaves which don’t seem to want to grow any further away from the center. From what I can tell the new growth looks pretty healthy other than it being super tightly packed in the middle and relatively slower growth. 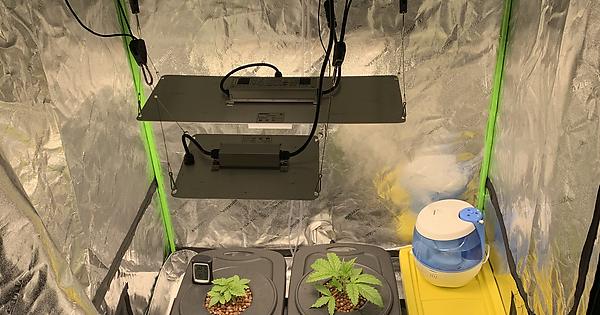 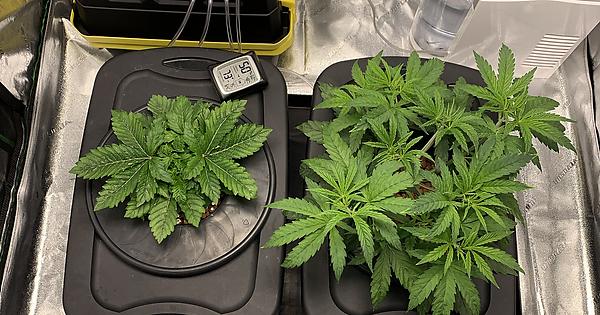 If you are still reading, thank you again for your time…
Am I correct in assuming root rot in WW? I know I held water levels to high for to long and did not have enough aeration in the totes (hopefully fixed both). Is Hydroguard enough to get her through this? Is there anything I can do for now to aid her recovery (removal of any old damaged leaves???). I’m really worried the new growth is being stunted by lack of space from the older stuff. Also how’s my BW looking? Any advice is greatly appreciated!!

What is rez temp?
How far below net pots is liquid?
How often do you change rez?

Pic of roots ?
Also what ph of water ?

I’ve never seen the Rez temp over 70F. Up until I lowered the water level (within last week or so) they were both between 68-70F pretty consistently. Now they both are around 66-68F.

The one thing I have been pretty good from the start is making fairly accurate pH adjustments. I typically check twice a day at minimum and have never been out of 5.5-6.5 for more than a 6 hours. Generally aiming for 5.8-6.2 like I’ve read and this morning both were right in the sweet spot. I just changed the WW rez last night for the second time overall. BW rez has been changed twice overall now as well. The plan moving forward is to change every 1-2 weeks or as necessary.

The second album posted should contain root pics.
I also forgot to add, on WW, the edges of the largest fan leaves (older beat up looking ones) are cupping up slightly and this is something that just started over the last week or so. I also know I have some yellow tips on the BW, think it might have been a Lil close to the lights before recently raising.

Edit to add, water was just below net pot until recently, now it’s about 1-1.5” below.

5.8 is sweet spot for hydro. That’s the target. I believe you have a fluctuation in ph that’s to big which may be cause of this. Also make water 2inch below pot.
There is no root rot. Root rot is brown and slimy. Your roots look nice.

@BetrayedSoul
Thank you for your advice!! I have been watching my pH much more closely and I think I understand now what you are saying. I had been waiting for the pH to drift out of the 5.5-6.5 range before making adjustments. I am now adjusting much more gently from within 5.5-6.5 until it’s around 5.8 and checking more frequently. I realized once I switched to the Zero Water filter, I’m having a bit more instability with my adjustments. I’m also having to use the “up” instead of “down” as my new water comes out around 6.0 (and drops to ~5.5ish after adding nutes).

I decided to remove two large, older fan leaves from each plant and it’s really seemed to help open up the WW a little better. I’m now slowing trying to LST it to get her to spread out a little more. I’m blown away at how tightly this WW stacks it’s nodes…

After a watching them a few days, I made a trip to the hydro store and got myself a pump to simplify my res changes. Changed the BW res last night and upped the feeding. I also rotated my light so it’s only covering the BW now and I added my sf600 to cover the smaller WW for the time being. Trying to negotiate another SF2000 on eBay right now to replace the sf600. I feel I’m still probably under feeding them both as I’m watching the ppm drop pretty steady and much faster than the water uptake.

I checked out your latest grow journal and I’m so impressed!!! I think eventually I’d love to build something similar if I continue with DWC. I’m not very “handy” at stuff like this in general but the automation aspects are so tempting!! Anyways, I appreciate any and all advice and hope all is well with you!

They look good. You can try raising light to see if the shorty grows out a bit but sometimes they just stack short. The one I have now was that way. It’s crazy how it was so close but now grown out nice.

I dont know which journal you saw. I have 2 so far. One is complete.

I read through your “ILGM Gorilla Glue 3rd grow” journal so far and will read the others soon. I really like the rdwc set up. I am considering trying one eventually if my plans for a dedicated room actually become a reality. I think my end game goal is starting to look like a 2-4 site rdwc with as much automation as possible.

If you were me, would you top the BW (taller one) again now or soon at least? I’m hoping to let the WW catch up a little before I flip to flower but I’m also kinda struggling to keep the BW short in the mean time. I’m assuming if I flipped today I probably wouldn’t be very happy with the results without at least another round of topping? I’m hoping to harvest at least enough to last until next time. Any advice on maximizing yield moving forward?

You can tie the taller one down. Most people train plants using ties to bring branches down to make it wider and open up more bud sites. That’s what I do. Its lst low stress training.

My first journal has a different setup and a change to another mid grow. Good learning stuff in there.

I’ve actually got both tied down some already. I’ve been “shaping” the BW for a week or two now and this is part of the reason I had to rearrange my lights. I had my sf2000 covering both plants (barely) but have been tying the BW tops further towards the edge of the footprint. Yesterday they (BW “tops”) seemed pretty sad before I changed the res so I decided to try to cover it with more light. Now I’m running it squarely over just the BW and trying to get another light for the WW. I figure I’ve got about a week or so before the WW spreads to far beyond my sf600 footprint. So far the BW is really lanky all over and I’m sure I made things worse along the way.