First grow, what is wrong with my plants?

Hey y’all just joined so I could figure out what’s going on with my first grow.

A couple weeks ago I noticed the leaves were curling up so I figured it was nitrogen toxicity (I put a lot of the auto grow living soil which is high in nitrogen, just dumped it all in the mixing tub instead of measuring the 2 tablespoons per gallon).

To remedy this I added a lot more coco coir to the top soil. This made it seem like the soil was always moist so I didn’t water for a long time. I also read online that curled leaves could be caused by overwatering.

Once they started pre-flowering I upped it to 500ml but now I had extra coco and thought they were overwatered so I’ve been waiting 4-5 days between watering.

The bottom leaves started to turn yellow and I took them off. The plants seem shriveled up and much smaller than before so now I’m thinking they are UNDER watered instead.

Today I gave them all 1 liter of water and I’m hoping things will improve.

I also used an epsom salt foliar spray a couple days ago. Maybe I put too much.

I feel like the first 3 weeks started off great and they were thriving but now they seem so small and flimsy looking.

I probably should’ve took these photos before removing all the yellow leaves but there were about 2-3 large leaves per plant which looked yellow and droopy so I removed them.

I also included the Max and Min hydrometer stats in the pics. The humidity got really high last night because I left the side of the tent open it’s not usually so high.

What do you think the issue is? Underwatering? 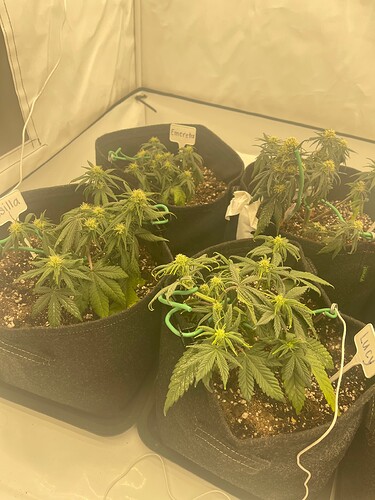 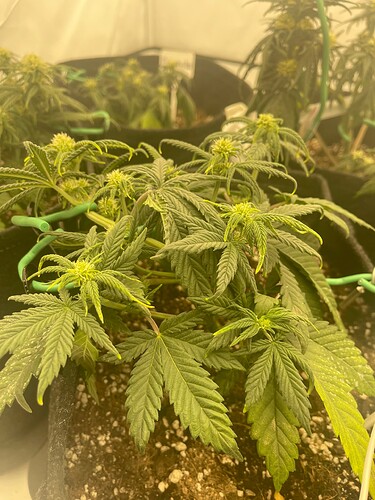 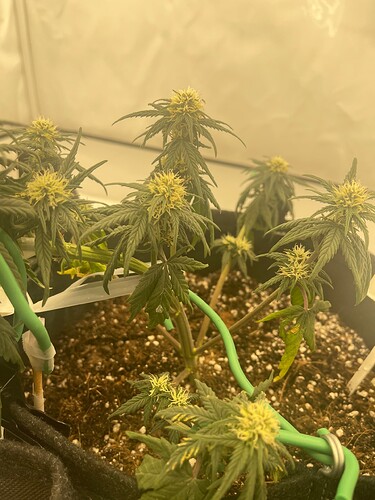 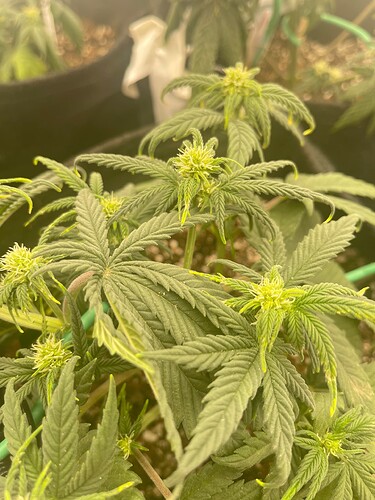 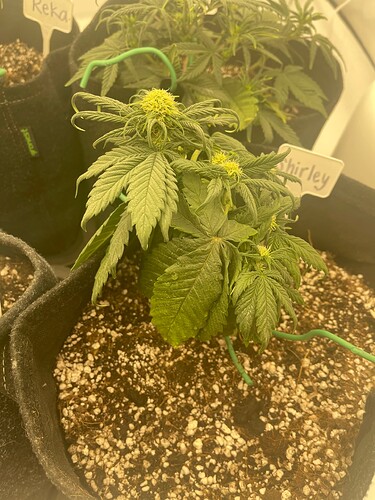 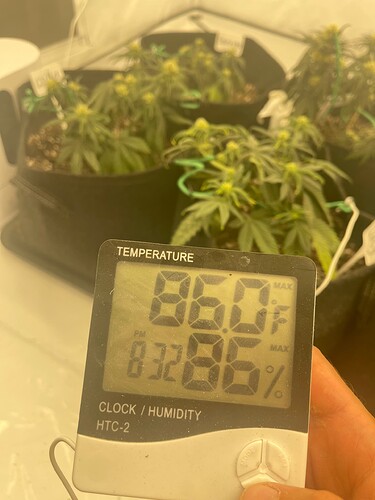 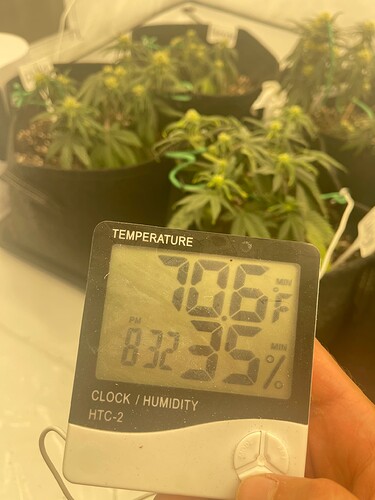 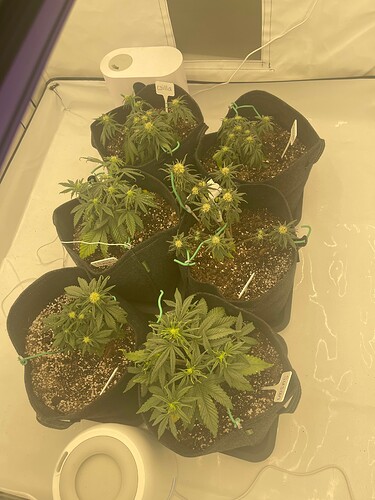 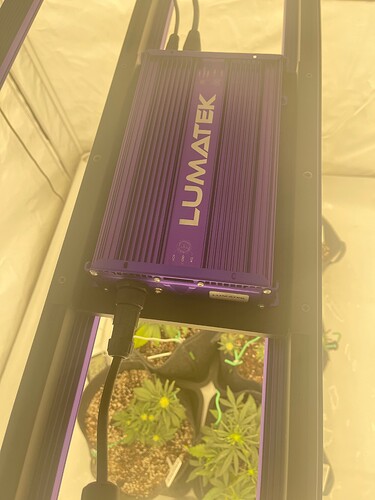 Welcome @eddielovett .
This does look like a watering issue.

I also used an epsom salt foliar spray a couple days ago.

Personally, I recommend you do not use ANY foliar spray. Cannabis does not tolerate wet leaves very well.(at least indoor grown)
The majority of growers here water by how light the pot is. Wet/Dry cycles are preferred. Drench to about 20% runoff then let dry completely.

Yeah I noticed ever since I sprayed the leaves it’s been getting worse. And I’m top of that they had the high humidity last night.

Do you think they can recover from this if I start watering correctly as you suggested?

Do you think they can recover from this if I start watering correctly as you suggested?

I will call the cavalry and we will do our best to help you get your best.
@PurpNGold74 @dbrn32 @Nicky @Myfriendis410 and any y’all want to call in as well.
It is late in the grow but you have gained a ton of knowledge I am sure and will carry over to your next grow.

This will help answer a lot of ? ahead of time.

How to make support ticket

Always try to upload a clear picture of any issues you may have to allow the community to assist you.

Add anything else you feel would help us give you a most informed answer should be included. Feel free to elaborate, but short and to the point questions and facts will help us help you in a more efficient manner

Thanks I’ll make sure to include those variables in the future. Yeah I’ve definitely learned a ton and I’m excited to not mess up the second grow lol. So glad I found this forum!

I have never ever judged by lifting of the fabric pot to determine when to water. I just know from growing all kinds of things these last 40 years.

Others do for sure but when you have a 8 foot tall plant indoors, good luck judging by lifting.

I should have added “with certain exceptions” like 8’ photos and freakish large autos.
Also obviously is hard to lift a pot that is under a scrog net.

Just messing with you. Thanks for the laugh as I really needed it. USPS screwing me around and now they 86’ed my package.

You should look at my girl. She is growing at a crazy angle. I never had this happen before. I will get a picture of that up after lights turn on.
I call her a mutant.

I typically stick my finger in the soil an couple inches and only water when it feels dry. Are you checking the ph of your water?

Your temp needs to be around 80 and humidity around 60. Test your watering to see if you can water every couple of days and not do much at one time. At their stage properly 2 water bottle size. But for now let them dry out little and you’ll probably be fine. Now when they start packing on you’ll need to up it a little to prob 3 every 2 days. Maybe more as some eat more than others.
If you nute I wouldn’t do more than half and not till she shows she is flowering. Theirs more ways to grow than people. Good luck

I used to do that but now even after 5 days no water it still feels moist in the center. I think there’s too much coco coir.

Yeah I let my tap water sit out for a day or two to dechlorinate and the ph is 9 so I add a bit of apple cider vinegar to get it down to 6.5.

Then I mix half of that water with ph 7 filtered water that’s been warmed up.

I used to just water it and leave but today I stacked it with 1000ml and picked up the pot to let the water drain out the bottom. Some of the pots had much better drainage than others. The ones that always feel moist in the center had poor drainage. So maybe the roots are drowning on those and that’s why the leaves are droopy and curled down.

Just checked on them after the watering and it’s a pretty noticeable difference. The leaves perked right up so it was definitely an issue of underwatering. 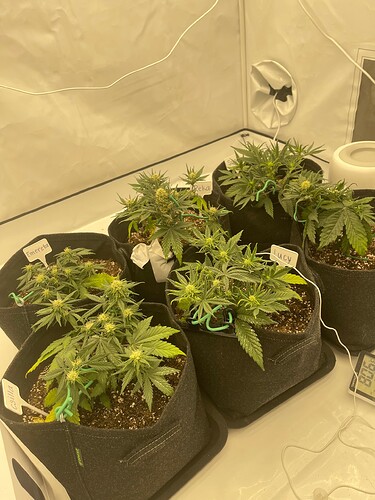 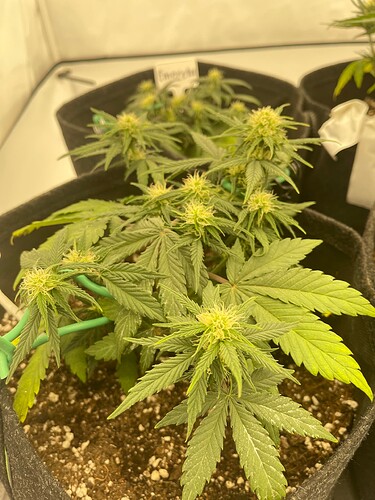 But now they’re doing something strange and the leaves are aimed upward. I read this “praying” can be a good thing if the plant is healthy but since some of the tips are yellow I figured it’s light stress so i lifted the LED up a bit. 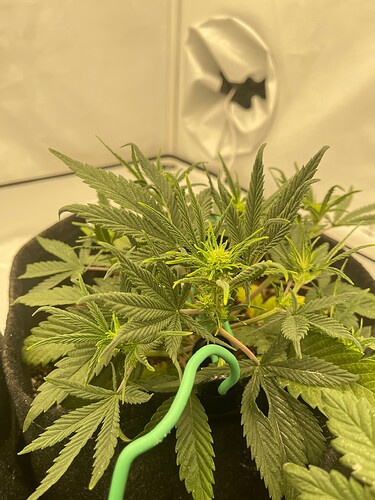 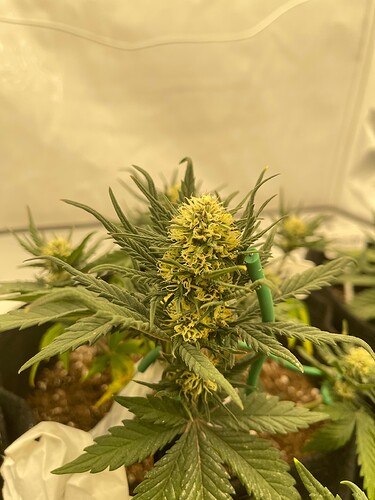