Hey folks. I just harvested my last grow. That was grow #4 for me. Still trying to learn and get better at this.

I am starting this new thread to track Grow 5. I am playing catch up a little as I started these girls from cuttings I took back at the beginning of July. After many unsuccessful attempts at cloning I followed Hellraiser’s Beginners Guide to Cloning and BAM, i’m a cloner now. If you haven’t read it, it’s a great thread.

So, these girls started as cuttings from my Strawberry Cough and Hindu Kush. At one time, I had them CLEARLY marked (ahh a mind is a terrible thing to lose). Unfortunately, once they successfully popped roots, I was so excited to transplant them that I picked the best 3 plants and umm… somehow they got separated from their tags.

I posted their baby pics on my last thread but will pick a few just to provide a little history for this grow. Now that I am a cloner, my next challenge (yeah other than the tag thing) was that I took them a little early. I had the challenge of trying to keep them small in my little 2x2x3 nursery tent until there was room in the big tent. 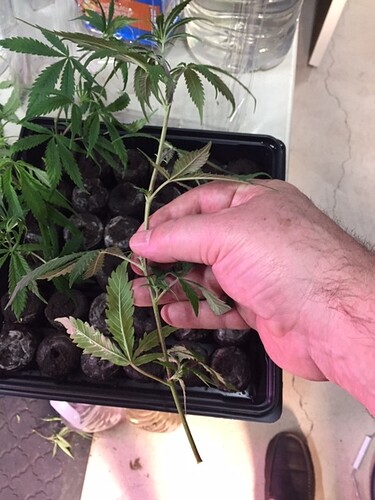 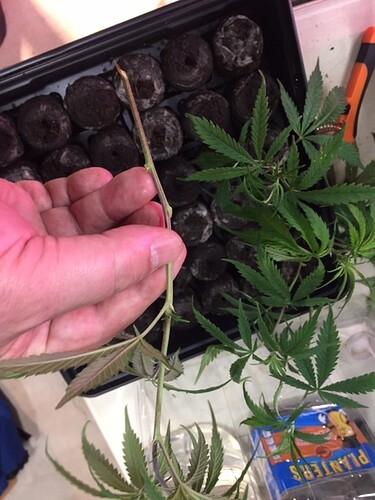 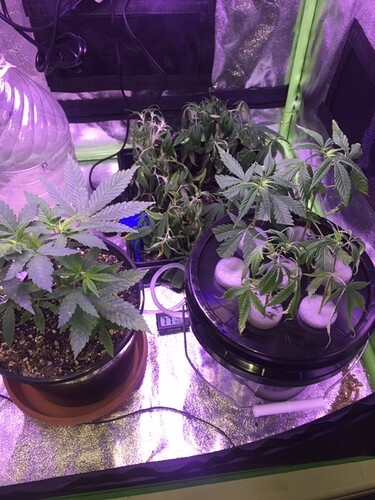 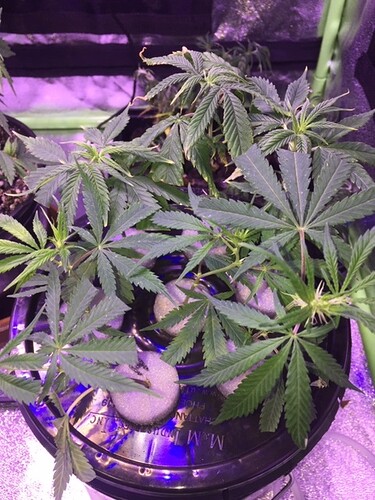 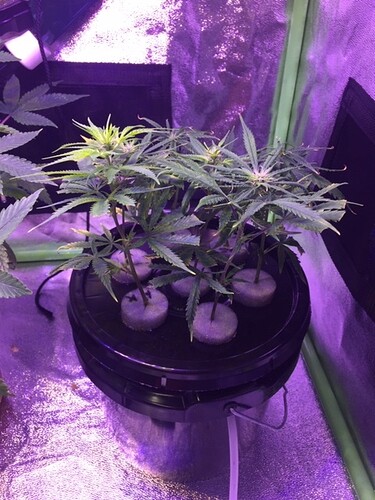 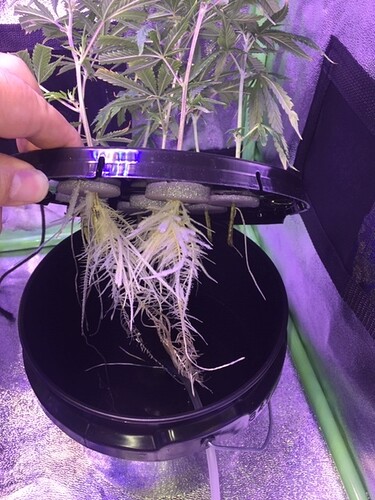 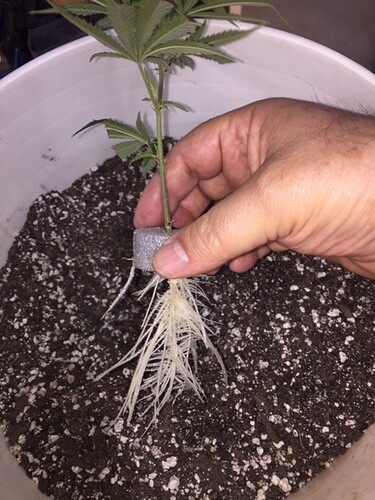 I purposely kept them in solo cups, provided little in the way of nutes and severely cut them back. I used some benders to try to spread them out as flat as possible while they were still bendy. 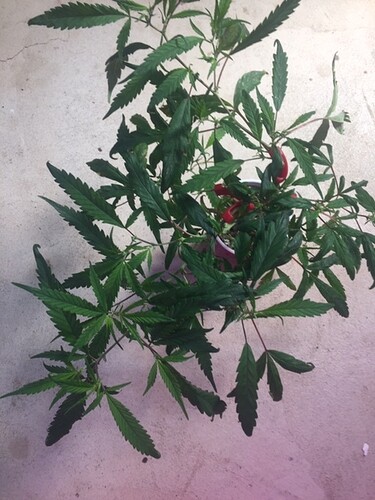 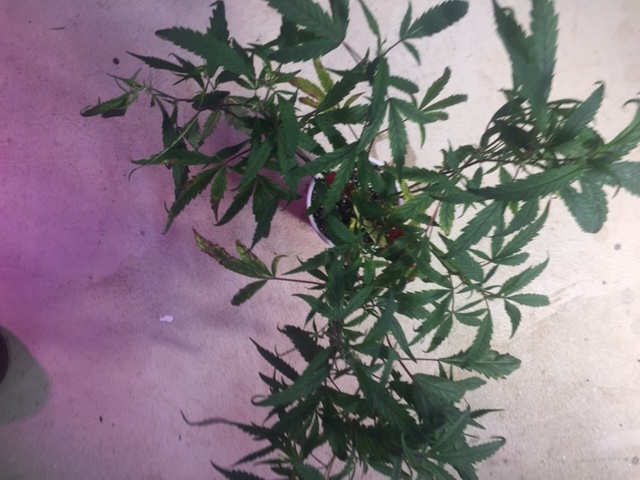 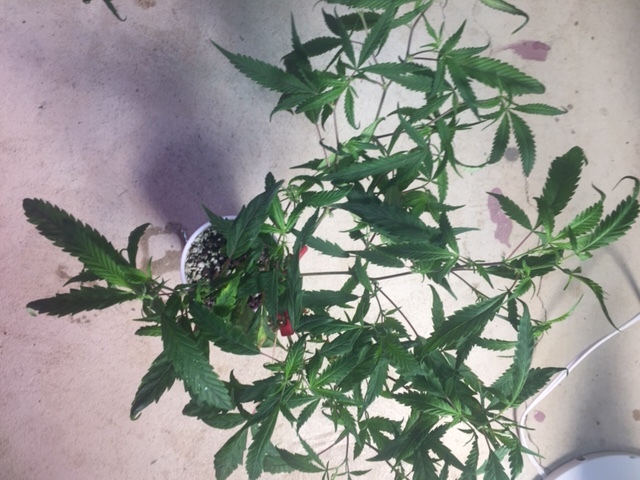 YESTERDAY - Sept 12th
I scrubbed the big tent, popped them out of their solo cups and put them in 5 gal fabric bags. I neglected to get pics of the transplant as it took ALL day in between everything else that was going on, but I will get some fresh pics of them in their “forever homes”.

I used FF Happy frog which I cut with 25% perlite. I was a few gallons short on soil so added approx 2-1/2 gallons of an organic potting mix. (desperate times).

It appears to be mostly peat with some compost. No time release fertilizers listed. 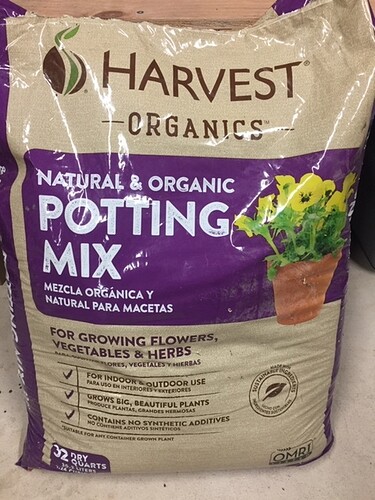 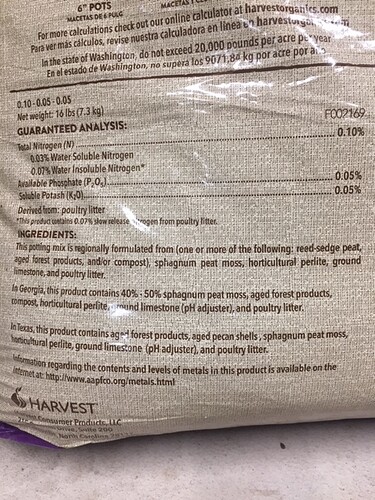 Finally, they will be sharing this tent with a seedling that was too late to make the last grow. She too was topped, LST, kept in a small pot, and generally only fed enough to prevent severe nutrient issues.

Pics to follow. This is gonna be an interesting one. Let’s see how fast they all recover with some good light, good soil, solid feeding plan with Jack’s 3-2-1.

Love to hear your feedback.

Along for the ride. Good luck. I’ve got my fist clones on deck. 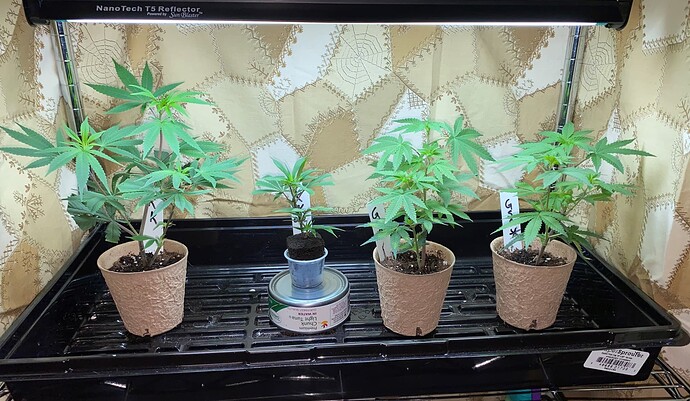 Newt, VERY NICE Clones you have there!
Don’t know about you, but being able to do this really was a feeling of accomplishment for me. I have only purchased seeds through ILGM and have had almost a 100% germination rate, but my success to get them to viable 4 inch plants has not been impressive. Being able to roll my own is pretty darned cool.

Which method did you use to create them? i was never successful using peat pods, but the cloner (and a great guide) change all that.

Welcome to the thread. should be a party!

Thank you! Means a lot hearing that from you. I do believe I have spent more time reading your threads than I have spent growing. The folks on this forum are priceless.

I cloned in the 3 in peat pots in rockwool cubes. The new (little one) is in a Root Riot cube. I’ve documented it in Hellraiser’s Cloning thread. That thread is awesome!

Just stumbled across this. Great thread, thanks for this! Here are my 1st attempts at cloning. I took 3 cuttings from my Kandy Kush plant and 2 from my Girls Scout Cookies. 2 of the Kandy Kush clones didn’t survive, but I recently moved the other 3 (in their rockwool cubes) to soil, and have roots on all 3. I went with peat pots, so that when the time comes, I can just drop them in the grow bags (that will work, will it not?). Now I just need to keep them alive and fairly short until my curren…

Finally. grabbed some pics of them all settled in 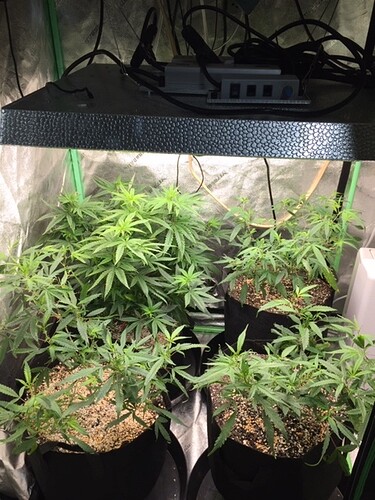 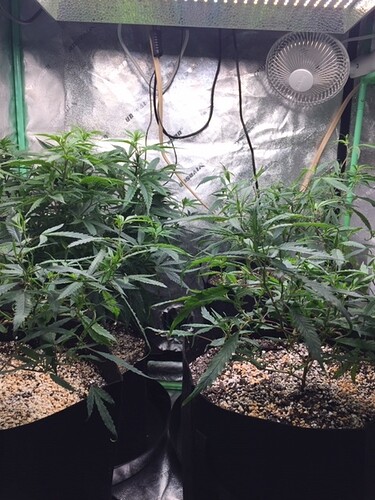 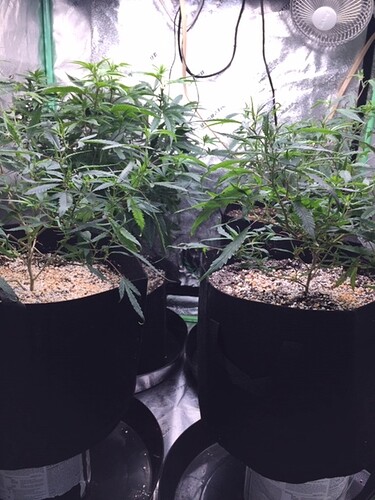 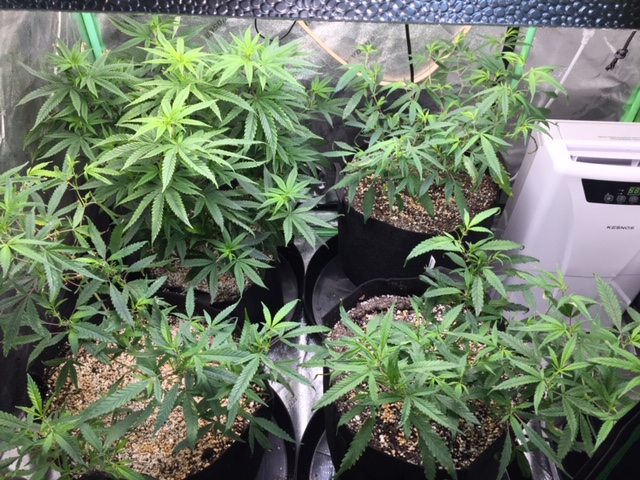 After they settle a bit i may start tying and stretching them out. need to start establishing a nice branch structure now that they arent all jammed together

Ok Peeps. Happy Friday. today, between calls, i managed to pull them all out one at a time and LST them til they moaned. they are still looking a little worse for the wear from spending so much time in solos jammed in a 2x2 tent, but i think they will perk up soon.

They were still damp today so i think tomorrow will be watering day. should get some updated pics then.

Here they are. getting acclimated to their new space 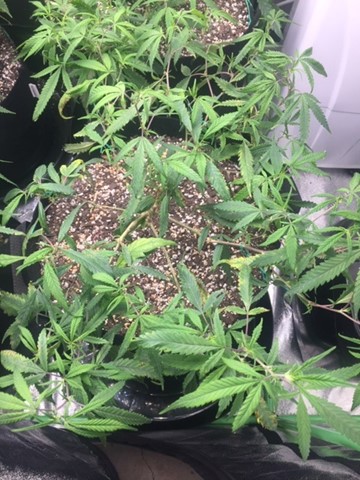 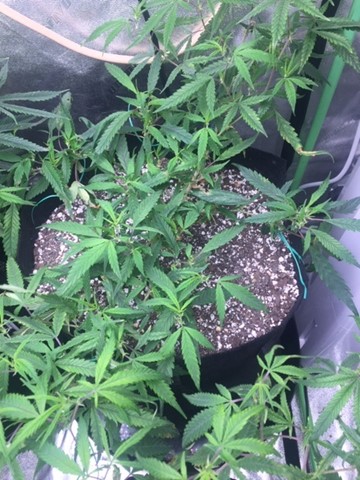 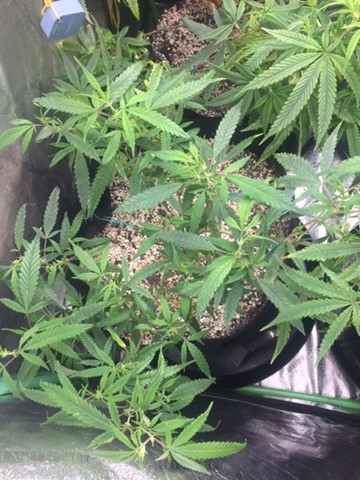 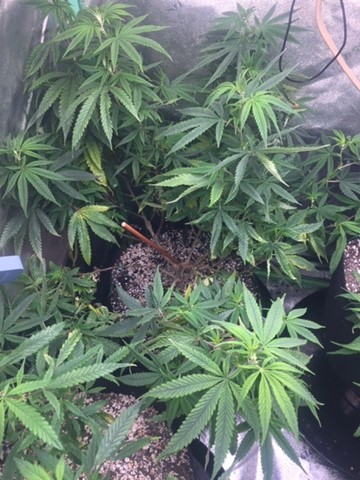 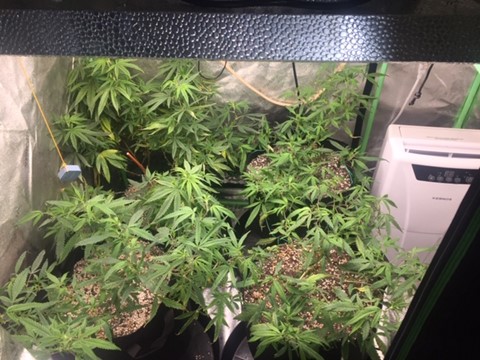 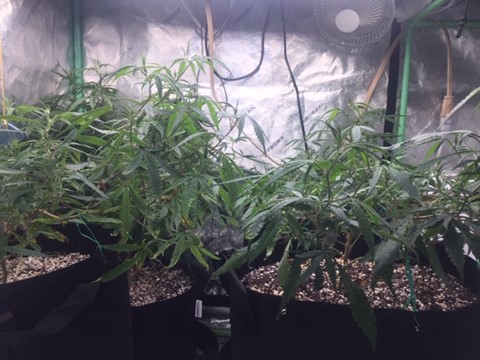 How time flies.
Hey fellow grow peeps. I cannot believe we are halfway through October.
Halloween is almost here and i never planted any Pumpkin Spiced Weed. Maybe next year.

Work has been absolutely kicking my butt so I have barely had time to care for my girls let alone post, and worse yet, haven’t been able to keep up with all your threads. Sometimes i think i like reading what you all are up to and trying as much as i like my grow.

So, anyway. i realized that mine were probably ready to flip a couple weeks ago. just pulled the trigger this week. flipped them to 12/12 and started them on the Jack’s transition feeding. I am starting with 5 gal of RO water and adding 10g each of Jack’s part A, Epsom and Jack’s Part B along with 6g of MKP and Fulvic to kick start Flowering. I will follow that for 2 weeks before flipping back to Reg Jack’s formula.
I am also feeding Fish Sh!t and recharge at every feeding (after the initial watering).

The girls seem happy! i saw some start of what looked like it could be the claw, so i will keep an eye on that, otherwise all is good. they appear they are ready to take off at this point. 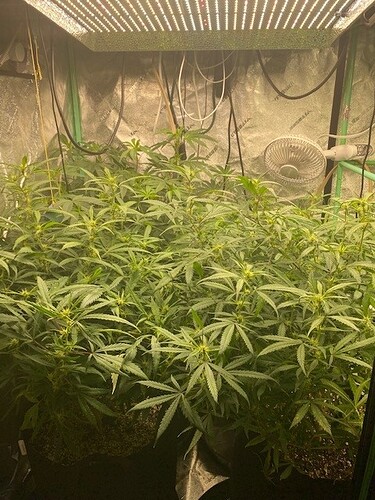 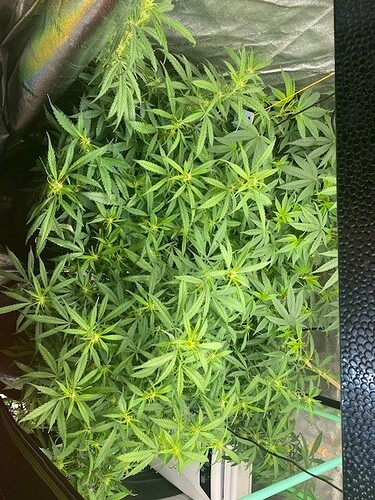 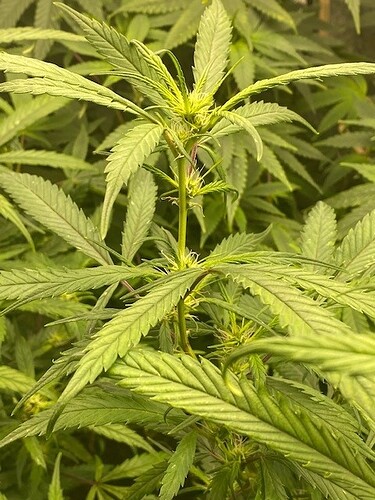 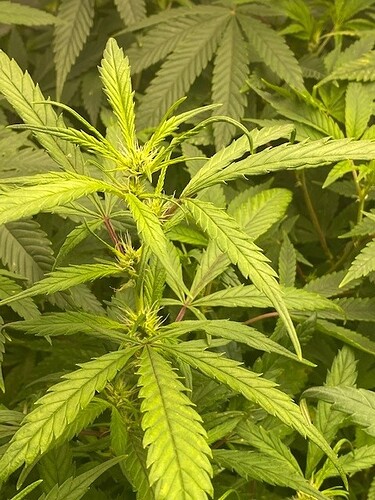 The tent is FULL! I have 4 plants in here and its a lot more crowded than i have had previously. i do think i prefer just having 2 plants in this 3x4. just easier to access. and since i harvested 1LB from 2 last time, i think that makes good sense. It will be interesting to see how this grow turns out with the more crowded environment. i REALLY want to prune these much more heavily to encourage fewer but larger colas, but i am holding off for now. i would like to wait until its time to take clones before i lose all these branches.

One thing that i need to deal with soon is trying to figure out exactly what i am growing lol. this is my first grow using all clones and unfortunately, i inadvertently lost my name tags when i was sorting the clones to pick the 4 best for planting.

So, i am wondering if i have any options at this point. @Hellraiser, @Nicky, @dbrn32. i was re-reading one of your threads where you were discussing sending plants out for DNA testing. I am wondering if that is an option to determine the strain. I believe that these are Hindu Kush and Strawberry Cough, but i am not sure if i have 2 each, or all one kind. I was wondering if you think that is a good use of the testing and if so, have any recommendations for companies?

It is a option but it’s not an affordable option, strain shotgun DNA testing is about 350$ USD a sample.

Also worth noting that even if you paid for genetic profiling a sample would have to be already on file.

Hmmm, that takes all the fun out of it. Since they are clones i have a very nice harvest from both of their mothers, so I guess i will let my wife sample and identify once i harvest.

besides, she sexts with me for free

10 pack of farmer freeman. I got Brian to buy some to.

There is a company out there that will give you a discount if they don’t have the strain in their database… I forget who it was because at that price ti doesn’t matter to me regardless.

I’d just grow them out, maybe you can tell the difference in late flowering or after harvest with a smoke/taste test.

Thanks for responding! yes, based on the possible costs that @Nicky mentioned, I am thinking this may be up to my QC girl (my wife) to decide what they are. since its a 50/50 shot that each is either the strawberry cough or the Hindu Kush I am thinking she will be able to tell. The Kush is her “night time med”.
Also, when the mother was growing strong, she had leaves that were much more slender whereas the Strawberry were def fatter. so maybe as they mature that will be a visual hint.

the leaves on some of these are still a little odd. when they were young clones i had some leaves with only 1, 2, or 3 fronds on each leaf. they have gotten better as they have grown, but you can see they are still “interesting” 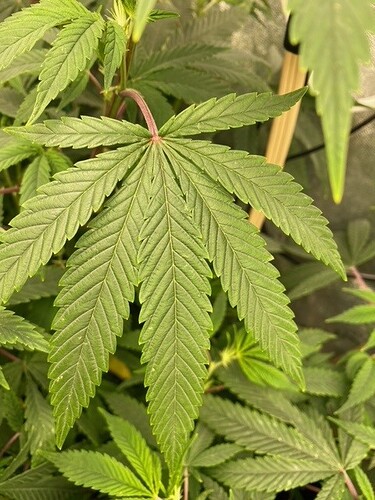 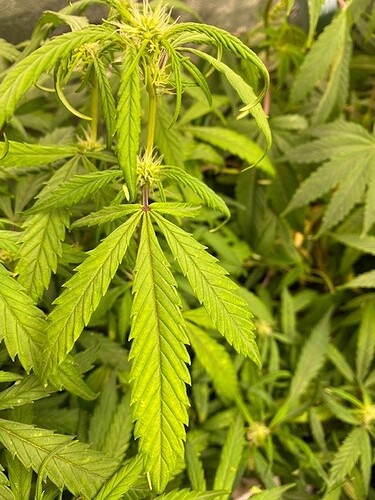 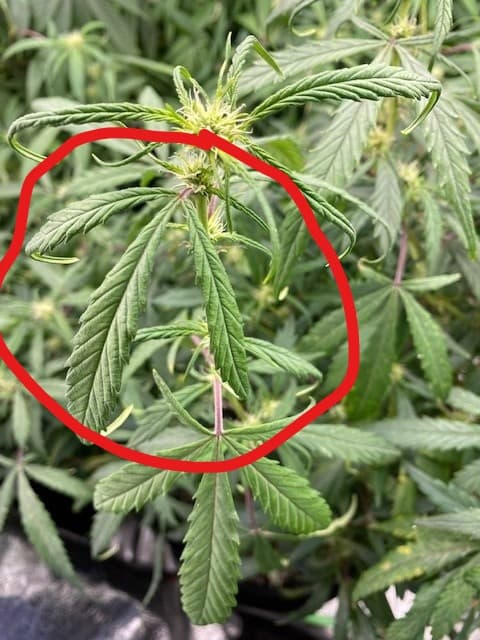