Just a couple quick pics of 2 Goldleaf growing in coco with multiple feeds daily in a drain to waste style.
Both Goldleaf were planted at the same time for comparison of how they grew.

#1 was topped at the 6th node for fun and to give the other a chance to catch up. This caused it to Bush out like no other and I had to LST the main 2 and several secondary colas out of the way for airflow. 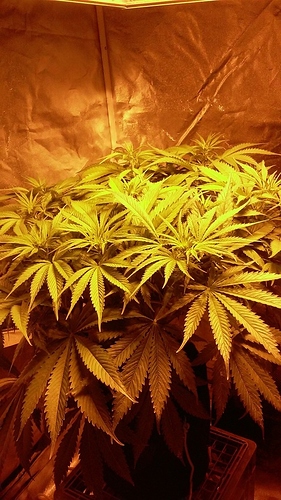 530×942 236 KB
#2 was always lagging behind from the start. I did top at the 4th node and found that it grew alot less dense. At the start of flower it was several inches shorter than #1 but is now a couple inches taller thanks to stretching without LST. 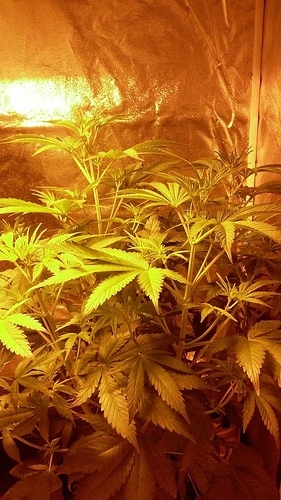 They at looking great though buddy, nice job and I have noticed that as well, some strains when you do multiple they one always lags behind lol

True that! Goldleaf has been a fun strain to grow

and they have been perfuming the house since like week 3 of veg lol.

Lol nice man, my purple urkle strain does that

lol, my tent isn’t vented to the outdoors. I know what it will smell like in a few months. My wife, on the other hand, has no idea.

(can’t keep her hands off and out of my plants)

My wife wont touch the grow but is a master at hovering over me while I feed and rotate them lol.
You can’t smell anything outside from venting thankfully, the oversized carbon filter works like a champ, not that it really matters. We live on several acres about 20 mins from town with no neighbors.

My wife doesn’t use marijuana (more for me) and she doesn’t love the smell quite as much as us. I’m sure I’ll get tired of the smell eventually.

The plus side is your stash lasts longer than ours will! I never get tired of the smell, I just become “nose blind” to it :sadpensive:

Her feelings don’t slow me down…vaping, reading, typing and watching tv with her a few feet away

I do get tired of the smell, during the harvest/manicure…

For days after, it’s all I can smell, intense, oily, under your fingernails…

Lol yea I won’t let her get near the garden any more ever since we had the kid, only me and she doesn’t do any growing, I do the cultivation and she does trimming we both smoke it, but she sure does hover when watering and feeding gets done lol. And yea I agree 100% I go “nose blind” to the scent of weed unless I get a strong batch from a friend while waiting on mine, my plants are always pungent smelly girls lol and you can’t smell them outside only inside until I start growing outdoors again

Buy a box of surgical gloves. That way it keeps all the oils and trichs off of your skin. First time someone suggested that to me my mind was blown lol. How the heck did I never think of that before!

And also you can scrape those oils off the gloves and smoke it as soon as it’s scrapped off, stuff gets you high!! Lmao throw it in a pipe, and excuse my language

Finger hash and scissor hash! Nothing goes to waste lol

Exactly Lol, use 100% of the plant let none go to waste

I’ll try gloves, don’'t like the idea, but worth trying.

The garden is my secret, no one but me works on it. They were outside and they were bushy…I’m smiling now remembering them. But, lots of manicuring, hours every day for days.

just a thought try holding a pair of growgles over the lens then take picks they block the orange effect . saw this on a you tube vid , then bought a pair but mine are the dark ones .and now i can see the green from yellow better…