The beans were from a dispensary here, but the genetics are apparently from BC Bud Depot and there is VERY little info about this strain out there. I was basically being a cheapskate and got them because of their low price. The fact that they are a canadian outdoor hybrid, heavier on the sativa end (70/30) was a definite plus for me. If you know anything about this strain, please share!

from sprout to ~ 4 nodes under cheapo blue LED lights @ 18/6 in a basement until the nighttime outdoor temps rose, eventually moving all of them outside in mid May.

gender ratio: 80% female.
chopped the weaker male of two and plan on attempting to prune, isolate and collect pollen from the sturdy one for selective bud seeding. (more on this later, i have many questions).

I have been pretty disappointed with FFOF (my first time growing in this soil mix) because of some wild pH swings I have been recording. Admittedly, I can take the blame for some of it, having bought a very cheap pH meter and not truly grasping the rationale the first few weeks of testing runoff (@dbrn32, @Bobbydigital @WickedAle can all attest to my ignorance - thanks for the patience, guys)

I started them in 4in sq pots and potted up to 1 gal once they started showing roots in the drainage holes - then once again to 5 gallon pots, probably a hair too early. I didn’t start feeding them until after they settled into their 5gal homes because the FFOF is known to be pretty hot and some here have gone nute-less through flowering in that soil mix.

LST since about 4 weeks old, attempting to bush them out as much as possible - not really for any reason other than I enjoy it. Height isn’t really an issue in my space out back. That said, there was a plant stolen from a neighbor’s yard last year, so I guess I cant be too careful (fkin tweakers!) Some of them have a really great rollercoaster look on the main stem. I have accidentally topped two and purposefully tried out FIMMing one for fun. I have lots of growth nodes to play with from the LST.

As mentioned, I have come across some pretty nasty pH issues; wrinkled and deformed leaves and a completely runted plant for what seems like months. Half of the plants didn’t seem to even notice and kept growing without any signs of distress… the other half, however, have been struggling off and on. After I potted up to 5gals back in late april, I got a handle on the pH and growth took off. Even the runt started coming back to life. The plan is to move to a supersoil mix for the next and final transplant.

That brings me to now - I have a pretty decent little hedge coming up in the back yard. The runt has broken out and started making a run at it, the rest are filling out nicely - some are really really bushing out, others are slowly filling up.

Its pretty interesting to see the differences, little and big, in the plants of the same stock. I will have to document that here in photos later.

But for now - thanks for reading and to those of you who have answered my multitude of questions simple and complicated - thank you for all the help so far!

here’s a chronological stream of photos of the grow so far! (sorry for the shite photography) 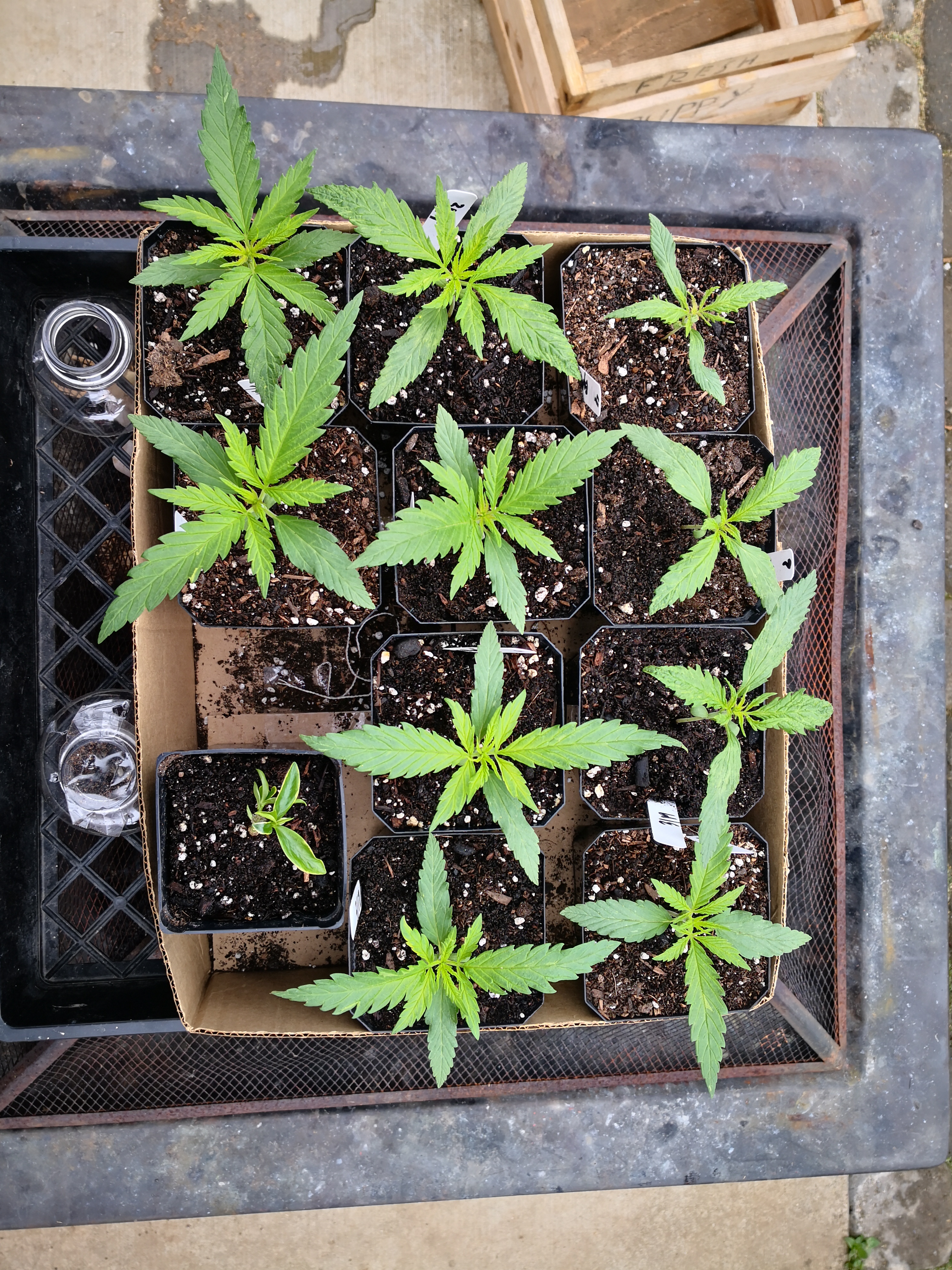 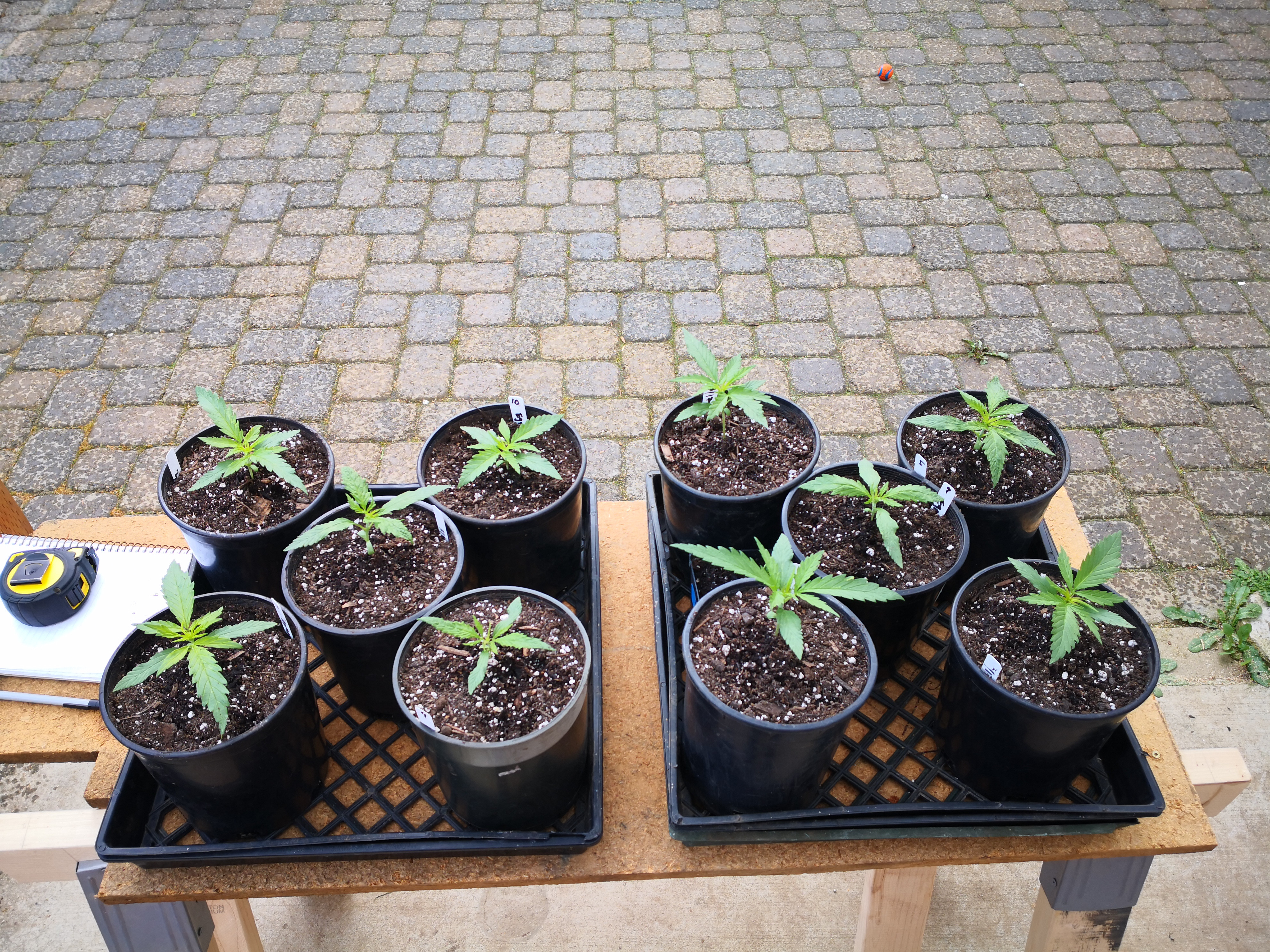 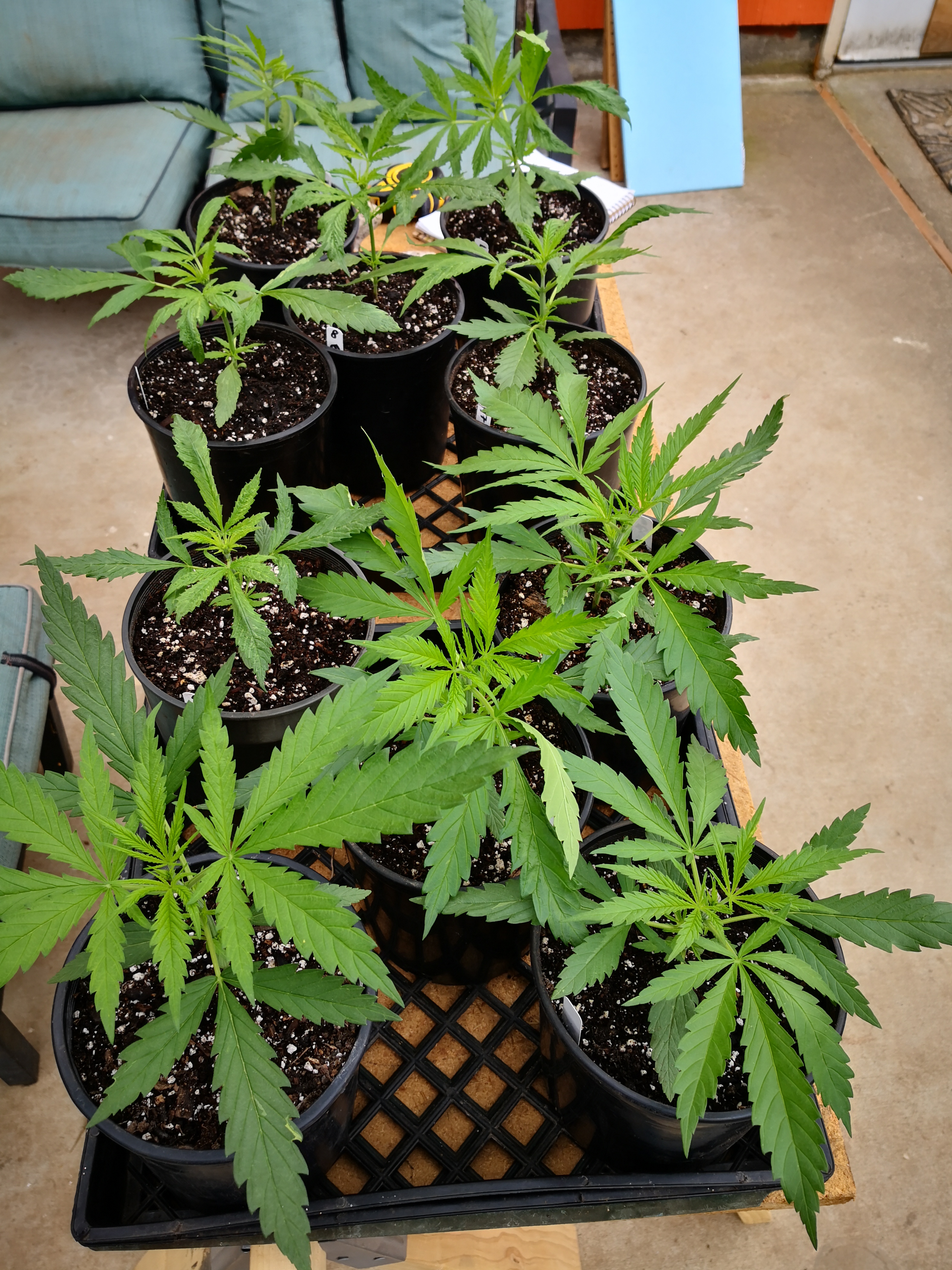 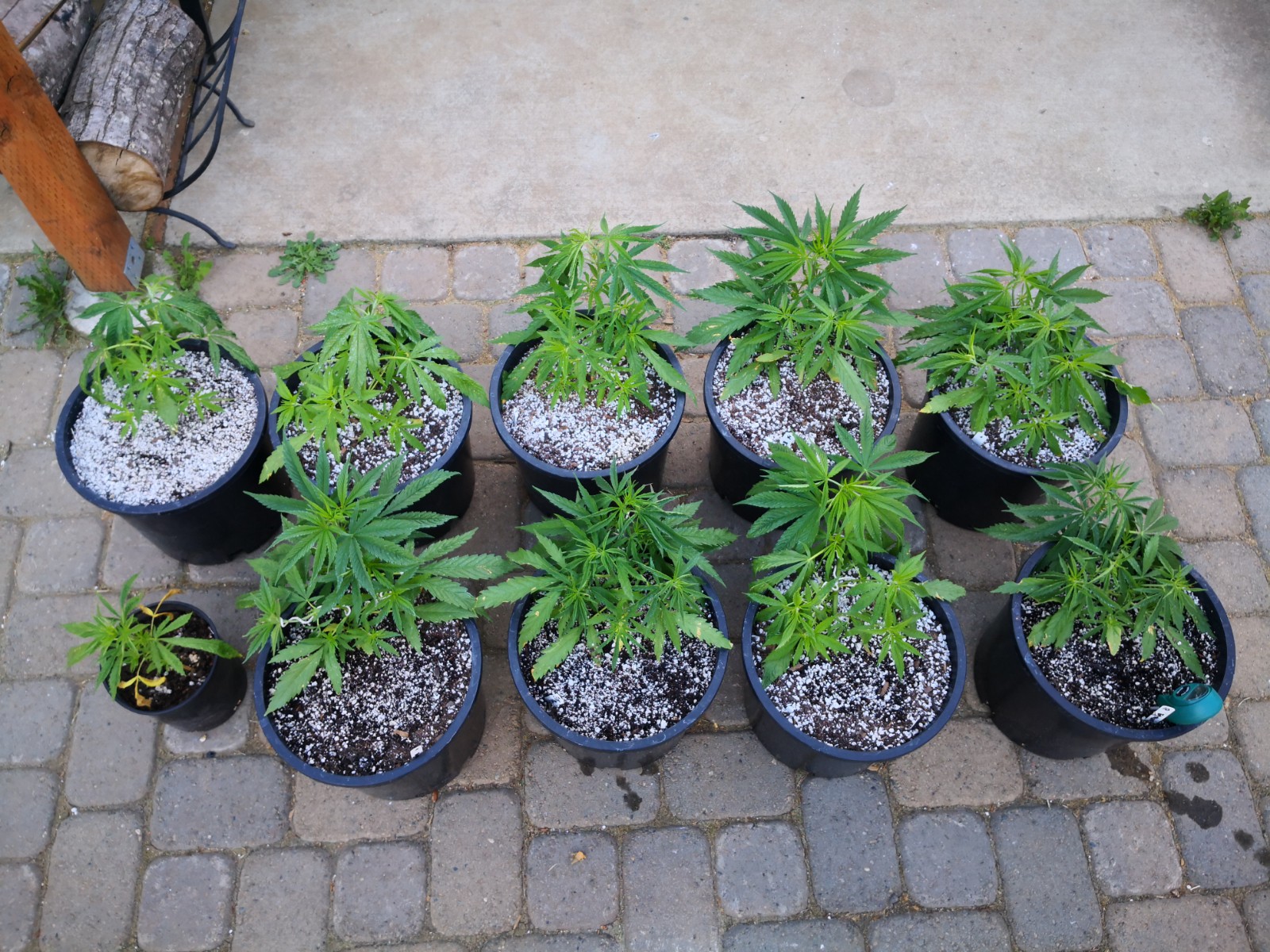 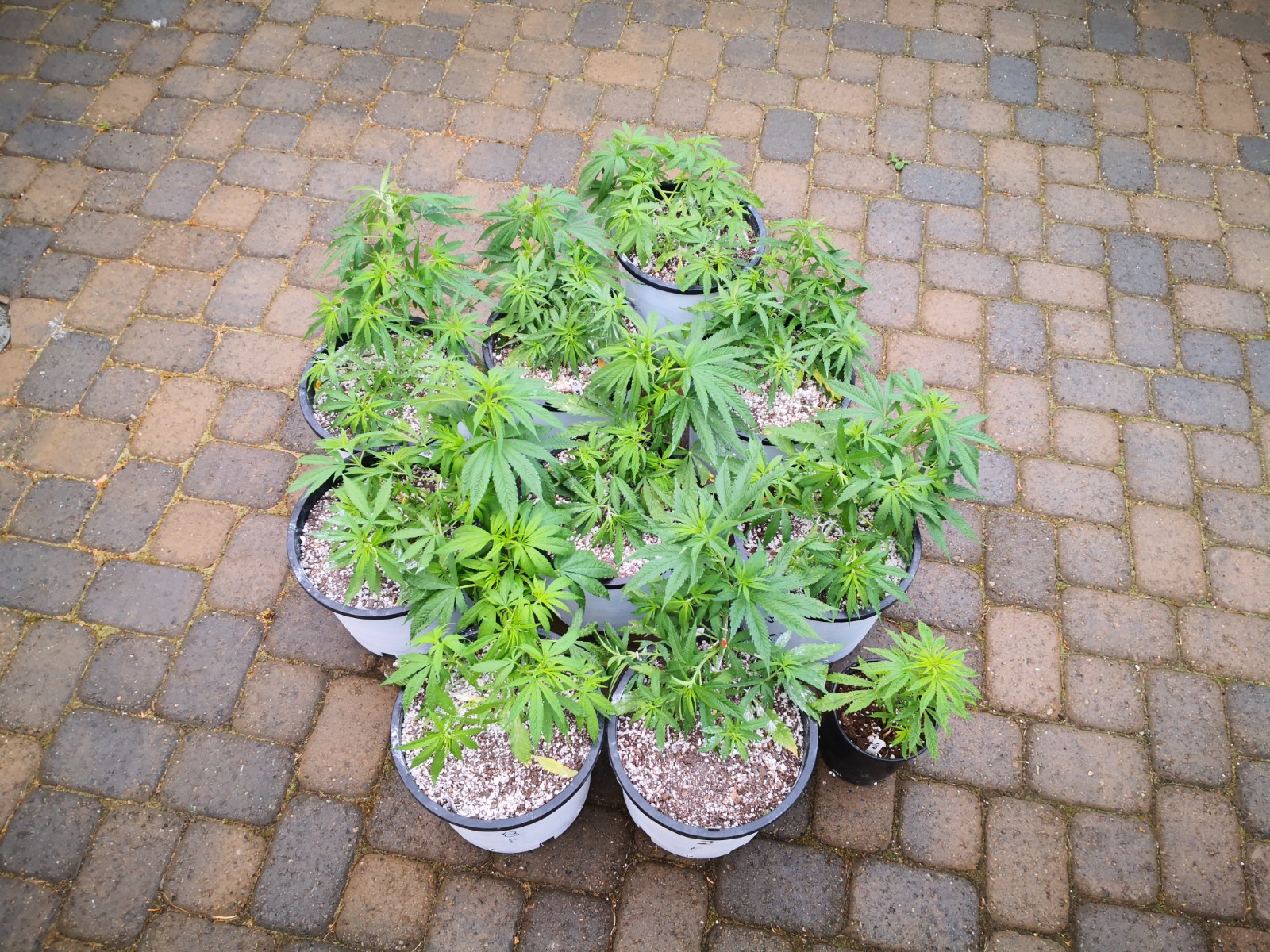 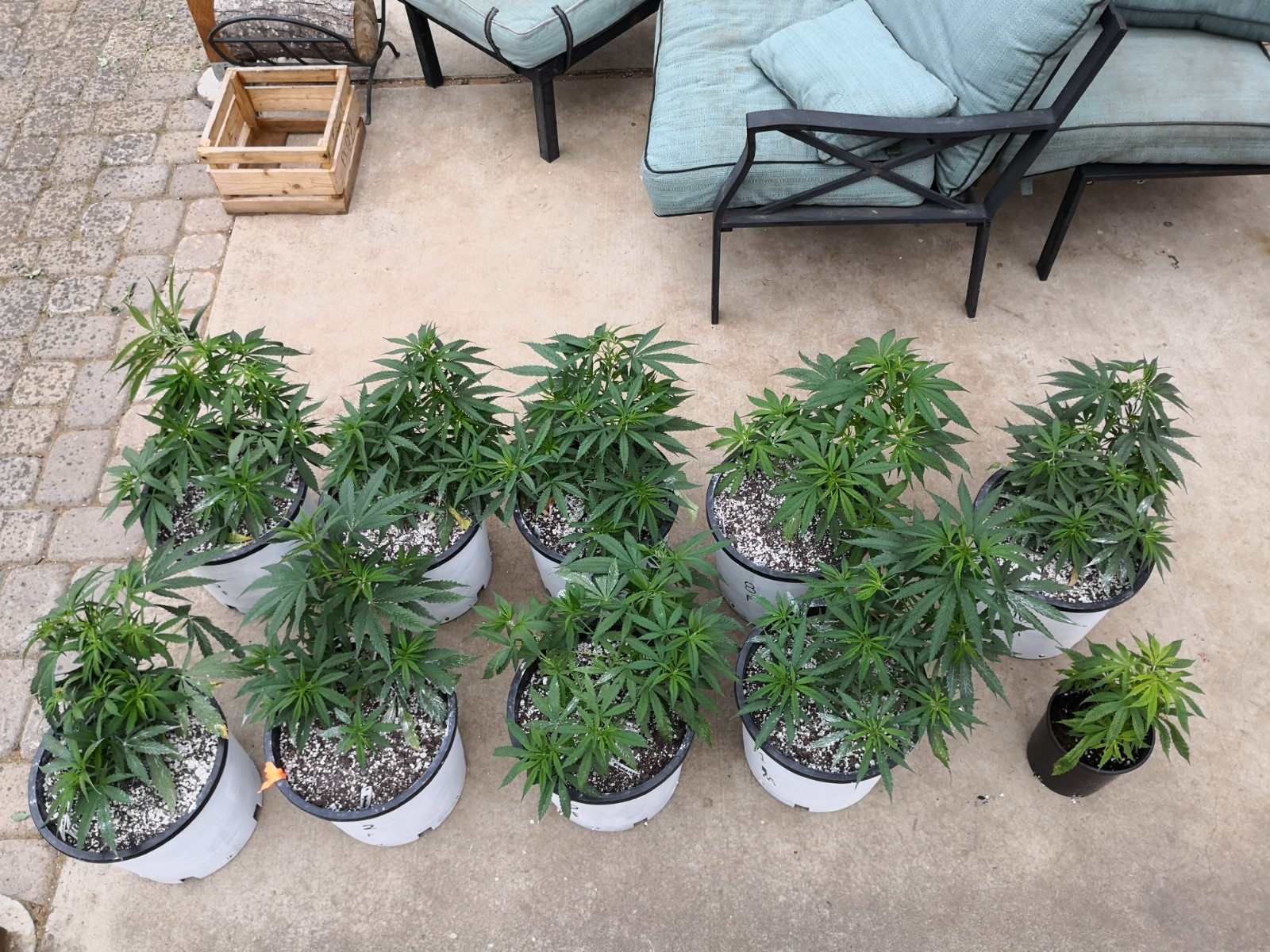 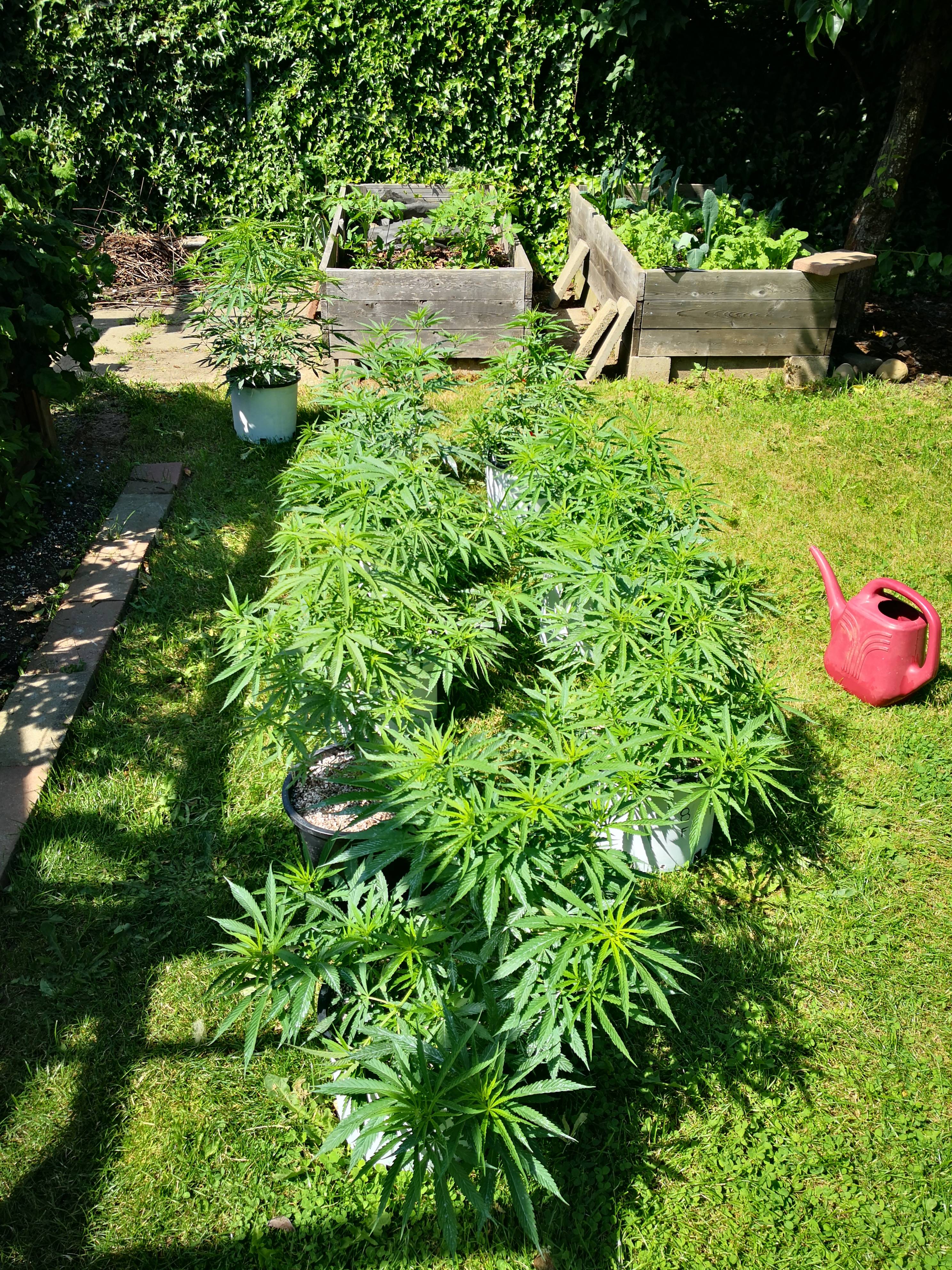 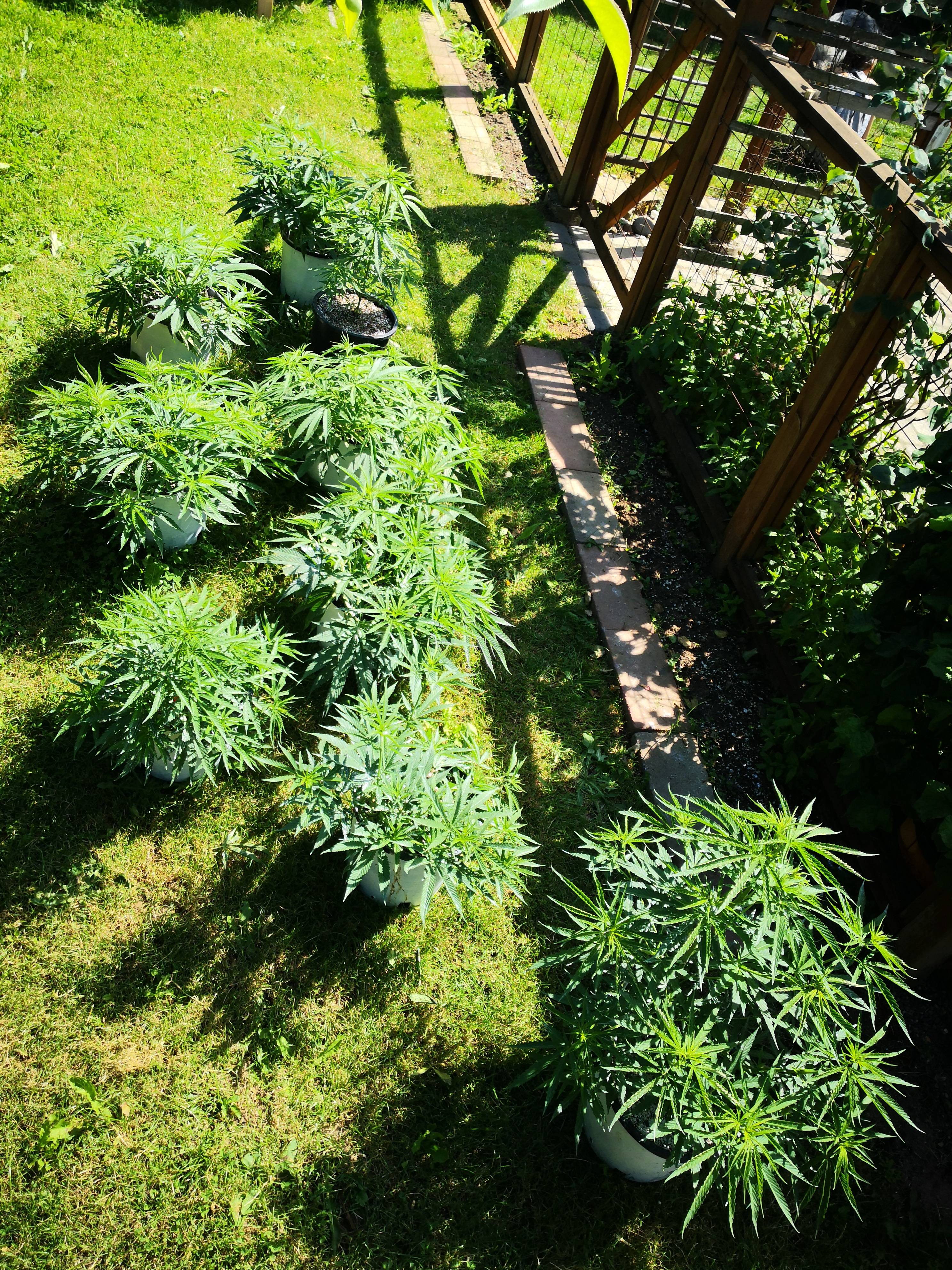 Wow, at the harvest that will be! Nice

@dbrn32, kinda… the pH is actually swinging back toward acidic this time and I’m seeing some of the familiar leaf damage on a couple of them. Difference is, this time I know what needs to be done! Gonna try to get them out of this soil and into something with a bit better control.

Just gotta figure out if I wanna go 10 or 15 gal for their final potting. A little worried that 10 won’t suffice thru to harvest. Never tried smart pots before, so maybe root binding isn’t as much an issue but I’d hate to go thru the trouble to find out theyd have done better in a bigger pot.

Looking good man that’s going to be one big crop

I’ve done the make isolation/collect pollen thing, so when you are ready!

10 gallons too small in my humble opinion. What temperature swings, range, do you expect?

I like these 30 gallons in tan, good quality, the 25 gallon a good size too. 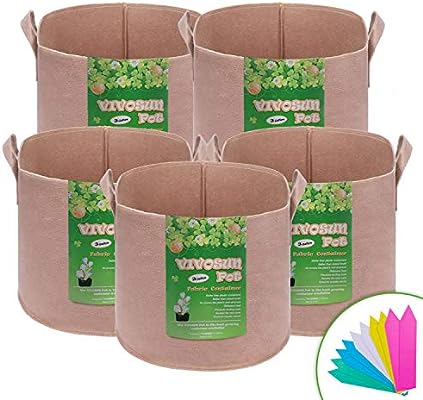 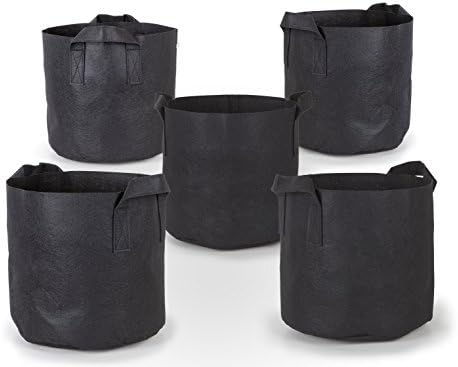 If you’re ahead of the game on outdoor grow I agree with the others, bigger pot is probably ideal. Otherwise I think you’re doing a great job.

Thanks all, nice to hear that it’s looking on track. I’m waiting on blood and bone meal, as well as dolomite for the soil mix this week.

And as for pots (@Big123 and @dbrn32)… I feel ahead of the game but I’m a little worried about going so big given the rainy season we get up here around the end of flower. Maybe @MattyBear can speak to that some since he’s grown outside here… But I guess I got the big bush jitters. I’ve never had to deal with budrot ( well, not beyond a little, anyways) and I’m a bit concerned that I won’t have the time to monitor these things close enough to catch it if it crops up. I know so little about the strain that it might be resistant or sensitive just the same.

30 gal seems crazy! 15 feels huge but I guess I need this to be put in perspective by those who know better.

If I did 15 or 20gal, could I get away with a 1/2 recipe super soil or will I need more coverage? Currently I’m set up with 4 bags base soil (roots organic) and a 15 lb bag of castings ( along with the amendments in boxes up to 5 and 7 pounds). I also subbed in down-to-earth seabird guano (0-11-0) for the bloom bat guano. And I couldn’t find powdered humic acid, only granular, though I’m sure I could crush it down.

Finally, is it okay to go CaC lime powder instead of dolomite lime? These are probably better suited for the supersoil guys like @garrigan62 @Skydiver @aaa and whoever else might be out there.

If you need to move the plants around, 15 is probably the max unless you have wheels.

I’m debating on potting up on my 10 gallon plants right now. I’m in trouble as I have too many plants and don’t want my 10 gallon skunk plants to get huge, but I’ve got 2 more months of veg at least, plus stretch.

I’m going to probably start a thread asking the question, can I leave my already 3.5 month old plants in 10 gallon containers?

I’ve got 30 gallon bags on hand, but really don’t want the plants that big.

I don’t grow in big pots because I have neighbors all around and I have to keep it somewhat incognito. I am only growing autos so they finish in time and I’m more of an indoor grower than outdoor

Perfect, I’ll be watching you too.

I could dolly them around I’m sure, but I don’t know that I want to have to do that. I’m downright scared at how big these will go in 30gals. I almost want to do it to just see the monsters

Sorry… In answer to your question:. I’m new to the area but Summers can get hot here… 100 isn’t out of the question. Probably more likely 75-95 but I’m not sure yet. I do like the tan lines and the Amazon carrier is out of 10s right now, which may make my decision for me

I just am finishing an auto grow that had two 25 gallon bags, the 25 gallon bags were just doable to move and pick up, i used to cart to wheel underneath the porch when it rained.

I would go with the 15 gallon over a 10 gallon. 30 gallons and up I’m dragging them not picking them up.

I hear you, 10 gallon is a big pot as far as I’m concerned lol