First timer here with a couple of questions regarding the effects of incidental, artificial light after flowering starts.

OK, I get that flowering starts with less than 12 hours of sunlight. But, once flowering does start, is it critical to maintain more then 12 hours of complete darkness until harvest?

I have a couple of porch princesses. Once they start the flowering process will they be negatively impacted by:

To summarize, will this type of light impair the development of the buds and/or reduce potency. Am I missing anything?

Thanks for your help.

Dr. Bruce Bugbee has a video where he discussed that any light amount harmful to your pants would need to be bright enough to read the pages of a book to have adverse effects on your plants.

Many still cover LEDs and any other glow panels. I had 2 girls outdoor last year that are in line with a neighbor’s porch light and a street lamp (a little less directly) and I had no issues.

Thanks for the feedback.

That’s correct. But the levels according to Bugbee need to be high enough that a person could read the pages of a paper book.

Thats not alot of light though

I agree with you on that as well. I know that for my eyes, it’s more than any single LED, more than my neighbor’s porch light, and more than any digital panel on devices that are used in my grow.

Before indoor grows , there was the full moon once a month, with that being said, i wonder if the indians made sure to eradicate the males for sensi purposes. Lol

Some cultures won’t allow women around the crops during their menstrual cycles. I had a crazy interesting conversation with 2 super cool man Jamaican dudes about their family farms.

A full moon is pretty darn bright… doesnt hermie a plant. Different wavelengths of light other than whats commonly in sun light or artificial lighting seems to have less effect on plants too.
Ill go one further, hermie is a trait… its a genetic perpensity to make both female and male parts. Not all plants can do this. In general, any plant that shows a hermaphrodite expression is not suitable for breeding. That being said, one would need to pay a considerable amount of money to have genetic testing done to see if the gene is present and dominant.
In the majority of cases, many high end breeders will stress test for it rather than gentic testing. Far easier and cheaper.
As we know, photon energy from synthetic lighting, except lasers, diminishes rather quickly with distance. You imagine a grow light 6 feet away from a plant would likely cause the plant to stretch pretty hard to get closer. Conversely, if the light is really close, the plant would grow closer internodes in an effort to stay away from the intense light somewhat. The sun, on the other hand, is pretty much the same intensity at the top of the plant as the bottom, and 10 feet above the plant is pretty much the same. So with this in mind, a street lamp even 50 feet away has way less photon energy than required for photosynthesis.
In conclusion, Ill go out on a limb here and state that the majority of plants that show hermie traits have been bred with hermie plants, or plants that will readily show that trait. The gene is strong and needs very little stress to bring it out. In nature this is actually a pretty successful strategy and ensures offspring even in super bad growing conditions. For the cannabis grower, its perhaps the single worst trait to have in a plant.
That was my rant for the day… peace

What rant? Sounds like a very good working theory.

I gravitated back to basic earth science, outdoor events, position of sun when where spring summer and so on on initial reading trying to see correlation of manipulating mother nature indoors through various successful methods of grows.

Guys who have grown for decsdes had to sneak peeks when it was lights out. Before the internet.

Interrestingly, I grow only heirlooms and landraces, I start them indoors. We have power outages here on a regular basis and none, I repeat NONE of my plants have hermied as a result of lighting interruptions. I can only conclude that the gene gor that behavior is not there or not dominant enough to surface as a result of that stress.
It seems that some landraces do it normally as a self preservation thing? Ive never grown one though. However, breeding strains that are kinda randomly chosen may be introducing and spreading the hermie trait through a huge cross section of modern cultivated cannabis? This means that hermie, may pollute the entire gene pool if breeders dont start being more selective. I bred pure Lebanese plants last year and had no issues at all with hermie over 6 or 7 power outages. 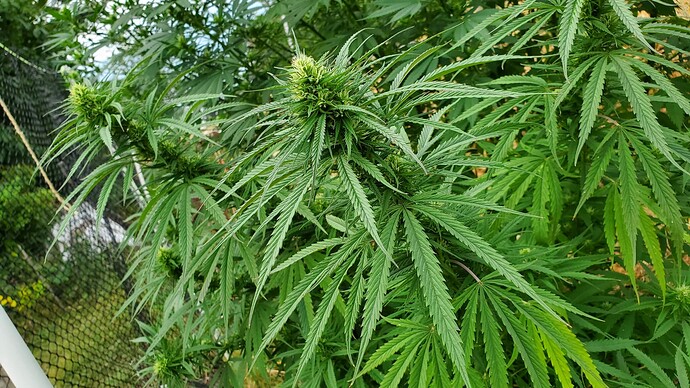 Wow, thankyou so much for that insight. I never really looked at it like that. Outdoors i always went by if its brighter than a full moon dont try it and i always preferred to grow under a canopy of trees

Yeah there is a lot of misconception about light. It behoves one to look at a light intensity chart or even watch a video of testing grow lights with a good quality light meter. It becomes plainly obvious that artificial lighting gets weak really fast with distance. Honestly, an led light on an appliance… pretty much guarantee does not have the capacity to flip a plant. And thats the thing, people think its the light… it aint… its the genetics.

The you tube light guru testing mfg against mfg is perfect setup. The floor is mylar, very instrumental in achieving great numbers, inflated numbers to me.

Still even playing field for both lights, just tested in conditions to achieve success.

In some cases thats what they do, Im talking sphere testing. Tests done in a sphere are pretty precise. All major lighting manufacturers get their data from sphere tests. Another test which more acurately simulates ehat we are actually talking about is the grid test. This is done in the middle of a room with a white grid on a table, a light probe is placed on each intersection of the grid and measurements are taken the light is lifted to various heights and the measurements are then graphed to show effective transmission. This is super important data because it shows professional growers the optimal plant height and density to the lights effective coverage.
With this data you can see how light tapers off in a doubling fashion with distance and wattage. The lower the wattage in the light ( not the fixture ) the faster the amplitude deminishes with distance.
This explains why the sun is so consistent… it has gigantic wattage and comparatively speaking it would take a massive distance to make a considerable degree of change.