Distance from leaf to light?

1st grow here, 2.3x2.3 tent, soil. but my question may be generic. Please pardon me if I clearly missed something in my limited research.
Here goes;
It seems that everyone that I have read on the forums is keeping their LED lights about 12-24 inches away at reduced “wattage” (Note #1). why not Max distance, in my case probably 60inches, and run the lights at a much higher power, thus (imho) illuminating the entire area. Keeping in mind that most tents are reflective so the plant would benifit from a more complete coverage.
(note #1: Personaly I would think more in “lumens” (??) and I do have a grasp on DLI)

Hello
keep close so seedlings do not stretch too much. Each light manufacturer should give you the best height. What light do u have? If you would fill out the support ticket below, it will help others to help you. 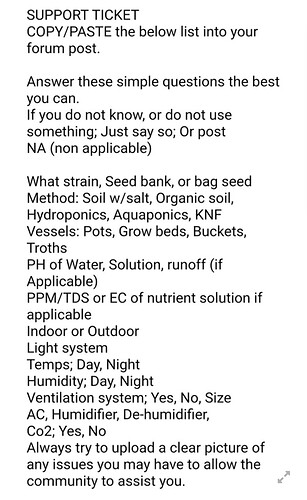 why not Max distance, in my case probably 60inches, and run the lights at a much higher power

A light huge 12" away from the leaves run at 50% power will deliver about 6.25 times the amount of light energy to the leaves as the same light hung at 60" running at 100% power… Inside a tent, there is reflection to factor in that will help close that gap a tiny bit, but not much as reflected light is traveling even further so it’s even more degraded, without a huge difference in initial light power you won’t overcome what can be delivered at much shorter distances…

Forget lumens and focus on ppfd.
You’re right that better coverage is ideal but it’s a balanceing act.
Each light “especially leds” is different, things like design shape or “layout of diodes” and power draw can effect ppfd.

It’s about finding that sweet spot to where you have a nice even spread of PAR. Most leds lights today will fall within that 12-24ins some exceptions though of course…

This is old and bad information.
Dosen’t not apply

This is old and bad information.
Dosen’t not apply

It’s not bad information, the losses are still there it’s a law you can’t beat physics… What you can do is include reflected light into the equation, as he clearly stated (like I did) reflections will help close the gap of lost energy in the law as the law doesn’t factor any reflections or any variables at all… The inverse square law is a pure law, it doesn’t include variables outside of distance and energy, things like air, airborne particles, focusing lenses, walls, floors, glass tubes, reflectors and a slew of other things can help recover some of the lost energy as I stated, but they will not overcome the lost energy… LEDs have internal cones and lenses, that reflect the light into a tighter pattern it’s how they are made, he also factored in a reflective wall, these two reflection gains (just like I said) helped close the gap, but he still lost a significant amount of light power just doubling the distance, in the OP example it was a 5x distance change, the loses won’t be linear, the light closer to the plants will win out on efficiency…

The law stands, it’s valid and does apply even if not as huge of a loss due to reflections and other variables… All he showed is that there are other factors like reflection and lenses that come into play he did not in the least show it does not apply, he actually showed it applied… His own calculated losses show it applied, but also showed it was not as great of a loss as the law calculates due to outside variables no included in the law itself… When you add those outside optimization variables (like reflection as I said and he did) you can regain some losses but not entirely overcome them, as proven by his own calculations the losses still exist and are very real…

Wth are the odds? I just mentioned the old inverse square law in another thread. I figured out hanging height using it and a ppfd chart when I was first starting out. My math was good, but the Vivosun ppfd chart was not. Thank God for Photone.

I understand the law very well it it absolutely dosen’t apply to led lights at all and them being in reflected walls makes a huge difference, not just a little . It destroys the gap…

I stand on what I said and physics suports my claim.

I understand what you think is happening and it looks good on paper.
But these variables you say make little difference, absolutely destroy inverse square law.
Reflective walls in combination with leds lights effectively functioning as a flat plane projecting lights "across a plane " and not a single spherical source admitting light evenly in all directions…

You don’t have to take my word for it.
There is literally thousands of data points from people making PAR videos.

But if you take the par numbers from the videos online and do some math like the guy in the video did. You will see that the loses are way, way lower makeing inverse square not an issue at all for led lights in a grow tent

LEDs have internal cones and lenses, that reflect the light into a tighter pattern it’s how they are made

This is not how modern led diodes work.

but he still lost a significant amount of light power just doubling the distance,

With that big of a difference, I stand on my statement.
Inverse square law is useless with led lights in a grow tent and it’s easy to prove with proper and complete considerations of ALL the physics involved.

I never claimed inverse square law wasn’t a thing.
Only that it is irrelevant under the conditions being discussed.

there is reflection to factor in that will help close that gap a tiny bit, but not much

The math says different.
Inverse square laws say 75% loss
Actually lose with reflective walls was less then 13%
And this is in a test area without a reflective roof so in an inclosed tent the loss would be even less as some energy is lost out the top of the test area

Photone is free and works a treat.

Go read About LED lights then download the free Photone app to your phone. Once you understand PPFD and DLI, which the Photone app will give you (for free), setting the lights is easy and most likely correct.

Thanks for the link.

I have limited knowledge in regards to your question but unless you’re on solar power why spend extra on your electric bill .
I personally like daily fussing with my lights . I use the time to really connect with my plants .
I have been growing flowers and vegetables for 55 years and swear close daily inspection has nipped numerous problems in the bud . I have only 7 years growing marijuana . Of those 7 years 2 have been indoors . The indoor grow has yielded much better results .
Gardening is always an adventure, have fun .
Happy New Year