Sad but gives ya a sneak of your long summer work

Did you cover the wound on the plant so no nasties get in her?

Oh turns out that was the least of my worries.

The MK ultra despite regular applications of pure crop1 continues to get mold like nobody’s business. The conditions are right for it but only just honestly I’m kind of surprised it’s molding as badly as it is and this time it’s not caterpillars.

On Saturday I was pruning dead leaves and examining flowers for rot and it was just an absolute mess. literally everything I put my hand on had some amount of rot on it it felt like and halfway through printing it out. I realized that I’m not gonna be left with much and what I am left with. It’s just going to continue to rot so I harvested the whole thing it’s early and the buds add time to swell still and I’m sure lots more resin to pack on, but it is what it is I wanted something rather than nothing.

Other news I hashed the top half harvest of the Cali Dream. Came out nice. Rosin later this week!

Thanks brother. So far I’ve got a plant and a half left to go out there.

Ugh the hits just keep on coming too. I made hash with the Cali Dream I got… I washed the buds real good in peroxide mix and then plain water when i harvested but when i was making hash It smelled a bit like Chrysanthemum extract (which I do have and have used on mites inside but not outside). I finished up the hash making and the resulting hash had a bit of an odor like it too. Then I pressed the hash (made some really nice rosin!) and it has a little lingering taste of Chrysanthemum extract too. I’m worried something got contaminated.

I really don’t think I’ve sprayed anything on these outdoor plants except BT and Pure Crop1 but i can’t account for why it has this odor and taste. It ain’t right.

OH right and this. My indoor scrog is a disaster. 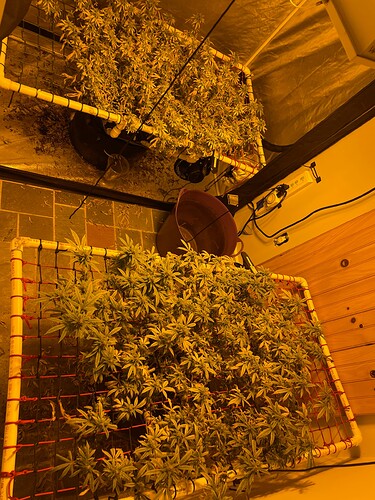 I’ve had to spray so much garbage on these plants they’re just fucking toast. The Pure Crop finally killed the mites but they did their damage and the flower are just tiny and looking like they’re nearly done even though its only been like 7 weeks of flower.

Sadly I’m thinkign I might cut my losses sooner rather than later and just start over.

Sorry to hear, I know the feeling and it sucks, but we keep on growing. I’ve pretty much lost all mine to Mildew this year. I have 3 maybe 4 that will make it to harvest out of 13.

Man that’s tough brother. I wish there was a real cure for this goddamn bud rot and as much as I’ve been pretty happy with Pure Crop it’s not a blanket cure.

probably better curb appeal than the other lol

Put them both on the front lawn and see which one gets the most attention. My $$ is on the cannabis!

Damn! I’m so sorry to hear things went south after everything was going so nicely. Hopefully you’ll still get some nice buds and luck will turn your way. I’m just waiting for rot issues to start here. It’s just a matter of time.

Mods - sorry in advance for what I’m about to say and feel free to edit me to an appropriate level of rage.

F$@K Me in the @$$h0 with a giant double ended d!ld0 Martha Fokker piece of fluxing schnitzel.

As my little girl would say “ I ANGRY”

I’m 100% certain that the chrysanthem extract in this don’t bug me spray from Fox Farms contaminated my most recent run of bubble hash. I’m not sure if it got in the bucket somehow and I didn’t wash it out or if it got on my bubble bags or whatever but my whole damn set up end to end just stinks like it now. I just tried washing my bags and buckets with hot soapy water and they still smell. The buckets are food grade so they washed clean and I actually think they are clean but they’re cheap and I don’t mind spending five dollars a bucket for new ones if I have to. It’s the bubble bags I’m kind of pissed about. I washed them in hot water, and I really scrub the hell out of them and they smell smell as bad as they did when I started if not worse so I’ve got to get new ones.

Really kind of blows extra because I’m totally out of Rozen so now I’ve got a wait for my new bags to show up.

Damn! I’m so sorry to hear things went south after everything was going so nicely. Hopefully you’ll still get some nice buds and luck will turn your way. I’m just waiting for rot issues to start here. It’s just a matter of time.

I feel that on the rot issues man. It’s almost inevitable. I keep trying strains to get something more mold resistant. It’s such a disappointment each year losing buds to rot. Makes me want to not grow outdoors.

Cant imagine how big that would have been in ground? Looks amazing!

Sorry about your troubles that totally blows.
As for the early finishers, Im growing Lebanese from seed I made last year. The plants arent large but the buds are really sweet smelling and apparently a joy to smoke. I messed up the curing process last year and had some mold in the bags, so I destroyed all of it. That wont happen this year lol.
They finish about now, which is perfect for our climate. 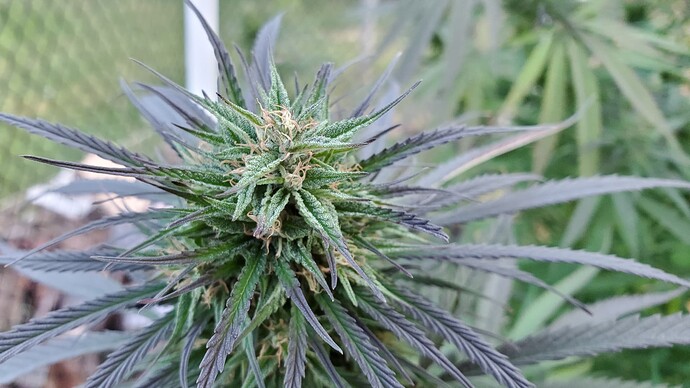 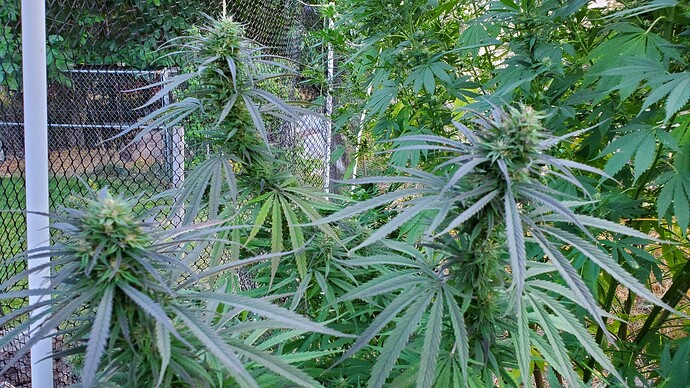 Well, it actually seems like my Callie dream is trying to finish. The remaining buds of swollen up quite a bit. It’s not a very frosty looking plant, but the last run of hash I did, the one that got contaminated, actually yielded pretty well, especially considering it was immature.

Thankfully the Tropicana cookies is making some moves. I feel like it’s been flowering for about four weeks now and for the last three weeks it’s barely done a fucking thing over the last three or four days it’s starting to pack on some girth. Mmmmmm 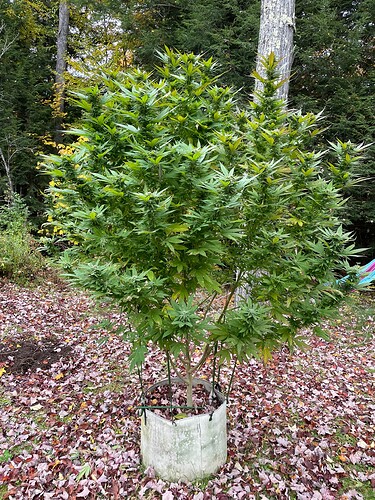 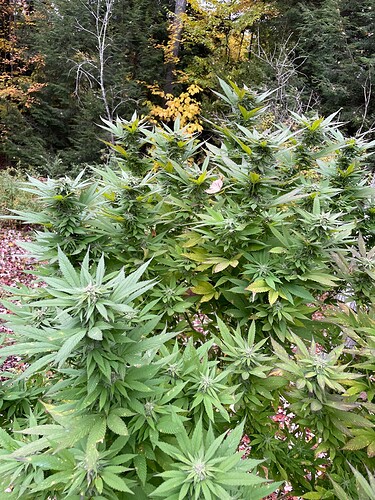 Looking good and finally stacking on some buds!

Hey, I’ve got some non-grow related stuff I got to talk about.

Here’s the short version in order to get a pilots license I need to pass a medical exam. The only thing that would prevent me from passing the exam is testing positive for THC. If I want to get my pilots license, I figure I need to stop smoking weed for like six weeks. Worth it?

The longer version of it is that I’ve taken a “discovery “flight and I really enjoyed it. My wife seems to think that we can afford to get me trained up and the ongoing maintenance of keeping my certificates current. And my father-in-law has a few bucks and has expressed interest in owning an airplane, especially if it meant his grandkids flying over to see him. My sister-in-law just got her private pilots license at least partially because, her old man has expressed interest in a plane and he has the means.

It seems like from what I’ve read the most difficult thing about airplanes and being a pilot is the finances of things. By all accounts. I seem to have that side of things covered.

Think that main thing I’m left with is that as much as it’s really exciting to fly an airplane it’s also fucking terrifying. I’m pretty OK with a well trained pilot sitting next to me to take the controls and have a little fun. Even the idea of going out solo or with my wife and family in the same plane. All sounds really awesome to me right up until something goes wrong. And I realize that’s basically what flight training is about, how to respond when something goes wrong so you don’t die. That’s kind of my issue though, the idea of having to deal with an emergency situation in the air on my own is fucking terrifying. I’m assuming that goes away with training to a degree but to be honest, even the idea of having to somehow live train for , the engine going out or some other horrible thing happening and actually having to experience these things is really scary. To the point where I’m kind of feeling like I don’t know if I want to spend 10,000 or whatever dollars and that smoking weed for six weeks to find out Whether I can handle it or not.

I’m really pretty sure that the answer to all of this is just suck it up, HTFU, just do it, be a man, and chances are I’ll absolutely love it and have no regrets . Or maybe not. Or maybe I’ll crash and burn trying to find out.

I would really welcome any comments or advice.

As long as your flying an airplane

you can land it like a glider if the engines go out in the air. The maintenance a big deal on airplanes and it’s expensive.

The tolerance break will be awesome once it’s over, it will feel good to take one.