Death of a Clone

Yesterday the husband called me to the garden to show me that our White Widow clone had died! This happened overnight. I told him I would ask in the forum if anyone had ever had such a thing happen to them.

The first photo is the deceased White Widow. The second is of two Harlequin clones next to it. The Harlequins are in good shape, so it isn’t lack of water. My only guess is voles. Does anyone have any ideas? 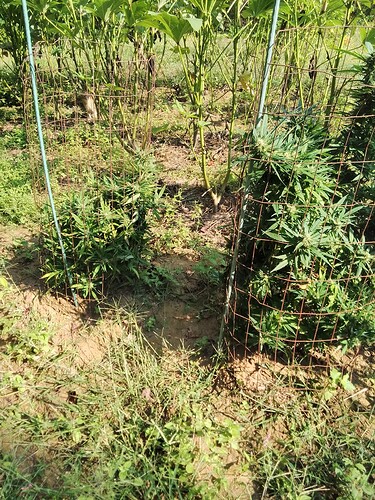 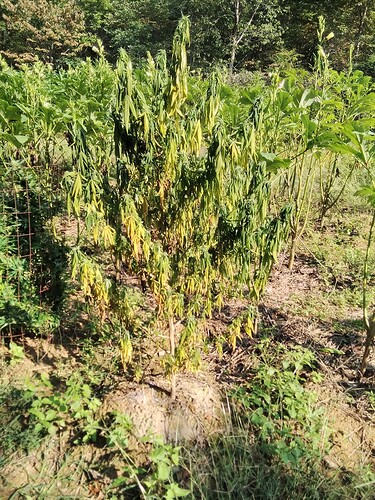 Ugh! The photos got reversed. The White Widow is the second one

I kill almost every clone I try to grow. Was it hot there?

Actually, it has been nice here. We had about 2" of rain this past weekend and it has been sunny since. Temps have been in the high 70’s and low 80’s during the day and high 50’s low 60’s at night.

I have found that some clones just fail to thrive.

I broke a brach off a Chocolope and stuck it in the pot. It is tiny but flowering.

I have a success rate of about 10%. Tried different methods. With seeds I have only lost two.

I’ll check that out in the morning

@Reed71, I looked at that stalk today and didn’t find a hole. I did find a deep groove, though that was soft as if rotton. The rest of the stem was hard and dry.

Very strange. But i also dont grow outdoor. But it seems to me a plant or clone of that size to die had to have an issue. If it was nothing the plant got fed. I would be looking at an under ground pest. Mole, ground hog, armadillo maybe.

We get voles. That was my first thought. That plant has been in the garden since May. Guess it took that long for the little monssters to find it

@rubyyarn , When a plant dies that quickly. I’m saying it was a root problem. Had some pepper plants do the same thing and when I pulled them roots where gone or rotting.

Ive never had anything eat my roots.I would think you would find dig marks or holes near by if it was a rodent doing this.