After a few days they managed to perk up! They were looking great. 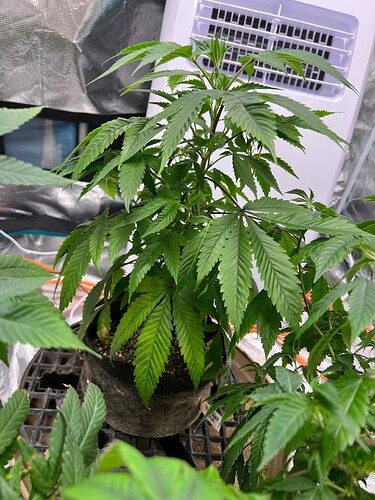 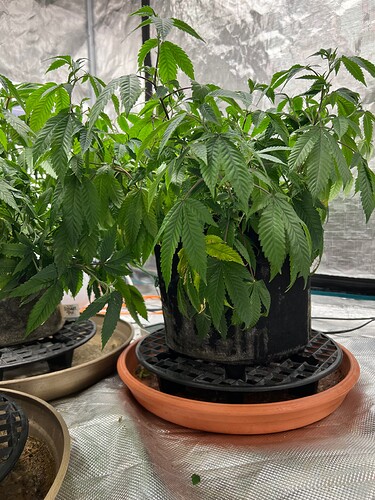 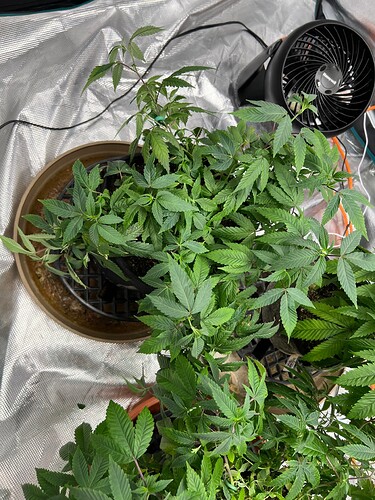 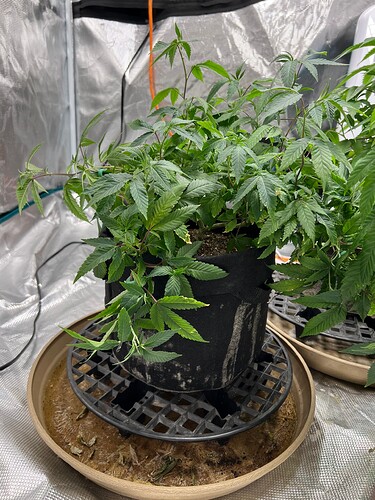 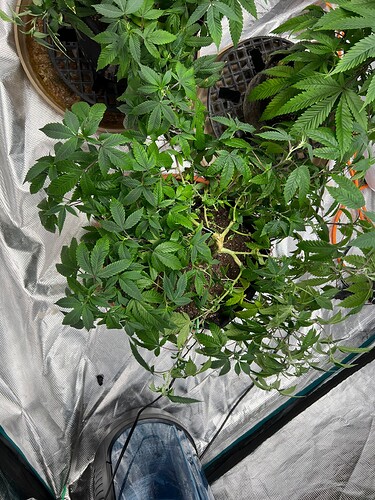 Gave them a nice watering and they perked up.
Now focusing on some training.
Gonna pop a few more seeds hopefully in the next week or so. We’ll see.

Thanks all who answered questions for me!

Hey guys sorry for the delay in between posts. I haven’t made much progress to be honest. Just have had them in veg for a long time.

I want to clone my baby yoda. And possibly my purple hippy.

Last night baby yoda broke a branch off, so I decided to go ahead and try and clone.

I skinned the stem that broke, it was about 7-8 inches long. 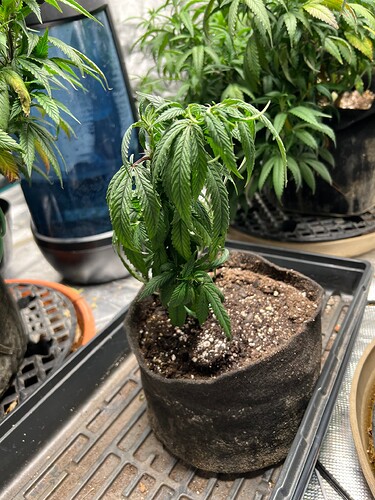 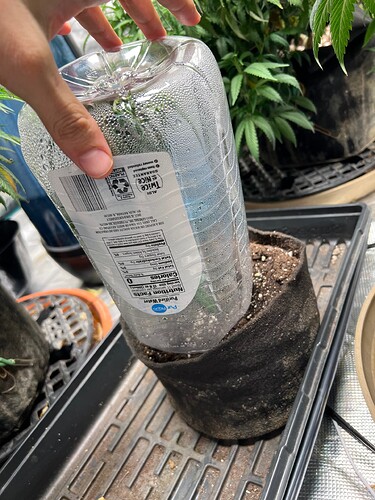 Proceeded to dip into clonex solution. Into root pod. 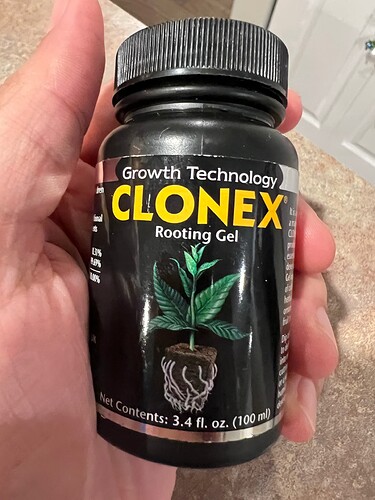 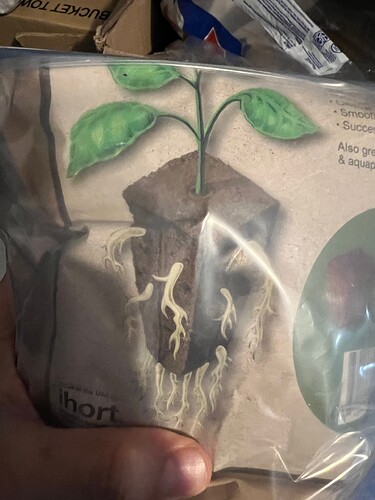 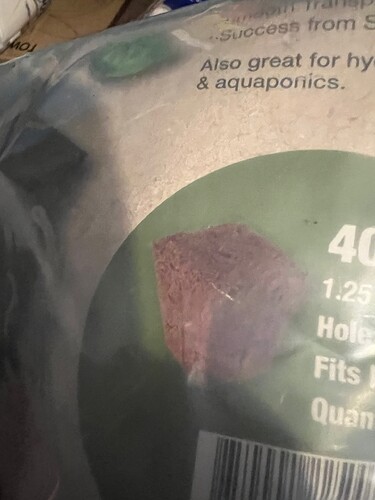 Measurements above are from top of each plants. Approximately. 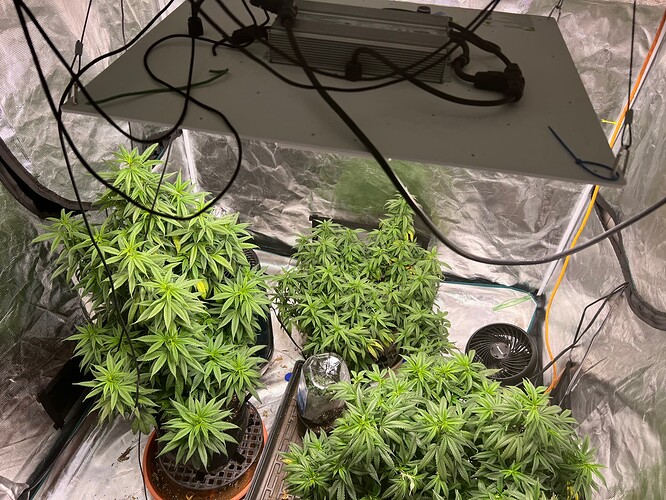 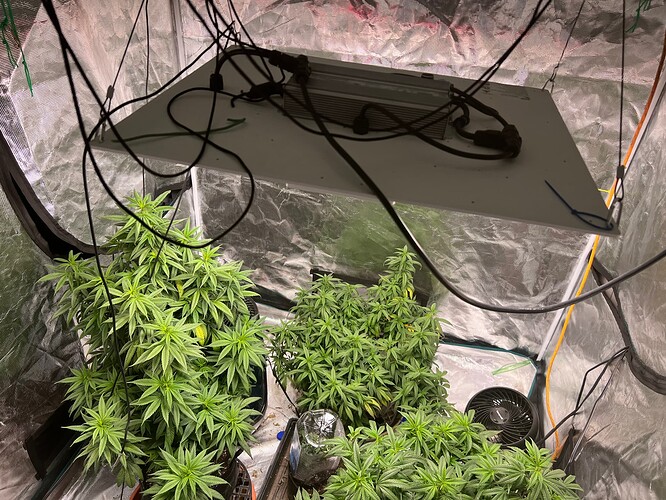 These are all in 3 gallon pots still. Except the new clone I’m attempting.
Bushdoctor coco and happy frog soil. Perlite/vermiculite.

distilled water only. Usually 2-3 gallons every 2-3 days. Every other watering or so plain distilled water. Same amount or just 1-2 if they look xtra thirsty. (Sad/droopy leaves) 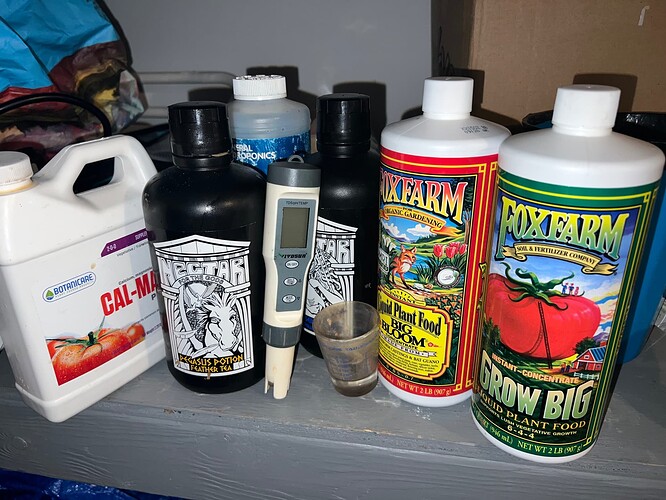 Besides that here are the girls. Looking niceS strong and healthy. I could flip
I think whenever. But idk. I wanna get at least 1 more in there same size before flipping. 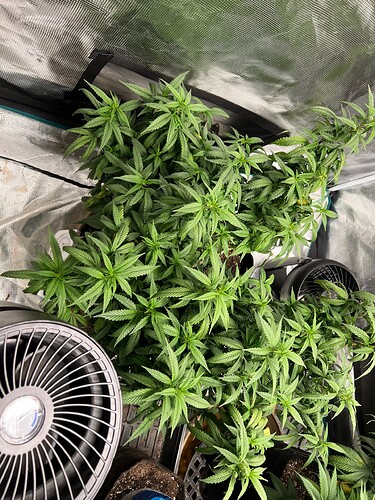 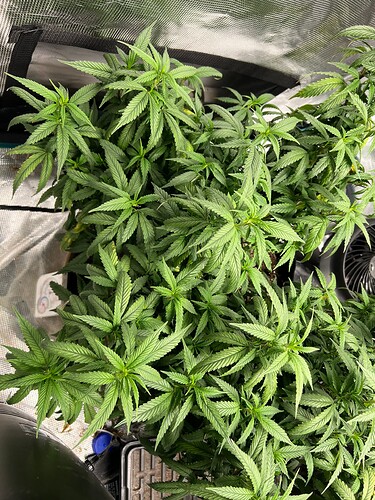 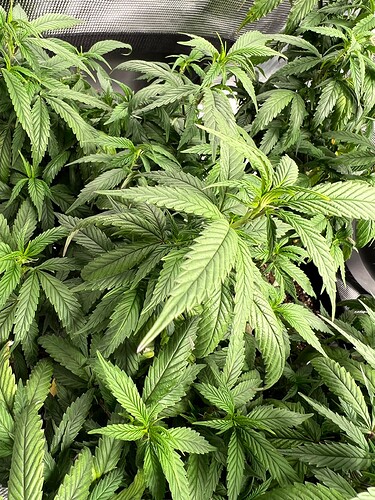 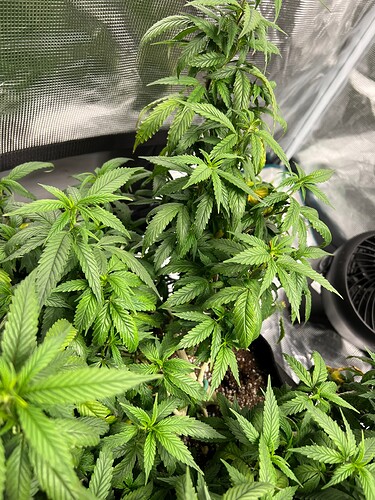 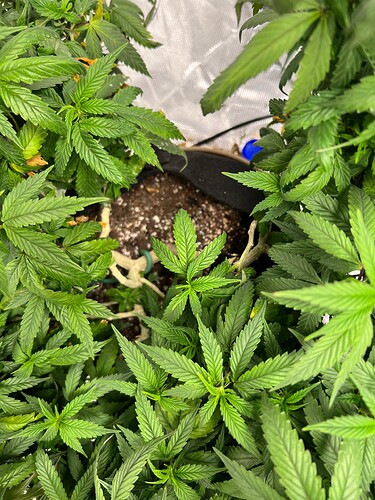 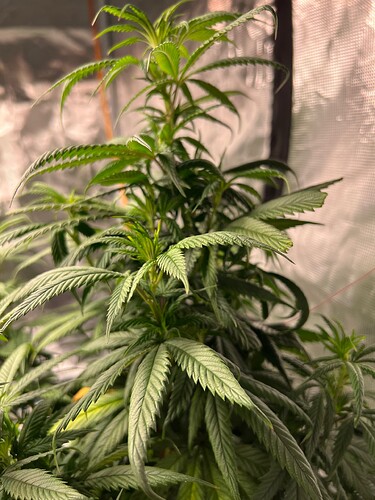 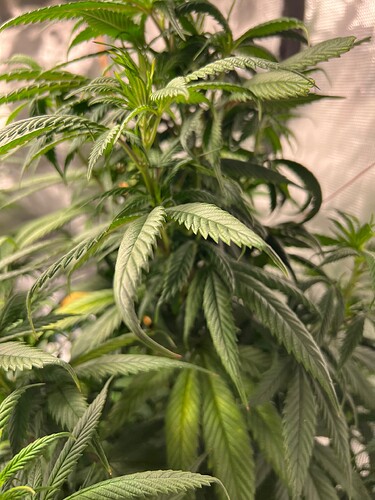 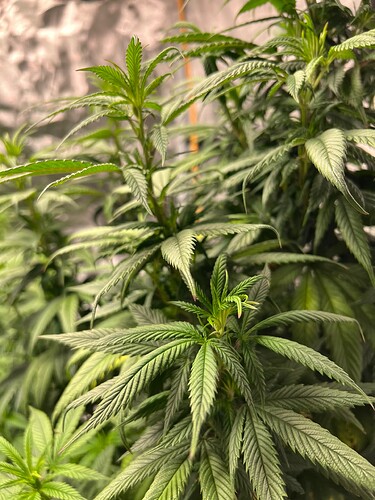 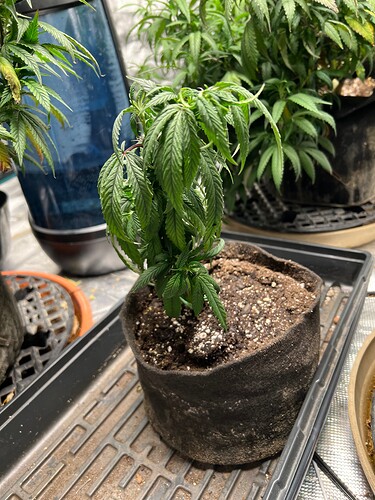 Okay guys, I’m stuck. So I want to keep baby yoda so I can grow it over and over. So
I’ve read about cloning.
Taking a clipping from mother plant and then making that mother?
This is where I get confused. Do I flower the original mother and then make this clipping a mother ? Or do I grow the clipping to as big as I want and then flower the clipping ? 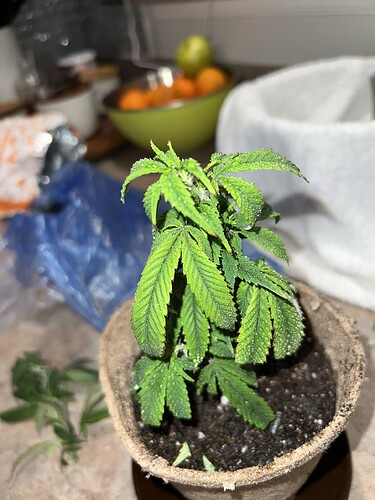 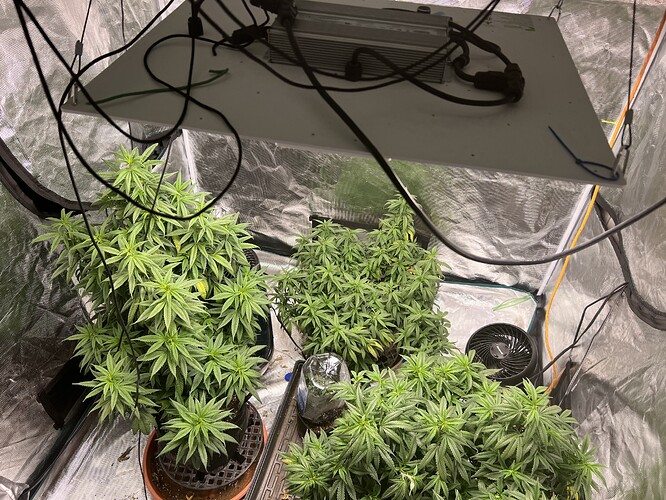 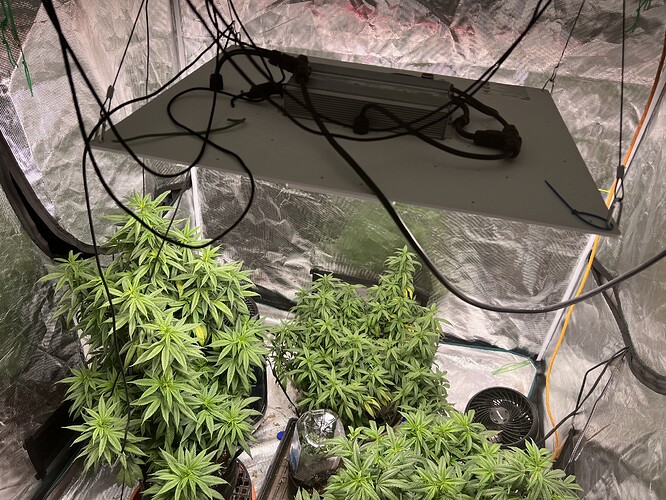 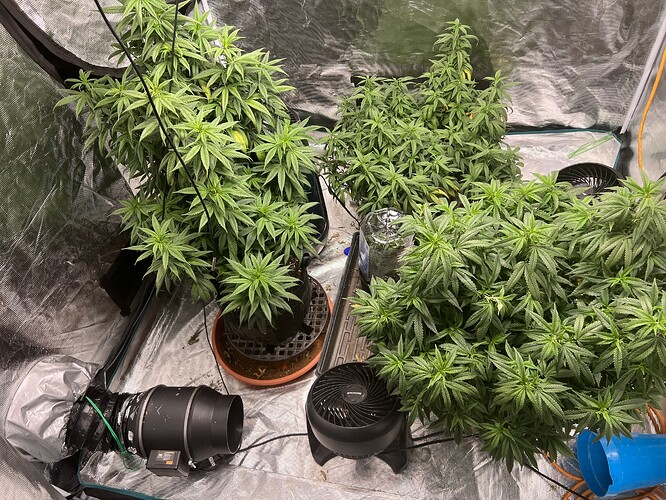 Keep the 1st one as the mother/donor in a veg stage with lighting at 18/6 and you can continue to take cuttings. Flower the cutting when it gets to a size that won’t overgrow your space. I take several cuttings at once and flower them at the same time and repeat. Yoda needs to grow some more before taking cuttings though if that’s it in the 1st pic

Do I flower the original mother and then make this clipping a mother ?

Technically you could do either. I think it there is a lot of context missing that most of us would use to determine how we would move forward. I think i would want to grow a plant out and see if it was worthy of being a mother plant before just designating it as one. So i would likely veg the plant you have out 5-6 weeks from popping, take a couple cuttings, and then send it to flower. Over the 8-9 weeks it should take to flower you should have at least one healthy plant capable of producing several clones ready. If the end result is not up to par you can traah the mother plant or just flower it out to get rid of it.

grow a plant out and see if it was worthy

Yes , Exactly
I have a blue dream thats in its second year. It was such a pleasant buzz we revegged the stump and have kept it going. I believe the mother plant is now a second generation clone itself. My wife is the mother plant caretaker so I dont always remember what we have in the clone cabinet.

This always my first thought. Back when i was more deeply involved I tried to keep a cut of everything. It didn’t always work out, but that’s a different story. Keeping mother plants requires extra resources and work, one should make sure a plant is a good candidate first.

I generally keep the cutting as the clone-mother but the actual from-seed plant has a better root structure (clones don’t have tap roots). The plant from seed is a better bet but often times I flower the original plant because I want to know sooner if it’s worth keeping, as noted

grow a plant out and see if it was worthy

Keeping mother plants requires extra resources and work, one should make sure a plant is a good candidate first.

I couldn’t have said it better myself.

Thank you! So the 1st picture in the peat pot is a clipping I took from baby yoda.

So I would leave the original plant alone let it veg for the time while I flower the clipping in a different tent?

So i would likely veg the plant you have out 5-6 weeks from popping, take a couple cuttings, and then send it to flower.

Veg the bigger baby yoda that I have in tent that has been vegging for a few months? Or the clipping I took from the big one? I took the clipping about 4 days ago.

The mother plant I have is unfortunately a clone also, so I don’t think the root structure would be applicable to this case.

You can keep the mother in veg if you have the space and flower the cuttings or you could flower both just seperate spaces due to their size and maturity. Most cloning is because the grower found a vibrant plant in veg and wanted to keep that strain going or they had 1 seed left of that strain

is why you keep the mother in veg to keep taking clones. My last clone run of White Widow I flowered the mother and the clones at the same time because I needed the space for another run after the mother finished up. I took a total of 9 cuttings and finished with 6 after culling 3 that didn’t make the cut. I flipped the clones around week 3 from transplant to keep them small and space limitations. 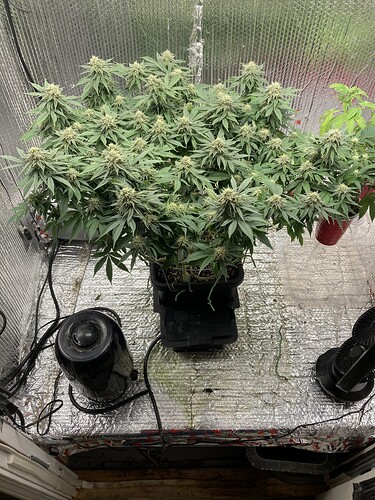 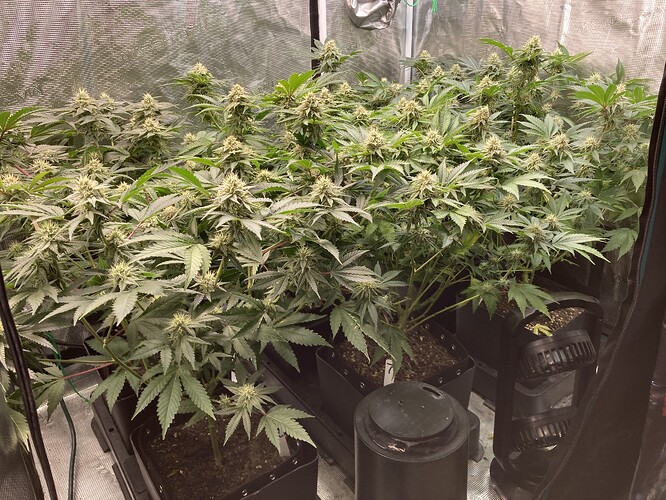 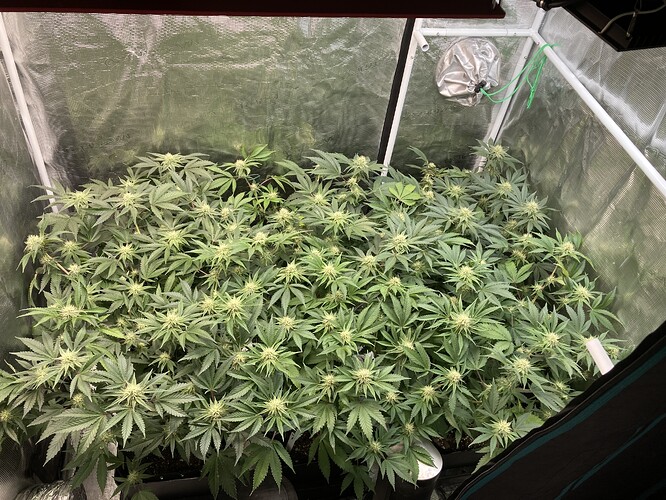 Veg the bigger baby yoda that I have in tent that has been vegging for a few months? Or the clipping I took from the big one?

Once i was sure the cutting has rooted I would flower the larger plant. As I stated before, just so I could see how it grows and what the end result is like.

You could keep big plant as mother and flower the cutting, but you won’t get much from it if you send straight to flower. And if you wait to veg out the clone and then flower it will be several months and resources wasted on 2 plants before you know if it’s any good. Why invest that kind of time or resources when you don’t have to?