Claw like leaves, turned up edges, cant tell what is wrong

Hello all and thanks in advance for any support!
This is my first ever grow, and i’m having a bit of trouble I’m hoping someone can help with.

So, I’m not sure what is going on, so I will just leave the pics here.

Today is day 20 since they all surfaced.

This is one of my healthiest plants, starting to do this claw shape too.
Havent had a single problem out of her till last night and today.

This too is one of my healthiest plants.

I had started them off and given them a very light dose of nutrients, befor noticing some issues, and stopped. This was about 2 weeks ago. I gave the two healthiest some more nutrients maybe 4-5 days ago and they seemed to love it, but havent given them any more since.

My temps were a bit of an issue at the beginning, (thought that was why the one was curling up)
But not anymore. They are staying anywher from 73-77, and RH of 50-60.

Any help is appreciated

You’ll get more/better responses with pictures taken in natural, white light. It’s really hard to see anything with the purple lighting.

Lets start with the basics. This is a support ticket which asks for basic grow information. Looks like you have a blue-red light. best to turn it off when taking pictures. Color rendering is bad and throws things off and detail is tough to make out
COPY/PASTE the below list into your forum post.

If growing Hydro some additional questions:

-DWC? RDWC? Autopots? Ebb and Flow? Other?
-Distance of liquid below net pot (DWC)
-Temperature of reservoir
-TDS of nutrient solution
-Amount of air to solution

Always try to upload a clear picture in white light of any issues you may have to allow the community to assist you.

Lets start with the basics. This is a support ticket which asks for basic grow information.

Hey they should actually make this a template when creating a ticket.

You’ll get more/better responses with pictures taken in natural, white light. It’s really hard to see anything with the purple lighting.

This one was overwatered in the beginning, but is making a good comeback

Hey they should actually make this a template when creating a ticket.

The 2021 Updated ILGM Suppot Ticket COPY/PASTE the below list into your forum post. Answer these simple questions the best you can. If you do not know, or do not use something; Just say so; Or post NA (non applicable) -What strain, Seed bank, or bag seed (photo or auto) -Age of plant -Method: Soil w/salt, Organic soil, Hydroponics, Aquaponics, KNF -Vessels: Type and capacity of container (fabric, plastic, etc) -PH and TDS of Water, Solution, runoff (if Applicable) -PPM/TDS or EC of nut…

I have it saved as a word doc

Hey @Dakjoe. I’ve recently been referencing a Vapor Pressure Deficit VPD chart for temp to humidity levels during stages of growth. I think you need to bring the humidity up to around 70% during the stage your in. Given the temps around ~75.

Agree with above you would want to raise your humidity a little bit but I don’t this would the reason for clawing, or why your leaves are doing what they are doing. Color looks good let me some some looking and will get back with u. I think the reason for clawing is normal an environmental issue but your numbers look good, so let me see what I can find

I hear you @Kingkupa and agree that VPD not the major issue. I just like to go down the list and check things off for a holistic approach. I’ve have leave wilt with my hydroponic systems when my air pumps fail, or in my case, the power cord gets unplugged and I don’t check for 48 hours. Checking everything except the air pump I had moved outside the tent to better regulate air temperature being pumped into my buckets. That was a lack of O2. Could be the case here or perhaps nutrient buildup. 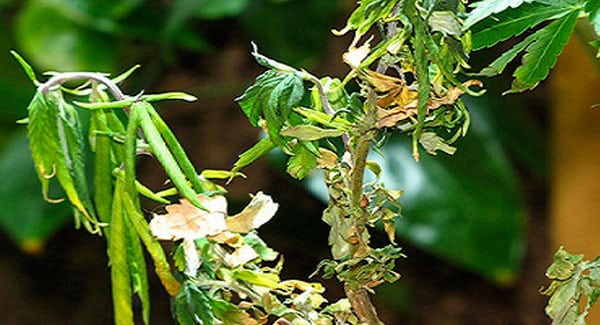 Verticillium wilt on marijuana is fairly similar to fusarium wilt, except that it is mostly like to appear in soils that are improperly drained or overly full of nutrients The first signs of verticillium wilt are drooping and yellowing foliage. The fungus will also cause the stem to turn a dark brown at the base, where it makes contact with the soil. These sorts of fungal diseases are nigh impossible to treat, so it’s of the utmost importance that you practice preventative care. 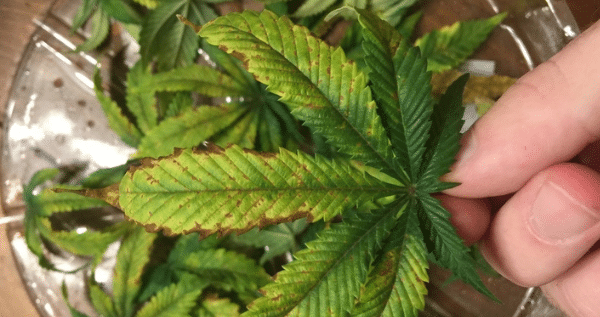 Ok did some looking around and 3 things pop up
1 environmental issue eaither to hot to cold but your temp numbers didn’t look bad to me? So maybe raising your humidity?
2. Over watering?
3 Root lock out, do you have any ppm readings of you run off? I know happy frog isn’t ocean forest so I don’t think feeding nutes this earlier should do that?
I’m sorry I can’t be more help, I will continue to look and see what I can find, I’ll call in some pro that can help, sorry best of luck @PurpNGold74

I think @PurpNGold74 said he doesn’t add water for the first 21 days after initial soak to start his seedlings. But let’s check with him on this.

Ok…
So, I can try not watering for a few days?

Also, I will try raising humidity too.

I have checked the ph of my runoff, but sadly, not the ppm…

The ph was low, like 5.8-6… but that was before I ever touched the nutes, straight distilled water.

After notes and proper ph’d water, it was up to like 6.1.

But I never checked ppm of runoff.

Question, if it IS overwatering, is there a way for me to check the ppm and ph without watering to runoff?

Maybe take some soil and distilled water, mis it and chec?

Thanks for the tags fellas. I had checked in here earlier and was waiting on the support ticket and work got to rolling on me

First glance, it resembles overwatering. Overwatering and underwatering look pretty similar to newer growers as they both get ‘wilty’. Only overwatering shows rigid strong stems and wilty leaves.
So my first question. How often are u watering? As u may or may not know, overwatering isnt really giving too much water as much as its the roots being too wet for too consistently long without oxygen.

The second picture kinda resembles the first except, the leaves are curling around and twisting up. Thats normally a telltale sign of pH imbalance. No idea why, but whenever my leaves did that, my microbe herd had failed (too dry for too long) or my pH was wayyy off mark.

In the OP (original post) the clawing upwards of leaves is typically environmentally based. Either the light is too close and too intense (very possible, even without a super efficient light) or its going thru a higher temp/lower humidity spell as mentiond above. VPD isnt just about days on temps, the swings of nighttime (cooler temps, higher humidity) to day could be the issue. Ur numbers look pretty good, just saying what normally causes the ‘reverse clawing’.

As for the culprit to the PH issue… it could have been the early nutrient solution… 100-250 ppms isnt alot by any means. Some people have tap water with more ppms. The issue could have been the pH was a tad lower then what u inspected, as ur runoff has been a good bit lower. 6.0 isnt optimal in soil and Id be working that upwards if possible. Distilled water isnt the best for adjusting soil’s pH as it is VERY low ppm and will just assume whatever pH it is being poured into. Get you some buckets of tap water (under 200 ppms if possible) and let it sit for 24 hours and evap the chlorine. Then pH it to around 6.8 (soils sweet spot is 6.3-6.8) then run it thru your medium.

Test after the first gallon, pH and ppms. And keep going until ur pH is more in range, but preferably ur soil’s nutrient havent been depleted.

Question, if it IS overwatering, is there a way for me to check the ppm and ph without watering to runoff?

Maybe take some soil and distilled water, mis it and chec?

This is called a slurry test. It works. Let it sit for 12-24 hours after mixing then test.

My only issue with slurrys is ur testing the very top. Roots grow downwards so its not really showing the area u need to be concerned with.

Sorry about the wall of text above. I like to be thorough and get into rants sometimes. Tag me if u need anything else or have more questions and happy growing

You can do a slurry test, I have no experience with doing that, but Google slurry test, or YouTube it I’m sure you can find it. If over watering then yeah didn’t know what to tell u, I know when they are young it’s hard to tell, I lift my pots up and if they fill light I water in if I let them go another day, and re check. But I physically pick them up, after a few times to Will be able to tell the difference between when they need water or not, hope this helps so how and best of luck

I feel so smart most have posted at same time, I know you know what you are talking about, so for more me to be even close I’m patty my self on my back lol thanks for all your help

No problem my guy! Always nice to get extra confirmation eh

Over nuted. You shouldn’t have added any nutes until past 30 days. I did the same thing 2 weeks ago to multiple plants and they’re barely recovering. Here’s one

Hey @Dakjoe. I have used a probe for checking soil ph/humidity/light probe for that.

I would try getting a little air to your girls down low to help dry out your soil.
Once they get dry start the water regime with some ph tested distilled or RO water. Check the ph in and the ph from runoff.