There my hairy kids… gotta spoil them…

That’s really interesting … i wish I’d this when my senior was suffering with neurological problems .

Just a friendly word of caution, spent vape is harmful to pets. My Pemi ate spent vape and had tremors/shaking as well as other symptoms of neurotoxicity, dilated eyes, staggering, wetting herself. She ate about a 1/4 cup of ABV. She slept it off, but we nearly rushed her to the ER until we realized what she had gotten into. Animal Poison Control told us she would sleep it off, which she eventually did.

i had a rat terrier eat a roach i left on the edge of an ashtray one day… when i got home i called her,and called her with no avail. i found her wound up in the sheets not hardly able to move,and really not wanting to…man i was really worried about her until i realized what she had done… anyway she is still raising cane and chasing any squirrel that will run…lol
she does not mess with daddys ash tray anymore…lol

@Hawkeye_diesel
@peachfuzz
@bob31
I have a 5 year old golden retriever with epilepsy and she has gran mal seizures. She’s on phenobarbital, brovet and thyroid medication that keeps her seizures in check usually for anywhere between 3-6 months but then she still will go thru a series of seizure episodes, which just so happens this past week she’s been seizing for 8 days now. My wife and I was just talking about how we have seen the videos of children having seizures and how just a few drops of CBD oil can stop their seizures and how we wondering if the same would work for our dog or even just giving her a edible or cookie would even work. Has anybody heard anything about dogs with seizures and cannabis? TIA

My lab had seizures but I’m not sure from what exactly. I started him off one small drop of tincture in the morning on a half dog bone and he hasn’t had a seizure in over a month. He is at 2 drops in the morning and I’ve seen marked improvement.

The tincture I’m using has some THC in it so we are gonna switch him over to the cbd tincture from treatibles.com I also order dog bones from them to try those.

I ordered them on Saturday and they shipped yesterday so I will have them this week see how they work.

I would certainly give my dog an edible if I was in your situation… at a small dose though , not that it will hurt them , but if you’ve ever been to high then you know it’s not very fun…
As to your situation , you might want to look into what @bob31 is talking about because it sounds more practical and would be easier to manage in some sort of pill form then just giving your animals edibles like I do…
My lab is 15 years old and has cancer and several other issues and since I started giving him edibles he’s back to his old self , eating real good and never in pain and happy and acting like a young puppy again… sometimes I have to slow him down and remind him how old he is so he don’t hurt himself…
Good luck @Wishbone I hope your able to get some help for your baby…

That’s awesome @peachfuzz I also have a sick kitty at home. She’s not going to be around much longer, but I know the drops will help with the pain.

But thank you everyone for comments they are truly appreciated

@hogmaster and she would do it again, has a taste for ABV!

mine had enough,she stayed out of dads stinky after that…lol

(Warning, I had to get fairly descriptive in my tjhird paragraph as I want everyone who ever reads this to know how serious my cat’s condition was. )

I wanted to update this topic on the progress I have seen with both my lab and our Maine Coon Cat.

My lab was having seizures. Sometimes as often as daily. I have been through this with several dogs in the past. This time instead of the vet, I ordered CBD Dog Bones and a bottle of 250mg CBD Drops especially for Dogs. The bones worked well but I went through $60 worth in a month so we switched to the drops so I can be more consistent. My dog has only had one seizure in the last 2 months and it only lasted 30 minutes or so and I gave him a higher dose of CBD oil and he came right out of it.

Now the cat. She has been with us for 15 years. Her mother a feral had her and her sister under the shed in my backyard. She has a tumor in her rectum area that was protruding out a half inch. It stunk like death and it was oozing blood and she wasn’t eating and couldn’t go to the bathroom. We thought for sure we were going to have to put her down. About a week after starting the 60mg CBD drops (One drop per pound) the swelled up tumor retracted and she began eating a lot of food and going to the bathroom somewhat normally. I have her on a special diet of ground chicken and turkey that I run thru the nutri bullet so it is the consistency of baby food as that makes it easier for her to eat. I put three drops on her food 4 times a day or so, everyday. She is now running up and down the stairs and acting more normal than she has in months!

Your mileage may very! But I am convince on the powers! These are zero THC strictly for animals/ pets. I get them from a company called treatibles online and I am sure as time goes on they will be available locally as well.

I’m told because they are made from Hemp and contain zero THC that they are legal in all 50 states.

If you have any questions, let me know!

Wow @bob31. Those are both great stories and I am so happy your babies are doing so much better. Your cats recovery is miraculous. Pets are such a big part of our families that we really want to do everything in our power to help them. I am going to check out that website as my 15 year old cat is staring to have issues with his back legs. Is the CBD a one size fits all formula and you adjust dosage or does the website give you guidance on the best product for different issues?

they have all types of things but the CBD oil at 90 mg is made for smaller animals like cats and is dosed at one drop per pound. My cat is tiny, weighs 4 lbs so she gets 4 drops every 4 hours. The lab get’s a half dropper twice a day or I give him a 1/4 dropper 4 times a day. Still trying to figure out what is better for him… @AnneBonny

and thanks. They are both special pets and just like any other part of the family, we all have our lumps and bumps and I want them to be comfortable and functioning too!

I just checked it out and am definitely going to place an order. Thanks for sharing.

Wow thanks for this. My old boy is 65 pounds, 16 year old hound mix with s lot of pain in his hips. His legs collapse sometimes, and he can’t get up, then we have to carry his 65 pounds into the house! He’s on tramadol, but it doesn’t help much. Definitely gonna look into this.

The boys, bud eating old guy in the right: 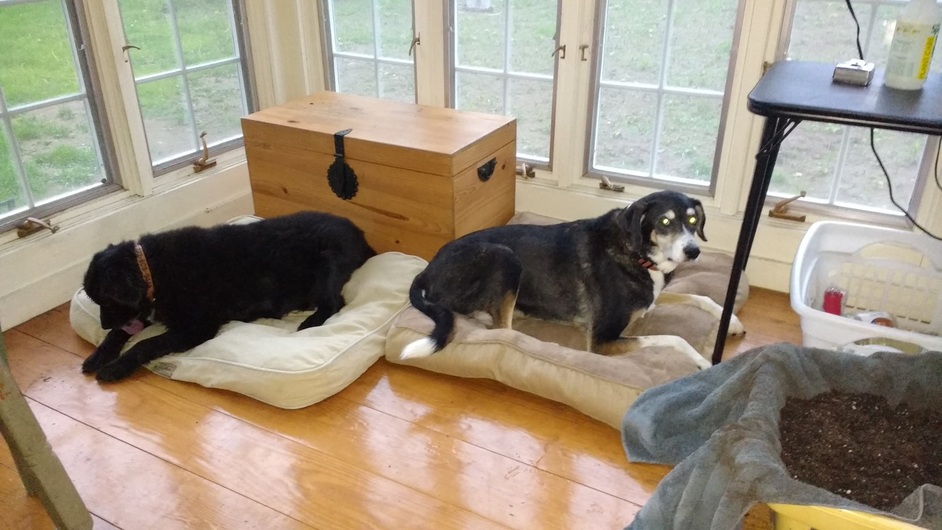