Just noticed a brown sugar leaf on one of my northern lights auto!
She is an outdoor grow in eastern Virginia currently in week 11 since sprouting. The browning looks similar to some other posts I have seen that was diagnosed as bud rot, but I wanted to check with the forum to see if yall agree. I can track this leaf all the way to the stem and it seems to be contained to just this leaf as of now. Also, when viewed through a jewelers loop there are plenty of clear trichomes on the leaf, would there be trichomes still on bud rot?!?

It looks like bud rot to me. Regardless, I’d cut it out at harvest. Brown means dead and I wouldn’t want ro ingest that.

More importantly, I’d cut it out now and spray with a mix of water and peroxide just in case. If it’s bud rot that you can see, it’s already mold spores in the air. Peroxide will help kill spores and stop it from spreading.

@Graysin @VirginiaGrowBoy Thanks for the input! With this being my first grow, I wanted some more experienced eyes on the issue before I cut anything out!

Be on the lookout for caterpillars or inchworms. Pick off by hand if found. Common outdoors. Use Captain Jacks Dead Bug (Spinosad).

@JBB @VirginiaGrowBoy @Graysin Yes I have noticed plenty of caterpillars! I always pick them off when I see them, and I spray the plants with Monterey B.T. Weekly (or more frequently if I notice them more often).

Is caterpillar bud rot different from moldy bud rot? And is it just as contagious??

Yes I have noticed plenty of caterpillars

These buggers will destroy your plant. Captain Jack’s alternating with Safer Caterpillar Killer every five days should target most pests on cannabis. Likely that spot of bud rot was caused by a caterpillar inside the flower.

Plan on doing a bud wash at harvest as well (in peroxide).

I was assuming the rot was from caterpillars! But I broke apart the bud and surrounding areas and did jot see any actual mold. Do you know if caterpillar bud rot is contagious like moldy bud rot??

if caterpillar bud rot is contagious like moldy bud rot

Usually that’s how it gets started: insect has spores on it that are carried inside the flower where it’s warm and humid enough to get a start.

@Myfriendis410 @Graysin
On this same plant I have noticed brown spots on some of the flower pods(not sure of their actual name, but whats circled in red!). Do you know if this is a form of bud rot as well? 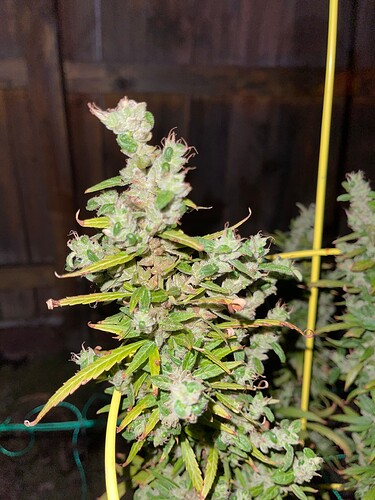 I don’t totally know but it doesn’t look good. @HappyHydroGrower @Newt @merlin44 any ideas on those brown patches, gents?

Can’t tell for sure. Is it dry and crispy, or is it mushy? Could just be pheno, but does look a bit suspicious.

As the others have said, it is difficult to be certain what is going on. It could be rot of some sort or a mid to late flower deficiency or even just the natural process as the plant completes its grow cycle.

I recently had a grow which was plagued with mold and bud rot. It was very different in appearance than what you have going on @NLG123. I have limited experience with mold and rot so have not seen all of the different ways it can manifest. I hope that you do better with it than I did. I lost two of four plants to bud rot and mold just this summer (I grow indoors). Many folks would have saved at least some of the moldy plants, but I chose to discard them in their entirety. Becoming ill from moldy cannabis is not in my plan.

Is it dry and crispy, or is it mushy?

They are all mushy just like the normal looking green ones.

Is this a form of bud rot? Troubleshooting

Noticed brown spots on some of the flower pods(not sure of their actual name, but whats circled in red!). Is this a form of bud rot?? This is an outdoor Northern Lights Auto currently in week 16 since sprouting! [image] [image] [image]

Same thing as you asked here.

Same thing as you asked here.

Yes same thing, sorry for the double post! I wasnt sure if anyone would see the post on this thread since its an older one, so I posted the new one! I now see starting a the new one was not needed…