I’ve read that some use humidity packs when curing and/or storing cannabis long term.

What are your experiences using these?

Is one better than the other?

They’re both the same inside. I have one in every jar of bud. Definitely worth having if you’re storing bud for longer periods.

I’ve bought Boveda and have got a lot of jars from dispensaries with Boost packs in them, both 62%. I reuse the boost packs for longer than the Boveda packs of the same size, so Boost seems to last a little longer. I can’t tell any difference in the job they do as far as re-hydrating or keeping buds moist…both seem to do fine. I’ll probably buy whichever is cheaper next time, but I’m leaning towards Boost.

I use the 62% also. I have jars of bud from last summers grow. They are as fresh as the day I jarred them. I actually think that the weed has gotten better!

I use the 62% for storage, and often felt the buds were just a teeeeeeny bit drier than I like. I’ve debated using the 68%.

Regardless. They do a fantastic job. I’ve got 18month old buds with boveda packs that still kick my asss.

Where can these be purchased, and how expensive are they? 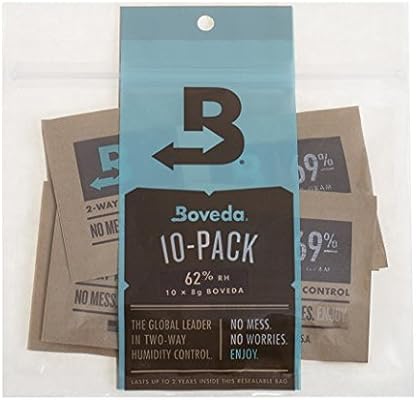 Thanks mate, bugger they say they this item does not ship to Australia

Try a cigar shop. They may have something similar.

Yeh, actually I tried to google it, and I found a supplier here in the land down under.

How many gram for a gallon jar?

That being said, I used boveda packs for about 6-8 months. I initially only put them in fully cured/stored buds, but after reading the boveda brochure I began adding them during cure.

Then I noticed all my bud had an “off” scent. Not quite musty, but not what it should’ve been. I had someone, that I respect, tell me my bud had lots of effect, but no flavor and little scent.

I thought it might’ve been the peroxide baths. So I did a harvest half washed half not, added the boveda packs, and it still smelled “off”.

Then I tried a harvest half boveda half no boveda. Boom, boveda jars didn’t smell right, and the other without them was perfect.

I weighed the packs and they were 9g-10g, with a mean of 9.6g. So I contacted Boveda. We had several back and forth emails. Eventually they suggested that I buy new packs because the ones I’d been using had taken on some off odors during the cure process, and were then passing it on to the next batch as I re used them.

These packs had never been rehydrated and were fully squishy.

Their website clearly states their product as useable during cure; so you don’t have to worry about burping.

I had the same experience…initially used them during the cure, but noticed the packs absorbed the smells.

Interesting to know, I’m getting them for storage only. From what I’ve found I’m thinking that a 67g packet will suffice for a pound of pot. I use gallon glass jars for storage and can store 8 - 10 oz of pot per jar. My intent is to put one 67g packet into each gallon jar. To be safe, I’m also putting a small rh humidity meter into each jar to verify how the Integra packet is performing.

I’m going to be getting some of the boost 62, I understand they dont have same issues of changing smell as some of the boveda do.