Biochar is the Foundation of a Living Soil

Biochar’s carbon matrix holds air, water and nutrients near the roots of the plant creating the conditions for a living soil. We inoculate our biochar with beneficial microbes to create the full spectrum of a living soil.

Living soils last and can thrive for thousands of years. We know this from studying the Terra Preta soils of the Amazon.

I grow organic in living soil. I use foop living nutrients. The biochar has conditioned my plants to absolute perfection.

I will definitely be looking into this, thank you!

Is there a mix ratio of biochar to soil or is the entire bucket biochar? I don’t know much lol but I like to learn new stuff. Ty

One five gallon bucket in 50 gallons of soil. 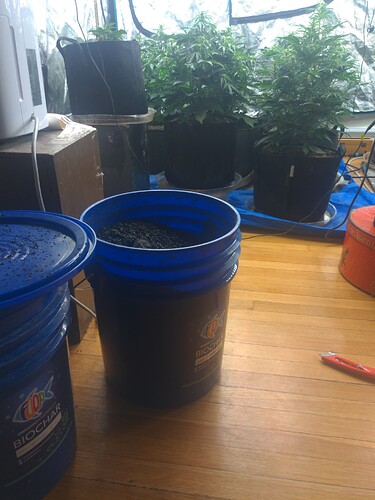 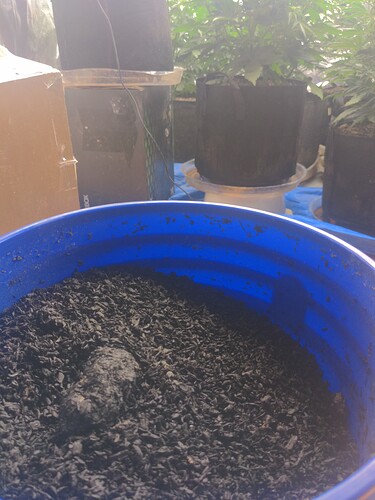 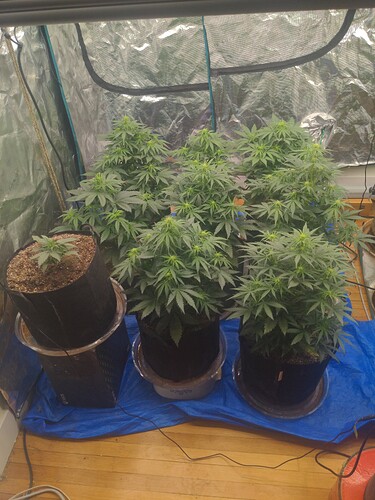 @Kozmoz And that was a side by side grow comparison your running? They are super green and healthy looking. I’ve been playing with the different Fox Farms soils recently, is that a soil it could be added to? Or just yard dirt would suffice? I compost and plan on recycling my previous FF soils-it’s so expensive to keep buying it all lol. I’m very interested in this. It’s from foop? Is that Googlable?

Bro! I’m so excited for ya… Just take a deep breathe and start with YouTube videos on biochar!!! Mind will be blow . The biochar has a half life of 1500 years! The Amazon rainforest was created artificially with biochar!

I started this grow journey on YouTube so it’s only fitting that I visit there from time to time lol. Ty

I appreciate your time and knowledge!! 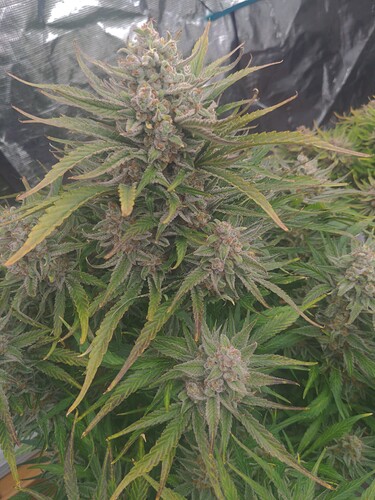 I love to sing

char char char from the hilltops to the valleys. But most people think I am crazy. Terra pretta was where I first read about it in the Amazon. By a fish collector in the 90s though, not a gardener. Ha.

Terra pretta, the original Mayan made biochar. It’s 1000-3000 years old and that soil is still to this day considered one of the best on earth. Mind you all the while sitting inside a rain soaked nutrient desert (aka Amazon basin). Every single atom of nutrients is recycled in that ecosystem. It’s the classic example of law of minimum. Anyway it will blow your mind.

Char is a complete waste of time if you don’t reuse your soil.

It is most effective in living soil. If you turn and burn the soil every run char is NOT for you practically or $$.

Char is great. It improves drainage like perlite, yet the pores (and microbes) in the char hold onto moisture. Most importantly it is a microbe sink. Like a battery. It keeps nutrients from running off by holding them in the soil. Microbes love it. It is like a swanky microbe hotel in the soil. They reside in the pore gaps close to all the nutrients. The char in your can filter is all you need if you dont have a place to burn or want to buy it. Commercial char is not the cheapest bag at the grow shop. Don’t chuck that filter carbon. It is some of the most porous char on earth. When your filter is spent all that activated charcoal makes a great biochar source. When I turn under freshly loaded up biochar, then check it in 2 weeks, the mycelium just entombs it. It’s hyphae just grow between the pores. It becomes a microbe transit hub for mycelium to catch the train. Or maybe a mycoboost hotel.

Where I am going is, long term, the char holds the nutrients: micros, macros, carbon (C0 & C02), amino & lipid chains. I find now days I worry less about weekly feed schedule routine. And more about generally loading up my char batteries in the winter. I would go into it, but that’s too long a tangent for your thread. But once things are growing I don’t adjust much unless the need arises. Sit back and watch things grow so to speak. My beds never gave me this luxury until I amended with the char. Pinch me type of difference.

I know my outdoor seasonal approach does not straight up work for an indoor set up. But I bet if one did a side by side with chared up reused super soil VS a scheduled feed no char sister clone grow off, you would roll with the char after.

Buying char depends on your point of view. It is so easy to make yourself in a wood stove or campfire. Burning wood on a hot summer day in an industrial zone for a few cups of char. Then shipping it to an amazon warehouse on a truck; then to your home. Pretty shitty way to make it. I make it with a high efficiency wood stove with pile of wood harvested within a few miles of my home. Rather than shipped. That not always practical but good if you can do it yourself. The char in your can filter is all you need if you dont have a place to burn. Campfires, pour water on the marshmallow coals. Don’t let it burn out to ash. You want the popcorn like squishy stuff. Not the harder brickets. Those hard ones will huegel down, but not real char.

Most important never put raw char on plants. You have to load it first. Otherwise it will load itself by robbing the garden of it nutrients. No joke. They’re a lot of ways, but I mix it with compost tumbler scoop, then float it in piss in a bucket. Forget about it for 2-3 weeks. Good to go. Best to add it for the soil mix. It’s not as good as a top dress. You want it homogenized like you would perlite. I would suggest 1/2 cup per gallon of media in a pot.

I have even read about towable retort ovens (pyrolysis, no oxygen present) that the syngas that is released from the wood can be captured, stored and used into tanks. Virtually zero emissions besides heat energy. The us forest service uses these regularly to char up pine beetle dead forests. The studies in Yellowstone show more moisture in the soil, more nutrients, more plant and animal species diversity after application of char. Rather than it becoming co2 and methane as it rots (thank you microbes).

Chemical fertilizers on crop land can be reduced. Think (trucks, sprayers, planes,) how much less co2 that would make from a renewable resource? With char batteries mixed in.

I even read here in Washington state they use it around holding lots and slaughter yards for cattle. To prevent nutrient runoff and waterway eutrophication. Char is piled up to make a nutrient sink. Then spread it on the crops when it’s loaded up. Brilliant. I also read they are mixing it into the feed to prevent methane farts from cattle at the source. No shit.

Now burning down the redwoods to make char for the pot growers is not good. But charing up scrap grass and down or dead trees just makes sense. Sorry if I got passionate about this one.

My dog’s name is char char 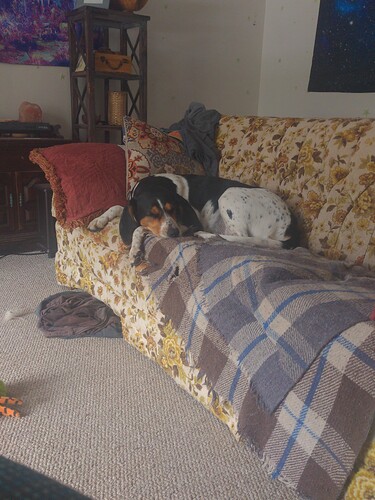 What type of hound is char char?

Love it.
This is my Willow hound. 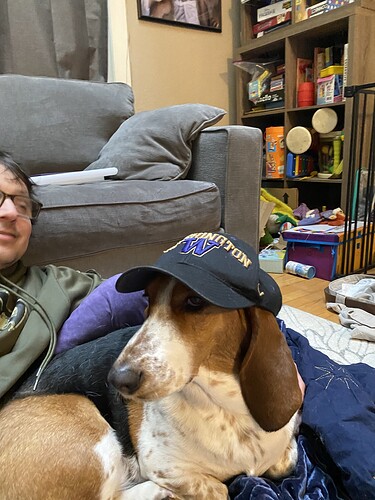 Both are pretty dogs. I have Puggles. 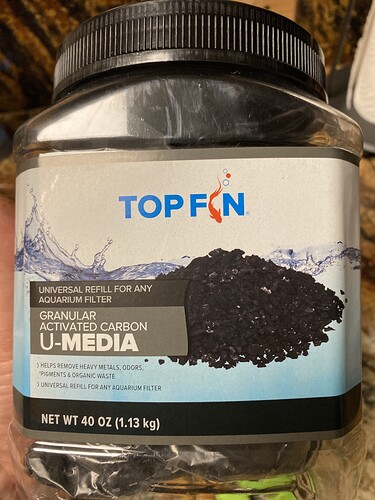 image1512×2016 911 KB
Any thoughts on how I might be able to use this as a soil conditioner? I hate throwing it out when I clean out the filter, I figure it’s loaded with goodies after having the tank pulled through it for so many months. I e started using my tanks sediment in place of the fish sh!t brand. 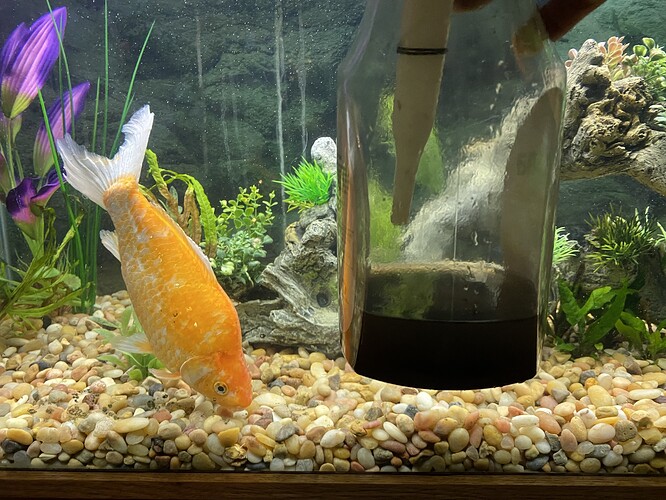 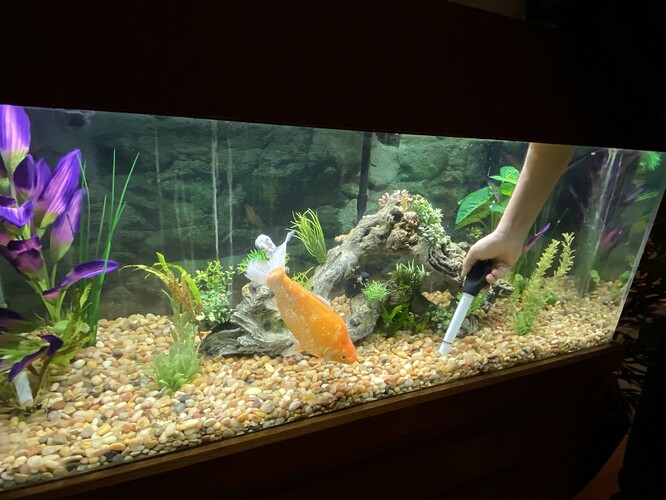 It is loaded with plant available nitrates, tannic and humic acids, and Protozoa. Made for a plant + char to act as a battery. Plug it in.

I have seen your lovely landscape. If you compost just throw it into the pile and it will eventually make the plants. Or you can chicken scratch in about a half cup per plant around the base. It’s fully charged by the fish and good to go.

Use a siphon instead of the turkey baster. Take about 4 gallons of the sediment into a 5 gallon bucket. Pinch off the siphon so you are only sucking while it’s in the gravel. If you have any foam or filter floss in the filter besides the carbon, give it a good shake and squeeze. Squeeze it out in the bucket at end of siphoning before you pour it onto the plants. Your plants will thank you.

I will have to admit I wasn’t sure I knew what a puggle was. I had to look it up. Nice looking combo. Is yours more pug or beagle?

I enjoy reading your posts, always so informative and in depth. I’m going to check into some bio-char as I compost and recycle my soils as well. I like being able to reuse not only my media and equipment, but everything the plant offers me, it all gets composted! I just have a heap that’s covered most of the time. Mixing and turning frequently. Excellent for the outdoor plants.