There some bad mo fo’s for sure. I been keeping them at bay with D.E. and spraying fresh garlic,all kinds of peppers ( hibnera,cayyean) and cinnamon. (Its funny real funny after spraying them little guys going crazy) then after the spray I fogged them with diatomaceous earth. And I want see them for a while and since I flip to flower. Them blasters are back but very little.
Am thinking about heating up the room to 110F for a hour and letting the temp drop to 65F to kill them. A buddy told me that will work but am scared that will shock my plants. There under a scrog or I would take them out side and do what was working but they are way bigger and be harder to do.
What is the best thing to do?
Thanks for any info and I would highly appreciate it.

There 2 weeks in flower

How To Prevent, Target And Control Russet Mites

• Quarantine plants for several weeks before introducing them to the nursery. Sometimes mites can lay dormant for a bit or colonies can be so small they go unnoticed.

• Never take clones from plants that have been infected even if they have been treated and seem fine. This can serve to minimize the spread of these very tiny and hard-to-control mites.

• Have predatory mites present. Amblyseius swirskii and Amblyseius cucumeris are two predators that will prevent high populations of russet mites.

• Maintaining a tidy garden and observing clean gardening habits won’t protect you from this particular pest as it is mostly introduced. There are large concerns over the future of this now international traveler and commercial hemp crops worldwide. 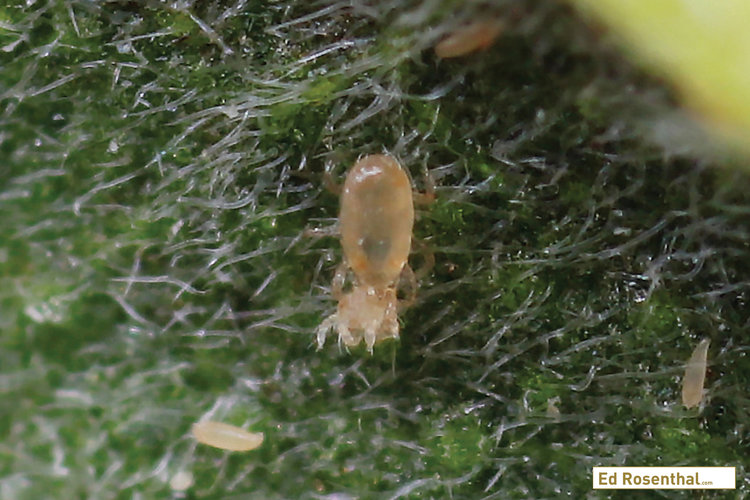 To treat Spider Mites and Russet Mites, apply Galendromus Occidentalis during the vegetative bloom stage. This Western Predatory mite can withstand hot arid summers and can be applied with crop dusters and drones for precise application.

The russet mite works its way up plants from the bottom. So remove damaged leaves. Quarantine and treat the infected plant.

The damage mites can cause in a hot grow room can easily be so substantial during the first three weeks of flowering that starting over in a clean room with new plants maybe an economically better option. Russet mites have been reported to be particularly resistant to neem and other horticultural oils so this throw-’em-out and start over mentality may prove doubly in order instead of a pitched chemical battle.

In hemp fields the introduction of predatory mites can prove effective. Using biological control measures outdoors can have its issues, but if it’s timed right and multiple applications of predatory mites are used in intervals of four to seven days, the damage can be minimized enough to have a successful yield. Russet mites remove cell content from the leaves with piercing, sucking mouth parts.

Thanks for the info.
What will happen if I leave the temputure at 110f for a hour and let it get to 60f real fast

I read were my buddy might be right.
They can’t live with temp fluctuations that are big and don’t do good in 100f or hotter

@KinSEDC just battled russet mites and might be able to add something.

oh hate to hear this. first, you sure they are russet? i see you’re at week 2 so probably no buds yet to hurt? alcohol. and nukem and then green cleaner can be used in flower. fyi they feed on trichomes and will be almost impossible to get rid of in full bud mode.

here’s just about everything i know on these little bastards:

Hi friends, posting this after I contracted russet mites and spent months chasing my tail trying to figure what was wrong and treat an unknown problem. this had folks stumped for weeks, so i just wanna put a photos of the progression out there for all to see. won’t be hard to spot once you know what it looks like. looking back, i could have spotted this DAY ONE and prevented all of this. first sign could be leaves tacoing or wrinkling up. some look just like regular heat or light stress with j…

i wish i could answer your question about the heat and maybe it’d stress them out but the alternative is pretty bad too. i also don’t know if 110 is hot enough. they could shield themselves further inside the plant.

i bagged up all my plants and heated my tents to 120 for 20 minutes twice. wiped down with alcohol. letting them sit for 2-3 weeks. this may not help you now but maybe after this grow when you need to reset.

Thanks for the info,
Yes there for sure russet mites.
I give them some alcohol I haven’t tried that yet
They are showing small buds just came in 2 days ago

Thank you for your help

don’t think you want to use the alcohol too long. if you’re committed to fighting it switch to something safe for flower.

do you have pics of the damage? i’m always interested in adding to the collective info here. and keep us posted?

No. I been dealing with it for a while. I put a huge dent in them. Once I seen them there was like 10 to 20 per leaf. Since then I have pruned them twice been fogging them with diatomaceous earth. But it has made my plants look lime green I would leave it on them for 4 days and just blow off the tops so the leafs could get some lite. I went two weeks trying to find them and couldn’t so I flipped them to flower. Ever day I look for them well 3 days ago I found some. It’s not that bad. Around the buds I only see like 5 to 8 and some buds I can’t find any so there numbers are down a lot a whole lot. I just hope I can save them to get something out of

can’t quite make anything out but i hope you’ll keep us updated so we can see a success story. try a few things on that list i posted that are safe in flower. everyone told me you need to use a few things because they’ve become resistant to a lot of chemicals. i wish you luck!

Can you seal off your space to be more or less airtight? Then introduce a couple of pounds of dry ice and let it exchange all of the air, suffocating the mites. Or you can use a garbage bag and dry ice.

I haven’t done this but believe it would be safe and effective and not too hard to accomplish.

Dry ice that sounds like a good idea.
I am going to try Everthing then after that am going to slam the book shut on them basters.
I made a cocktail of fresh garlic, all kinds of peppers, cinoman and acholol, that crap made me throw up even with out breathing it. I will keep up dates. In two days I will spray again and do the dry ice thing also

Please report on your results. It’s not like I’m sitting here wishing for mite infestation so I can test it lol.

Yea I switch it up. I should get them if I stay on it.
That what happen last time I didn’t stay on it.
They were real bad and now it’s just little here and there on each plant so I hope I can kill them before my buds get bigger.

I will. Thanks for all of the help

Would Tea Tree Oil work? We used it in a organic solution to help disinfect in South Africa. There was other stuff but I don’t think the whole recipe would be good to use.

I been mixing diferent stuff. This go around I have fresh rosemary from my garden. And all kinds of real hot ppeppers. Garlic.
Since am in early flower. ( I flip lights 11/13 on December 1 showed preflower three days later so around little over 2 weeks in flower I say maybe less) I put Captain jacks and sulfur on them by fogging them 3 days ago so today am going to blow that stuff off and wash real good with the stuff I said at the first of this text. Rosemary,all kinds of peppers, garlic.
I also did some major pruining.