So, I’m in need of some new carbon filters.

I try to avoid buying from Hawthorne. But sometimes it’s unavoidable. So I’m looking for input.

What filter do you think is the best performing filter? best value?

I actually have their 6 inch in a 3x3 now and it’s failing! It’s been in use for only 13 months. I’m going to try to get another one out of them but I’m not expecting better performance.

I did just buy an 8in filter of theirs as well. I will admit that the price point is great. But again, I’m only expecting a year of service out of it. I bought it out of the need to have it tomorrow (thanks Amazon)

Have you used any other brands?

I used vivosun but it was garbage.
Make sure you wash thoroughly the cloth filter,unfortunately depending on your humidifier and what type of water you use sometimes clogs them up fast.

I’m pushing air through it, as it’s for a 6ft tent. I wish they made a interior pre filters

So you don’t filter the air in the tent? Why not? How are you pushing the air through the filter? Is there a screen before the carbon filter?

I have my filter sitting outside of my tent with my fan sitting directly on top of it. Then just some ducting from the fan to the top of my tent. I’m in a pretty open space so I don’t worry about recirculating air.

No screen before the fan or filter.

Then dust may be clogging up your filter.

I’ve used the vivosun didnt last long. Bought the 6 inch AC infinity and have used it for 2 grows so far and it is perfect.

I have my filter sitting outside of my tent with my fan sitting directly on top of it.

This is why it’s failing. Although 13 months isn’t ridiculously short either.

Lots of people like to do this to give them more headroom. Unfortunately it creates 2 issues. One, like Oldmarine said. The other, is the surface area on inside of filter is a lot smaller than outside, and gets saturatedfaster. No matter which filter you buy, running like this will fail earlier than running inside tent and pulling through outside of filter. If you’re going to continue running like this I would probably stick with middle of the line filter like ac infinity.

Mountain air is probably the best. Phresh makes really good filter at somewhat lower price. I commend you for not wanting to pump money into the mothership!

@dbrn32 I’m aware of all these issues. I even messaged a filter company to see if they made a pre filter for the interior. They were dumbfounded when I asked. Lol.

I was just trying to see what else was out there…. And it looks like Phresh Filter sold out to Hawthorne too. Their web site is basically dead and now says “Hawthorne” at the bottom. I avoid them when I can.

This is like way less than first generation quantum board. Depending on how much this matters will pretty much answer your question. I believe they are a good company, and probably still have the best hps bulbs. But I have to admit it’s kinda funny to see them in led game. 5 years ago and probably even more recently everything they did was focused on bashing leds. I don’t have short term memory for stuff like this. But that doesn’t mean it wouldn’t grow some nice weed.

@dbrn32 They even came out with a new “ceramic HPS” around the same time as the LED. I found that interesting

The far red part of the lamp, will this make the plants stretch more? I thought this spectrum was only used at the last 15min of the 12hr flowering time. I like the UVA as well. I mean, if I were to go with the HLG, I’m sure I’d get the $150 UV bar too

We’ll see what the HLG sale looks like next week and I’ll make a decision then.

Far red light could be used as initiator like mentioned. It could be used for Emerson effect too. I can’t say that either is bs or a gimmick, but in terms of what you want out of a light, it’s not going to make or break your grows. Your main concerns with light should be getting the photons to your canopy and light energy at the points of highest relative quantum efficiency.

I have to get up for work in 4 hours, but we can chat more on this later if you want.

I have a 6" Can Fan Can-Lite Carbon Filter. After a couple of grows I moved it outside the tent. It isn’t the prettiest set up but floor space is a premium. Both the Can-Fan and filter have been in service for over two years with maybe a couple weeks down time.

I use 2 prefilters. One is on the exhaust duct. It is a piece of an old prefilter

The other is inside the Can. I took the filter that would normally wrap the outside of the filter, rolled it up, and stuck it inside the filter. I have had it this way for over a year (3x3 gorilla tent). I run the filter 24/7 start to finish. I could probably extend its life by not running it during veg. When the current grow finishes up in six weeks or so I will replace both filters.

I needed a smaller (shorter) filter for my new space and went with TerraBloom’s 6x16" filter. It was only $80 but it has not been used during flower yet so the verdict is pending on its performance and longevity. Its charcoal bed is thinner than the Can-Lite’s. It is connected to an AC Infinity fan. I like the fan a lot,
They are in a 32 x 76" closet I built for three plant scrogged grows

I wish I had more experience with filters but I’ve only been growing a little over a year. The first filter I had used was a Vivosun 6" that worked great for a little more than a year. Never had any smell from the Vivosun until the very end. I rearranged my grow tent to move everything that created heat to the outside and installed a new filter which was the A/C Inifinity. I have the T6 fan and really like it so figured their filters should be high quality also. On my last grow I could smell the plants through the filtered air in preflower so needless to say I was not impressed. I contacted A/C Infinity about it and they sent me a replacement but now I’m not sure I want to try another time with that filter. I bought one of these based on my previous experience and the amount of positive reviews it received; 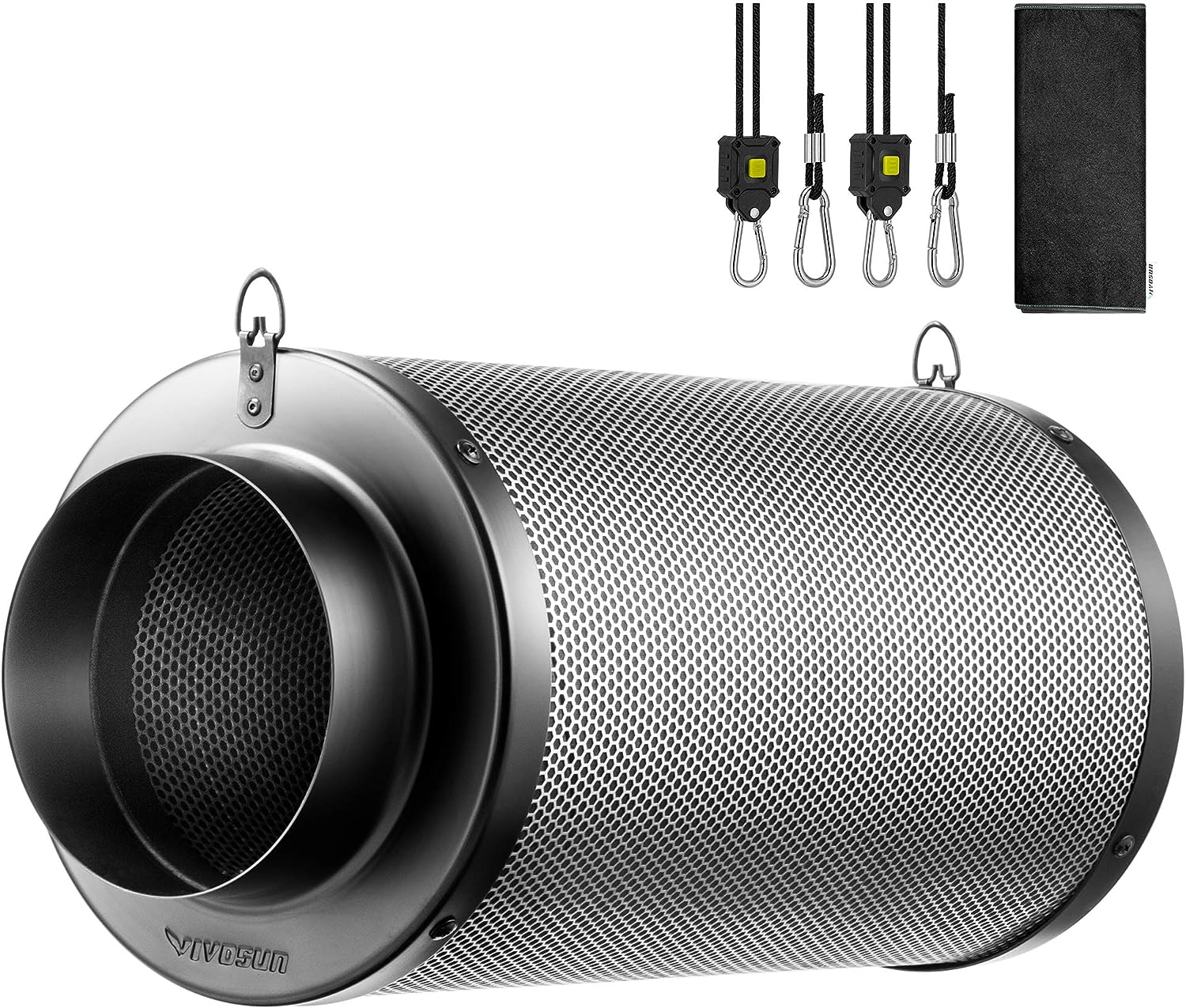 I know there are better filters on the market but spending $150-200 on a disposable item seems a bit excessive for me. Granted I might get a longer life cycle from a more costly filter but how long would that life cycle be? I agree with @dbrn32 that running the filter that way could definitely be an issue even though they state that you can set it up that way. If you’re pushing air through it that air is now not prefiltered like it would be pulling air through the filter sock potentially causing larger particles to clog the carbon. My outer sock gets covered in dust by the end of a grow and it’s even worse if I’m running a humidifier. Gonna run the Vivosun this next cycle and I’ll report back.