Started 5 Girl Scout Cookie Extreme Autoflower 16-1/2 weeks ago. Four of my ladies finished by week 14. All dried and in jars (~2-1/2 0z), but the fifth lagged behind in each stage of growth and started flowering two and a half weeks after the the other 4. The mystery girl
has been in flower for 4+ weeks now and is still slowly changing to cloudy tric’s (~30% still clear). Hardly any amber ones yet. I switched to flowering nutes 2 weeks later than the other 4.
I don’t believe my 5th is a GSCE seed. Autoflower for sure, but who knows what she is. The largest single cola I have seen on any of my prior auto grows. I’m going to keep going with the Big Girl, but can anyone clue me in on what’s going on?
I’ve already started my next grow of 4 GSCE and a White Widow, that you can see in the “group” photo. Does anyone have recommendations beyond staying the course and keep waiting for some amber after the balance are cloudy? Thank you 3000 in advance. 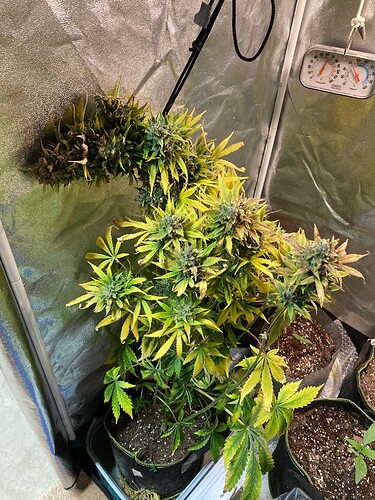 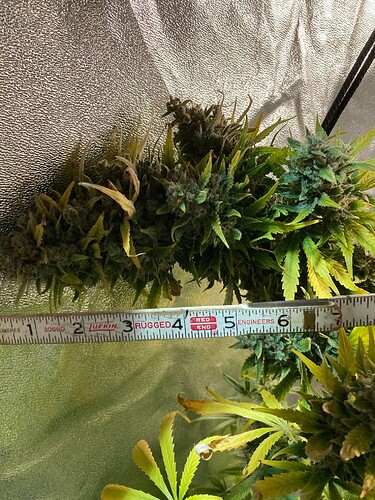 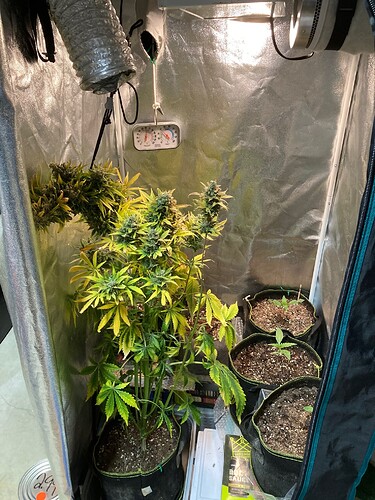 staying the course and keep waiting for some amber

That’s all you can do. Well, I guess you can give up on her, but that’s silly.

clue me in on what’s going on

Different plants will show different traits. Like all my brothers are ugly and I’m a handsome fella.

I think that just happens sometimes but i don’t know why. I just recently harvested a GG4 that was in flowering for 17 weeks!

Just let her do her thing. She’ll be fine👍

Thanks, and I tell my big brother the same thing.

Lights are too far from the top and the plant is hungry. Those 2 things played a role

Is it always 65 in there. If so could be a little warmer 72 to 78. Yes they look hungry but you have been flushing for two weeks so that makes sense.
That top almost looks dry enuff to go straight from tent to curing jar. I exagerate. I don’t do autos but I have read some don’t like to let trykes change. So sound like you have a stubborn girl.
Not a lot of advice but would try keeping it warmer.
Good luck.

Thanks. I upped the temp 7 degrees. The incandescent bulb that I use to raise temp had burnt out. Must have been in the past few days.

I believe i would stake that big ole top from the side of your tent. It could possibly cause some problems down the road (like bud rot) IMHO>

Thanks, that worried me too. Never had such a large top cola before (only grow short autos). I had it supported from the stem in the middle of the big cola. I only detached it to take the photos. She is back hanging in the open air from her “trapeze.”

Thanks, that worried me too. Never had such a large top cola before (only grow short autos). I had it supported from the stem in the middle of the big cola. I only detached it to take the photos. She is back hanging in the open air from her “trapeze.”

I luv the explanation example with brothers

OK, the “fat girl” finally showed significant cloudy and some amber on some of the buds. I harvested those, dried then and they are in jars. Half of the big girl was in the harvest. Now half of the remaining buds are spewing white hairs again. New bud sites have also popped up. The plant is in week 16/17. I have a second crop in the same grow box and they are starting to get big enough that the “old girl” is cramping their style. Fortunately she has been trimmed down considerably in the past month, so light hasn’t been a problem, but soon will be. Do I just cut bait and put her out to pasture to make room for her younger sisters? Any help will be greatly appreciated 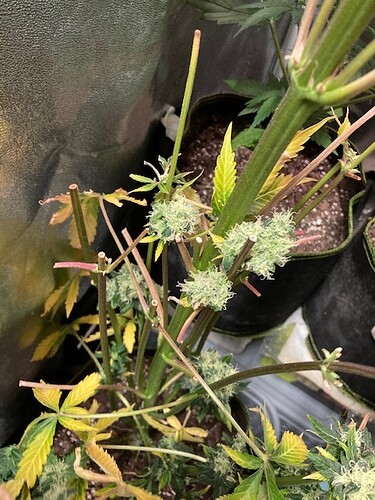 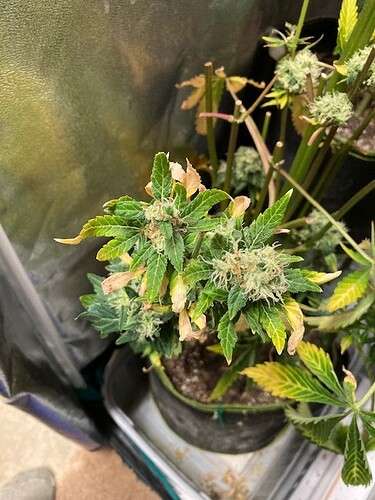 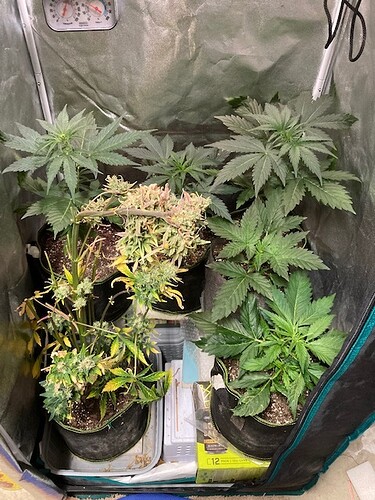