At first, she will only need a misting. Over-watering seedlings is the biggest cause of death. Then when she gets a couple three inches, water very little in circles from the stem area out. This will help root growth. Tap water is fine, but iif you have chlorine in the water, let it sit out. PH around 6.5.
You can cut the top half off a plastic soda bottle and make a dome for her to start too.

@miltos IMO distilled water is an unnecessary expense unless your water there is horrible?

Always let the water sit out 24-48 hours uncovered to allow the chlorine to evaporate. pH to 6.5 if you will be growing in soil

I’m not a light expert but I bet @dbrn32 could give us an opinion.

Thanks for the tag. I could find very little of the info I would typically look for to determine how good a specific light will be for our purpose. Which makes me a little hesitant, usually there’s a reason a manufacturer wouldn’t give you a spectral distribution graph or actual power consumption.

For that reason, I would have a hard time recommending this light. If op has already purchased he can certainly fill us in so we know for next time.

I think will be just alright… Has good reviews and maybe i will ask for the spectrum info, so when i must start show her to the light? And how much close to her? @dbrn32

Not sure, it doesn’t give actual power rating. That light could pull as little as 25 Watts or as much as 200. I’d bet money it’s not 300 watts consumption, and most of the other lights typically advertised that way use more diodes.

It may be a great light for growing herbs and stuff like that. But I’m very skeptical it wi produce much weed. As long as you’re ok with your harvest measuring in grams instead of ounces, go for it. But i have feeling that expecting too much more than that would be unrealistic.

And if u can tell me when i must use it and how close to the plant must be? @dbrn32

I agree with @dbrn32. It’s better to purchase a better light now then be disappointed with your yield. I have purchased lights that state 200 watts just to find out it really puts out 67 watts. Now if I had all that money back that I spent on those lights I could have purchase a half decent mid range light. I have now purchased some better lights with the advice I received on this forum and have almost tripled my yield. Believe me you don’t want to nurture your girls for all those months and not be happy with the yield. You either pay now or pay more late IMO.

I’d bet money it doesn’t pull even half of 300 Watts from the wall. It’s probably more than 25 indeed, but the 50-100 watt power consumption range is probably realistic. If you manage your grow well that means yield potential probably in the 25-75 grams dry range.

That’s all I’m trying to say too. $50 light generally means $50 dollar performance. I’ve never intended to beat up on anyone over their lighting. Just stated what should be expected from them.

It could be a little better than I’m guessing absolutely. But there’s not enough info to determine that in my opinion.

Killawatt, or if you’re good with a multimeter. Otherwise you can see if the cover isn’t sealed for warranty type stuff. Generally the driver labels will tell you just about everything you need to know.

Ok so it will write down how much W will produce? @dbrn32 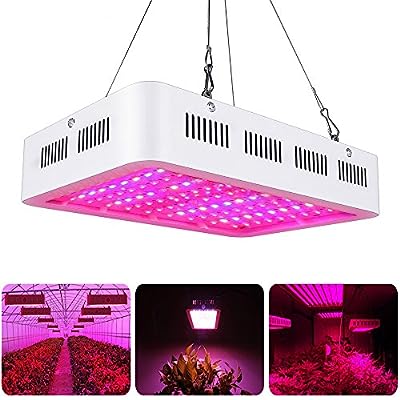 So what other cheap DIY light solutions i can add here in order to take good results? @HJL

If you look at the link I sent you in the 1000 w light’s description it states 230 watt consumption. That’s the true watts.