I’m still new to the CBD oil world! So I’m sorry if these are dumb questions.

My Dad has been diagnosed with End Stage Liver Disease- via alcoholism and also has prostate cancer. He doesn’t eat and sleeps most of the day, I can tell he is depressed.

I’ve been reading a lot edibles but as his liver is no longer really functioning, I’m unsure if this is the route to go down.

Then when I read HOT TINCTURES extract via alcohol. Just trying to avoid alcohol etc or if it’s cooked out 2:1 (THC/CBD) the alcohol no longer is in the tincture?

Just trying to understand if caps would be better than tinctures?

Any advice would be great- I just want him to have a bit more energy, appetite and be comfortable. 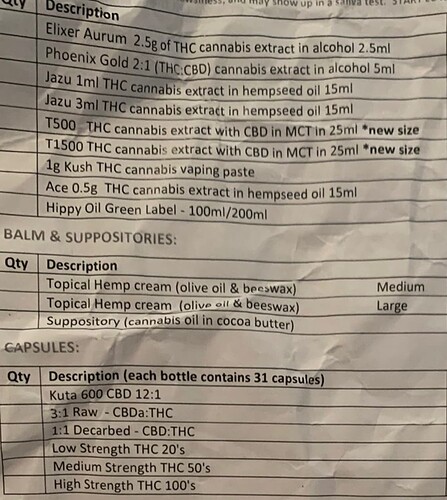 Sorry to hear about your situation.
Might be just as easy to extract with something like coconut oil.
Then you can make edibles from that.
Honestly I don’t get an appetite (the munchies) from edibles. And the liver plays a part in activating THC.
Sublingual delivery might be helpful but I have never felt any effect from sublingual use.
Smoking does give me the munchies and in a couple hours its gone. Its easy to over do edibles and last time I did I was stoned and miserable for 2 days. Smoking or even vaping which is cleaner might be a better way to start but this is just my thoughts. Someone else may have more firsthand experience.
I mostly wanted to kick off this thread.

No tincture. Recovering alchoholic here. Caps…gummies…olive/butter/coconit oils. Consult physician but Consider life expectancy vs pain and suffering in my opinion. Liver disease retired me. Recovered. Caught just in time. I hope your Father is holding on ok. What do you need. I will be available for anything your Fathers needs including seeds to grow and equipment. We are not Doctors but this is a very natural remedy. Infusions are safest form I think. Has helped me a lot. Alchoholism is hard. My family and i suffered it. I will not abandon a fellow sufferer. Let me know what I can do.

Welcome to the family.

This hits home. I have oils available to give to you free 100%. I will even cover mail costs. Just let me know if not available to you.

This is the reason we like ILGM. It is people like @Storm and many others that help this forum so much. Welcome to the neighborhood

. I am sorry for your dads health issues. I hope you can get with @Storm to help him thru this. God bless.

Sorry to hear about your dad. Many here are growing to help,family and friends. I make canna-caps, tincture, canna-butter (brownies). I’m using high CBD weed (12-18%). The canna-caps help with pain and inflammation. Tincture does as well. I do get the munchies from all the above but more so from smoking or vaping.

Hey Im saddened to here about your fathers condition, but a ticture would be a bad idea for an alchoholic. That said, end game is end game right?
I deal with cancer patients and people with sleep/ eating disorders and rheumatoid arthritis often. Contrary to popular belief, Cannabis is not great for major pain, its a mild analgesic at best. If your father is experiencing major discomfort… the pain threshold scale is from 1 to 10 with 1 being uncomfortable, 2 being sore, 3 is pain that can be handled with mild analgesic or over the counter medicines and often cannabis, 4 is beginning to require more serious intervention, 5 is barely manageable and cant function without meds on board, 6 is hospitalization, 7 is real bad broken leg or ruptured spleen kinda thing, 8 is 2nd degree burns and worse, 9 is major burns and some nerve disorders, 10 is passing out. The reason I share this is that a doctor or person with knowledge of medicine will assess the persons oain level before given an appropriate level of medication to deal with it. Cannabis has veen used up to around a level 3 pain threshold with moderate success depending on the nature of the illness, in otherwords, it wont work at all for some things. Case in point, topically, rheumatoid arthritis is very treatable with cannabis whereas osteoarthritis is not.
Cancer patients generally benefit from an appetite boost from light to moderate inhaled doses of certain strains of cannabis. You will need to experiment a bit here to see which strain hits the hungry receptor for him.
The next consideration is rest, many Afghan strains, particularly black hashish made from Balkhi or Tashkurghan can put an elephant to sleep at the right dose. Keep in mind that cannabis users often require larger and larger doses with more frequent use, and or changing up the strain periodically.
The last concern is that high thc strains can induce anxiety or paranoia… also people may have panic attacks with strong cannabis, so its wise to have cbd drops on hand for a bad trip.
I hope this has been moderately helpful, and I wish your father all the best and a seemless transition.

2 thoughts- his pbysician likely gave him a special diet to flollow. You may have to modify some edibles to comply.
And 2 -I wonder if smoking it would be a better delivery system, It might be less toxic to your dad overall.

My Doc and buddies suggested not smoking it. I fully agree with consulting Dr. first. Most are not radicals against it.

First, I’m so sorry your Dad, you and your family are dealing with this. Feel free to look up the only post I started on this site (as I posted a longer version of my story). But, short story, I was born with Hemophilia in 1974. Science was not my friend back in the early eighties, as I was infected with HIV and Hep C as a kid (also Hep B, but my body cleared it). Through the grace of God, I survived as thousands of Hemophiliacs died from HIV. I made it until 2002 before I had to take medications for the HIV. By that time, the medications were pretty safe (i.e., few side effects).

However, I still had Hep C hanging over my head. I ignored it the best I could, as I had no issues. So, after the HIV meds, I drank anytime I wanted. I got blackout drunk a number of times, just because I was carrying the pain of seeing my peers drop like flies in the 1980’s. I just wanted to throw caution to the wind - I was sick and tired of following doctor’s orders (as they were the ones that, indirectly, infected me with these viruses in the first place).

I’m not sure if my consumption of alcohol sped up my liver issues (I’m sure it did), but Hep C is working 24/7 on destroying your liver, drinking was only hurting it until it cleared my system.

Unfortunately, like your Dad, when the alcoholism is to the point where you need to be constantly medicated (like all day), it acts just like Hep C.

I had gone through a nasty Hep C treatment back in 2010ish. It was 6 months, and it sucked. It didn’t clear it. Thankfully science started understanding that different genotypes responded differently. The genotype 1 responded great to the nasty treatment. Unfortunately, I was genotype 3A - it hardly responded to that treatment.

In 2016, when I coughed or sneezed, or when I was breathing heavy (moving heavy stuff), I could start to smell the ammonia being exhaled from my lungs. That was a sign my liver was failing.

I really, honestly, thought I was finally done. I had dodged too many bullets, my “save a life” tokens were empty. My liver scan said I was stage 3-4 liver cirrhosis.

In 2017, science finally found a really, really good drug that cured most genotypes, it was called Epclusa. It took me six months on it to rid my body of Hep C (a normal course is 3 months). It was a once-a-day pill (if I recall), and I had no side effects.

I recall a few weeks after taking it…maybe a month, my ammonia smells completely went away. Test after test showed the viral load dropping. My liver tests were suddenly normal.

However, I’m only telling you this story because I hope it will help you. I’m not sure if your Dad is still with us, but alcoholism is often a disease that results from past trauma, depression or anxiety. It’s an easy drug to get a hold of, it’s socially acceptable, and it flies under the radar of doctors (until it goes too far).

And truth be told (I’ve experienced this myself), once a person moves from childhood to adulthood, the medical community stops caring. Personally, it’s heartbreaking to me, as I was once treated with the utmost kindness and complete care as a boy…even up to a teenager (there were some that were sympathetic to my conditions). Now, as a 48 year old guy with the exact same fears and uncertainty and with exactly the same conditions - I’m often dismissed.

I’m sorry I went long, and I promise I’m not making this post about me - I just wanted to let you know your post really, really hit home with me.

I bookmarked this. I don’t bookmark anything. Ever.

I don’t know what you’re talking about specifically…

Will you pm me?

Hey Tommysalami - there is no PM function on this site. We’re all anonymous here, feel free to ask/post anything you’d like.
In what way don’t you know what I’m talking about? I’ll answer any question you have!