My goal for this experminent was to lengthen the probe on the Ac Infinity cloudline fans. I have a T8 and A T6. Both are short about 4 foot of what I need. I also wanted to split the signal so that I only had to have one probe sending data split to two control units. Those of you that run two T model fans may find that one will read 73RH while the other reads 72RH for example even though they are right next to each other. I wanted to eliminate this.

I read reviews where people were not successful in lengthening the probe cable. I found that the probe cable used a 4 pole/conductor TRRS type meaning it has 3 bands/ insulators on jack. I found this cable
https://www.amazon.com/gp/product/B00S1R7F2U/ref=ppx_yo_dt_b_asin_title_o00_s00?tag=ilovegrowingm-20 and it has the proper pinouts and works to extend the probe fine.

I tried using this https://www.amazon.com/gp/product/B01I37CIEW/ref=ppx_yo_dt_b_asin_title_o05_s01?ie=UTF8&psc=1 Y spliter to split the signal. It did not work. Only one jack can be plugged in at a time or both control modules lose signal.
I also tried this https://www.amazon.com/gp/product/B07D7W16Z1/ref=ppx_yo_dt_b_asin_title_o02_s00?ie=UTF8&psc=1 splitter hoping it might work. It does not. Same as the first. One line plugged in data goes to the control module. two lines plugged in neither module receives a readable signal…

So thats where I am at on this deal right now. It would be nice to only have one temp/Rh reading to deal with but not sure what the workaround is as of yet.

If anyone knows it’s probably @dbrn32

I wondering if splitting is causing line voltage to drop and the sensor is just that sensitive.

@dbrn32 is the master so his input. Anything electrical I would trust him with. No ifs, ands or buts.

I’m not exactly sure what they are using, but sounds like that’s your issue. It’s going to use a resistance base to then change to analog signal. I don’t see any way to make that work off the top of my head.

Well it was either you knew or didn’t.

thanks for the input. much appreciated.

Wonder if there’s some sort of signal boosting splitter. One that doubles the signal and splits it to two outputs.

Or I wonder if something like this would work. You wouldn’t be able to use A and B output at the same time but maybe the volume knob would act as a gain and boost the signal and then you could add the splitter. 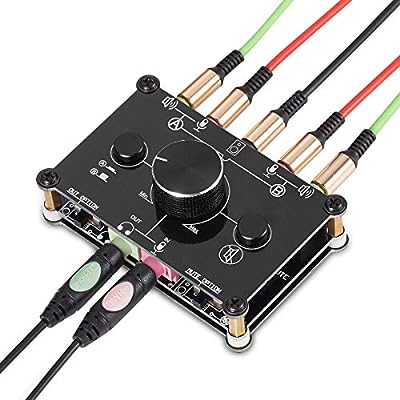 I think a signal multiplier would do it. Would need to make sure you get something compatible with temp sensors. Ac infinity may share that information.