Ready or not, my deadline is arriving quickly. Monday morning, the lights go off for the last time for 72 hours. A couple of plants could have used more time, but almost 14 weeks for an indica is pretty crazy. If there are not some benefits from it, then it might prove that a shorter day could be more beneficial. Like i said, on one of my grape apes it made very large buds, with the other one the buds are not as large, but they are impossible to touch because they are so pungent and sticky, that its like tree sap covering it. That one doesnt photograph well because its so leafy, that the buds are kind of hidden. I should be able to get these tested, and can see if they exceeded their strain specifications. Plus i have people that are like weed sommeliers, and review strains with the best of them. At any rate, they have just over a week left. Its kind of liberating knowing its almost done though. Not gonna lie.

You know, i read that so long ago that i dont really remember where i actually read it.

No worries. It’s not a big deal one way or the other and with everything being field crops back then much of the outcome was dependent on the weather for that season.

Somewhere there is a British survey (I can’t find the link just now) of confiscated marijuana from the 70s. Averages were about 5% like you say but they also found specimens that tested above 15% from both the Hindu Kush and SE Asia; so at least sometimes either region would be capable of catching fire.

Those could have been outliers from the perfect season, rare batches of elite sinsemilla, the result of poor testing (still happens today) or a sign that by the time it got to the UK it had been picked over. But THC% is based on the weight of a dry sample and nearly everything back then had lots of seeds and more stem and leaf matter than you’d find today (and fertilized buds are just less potent). All those non-THC containing parts account for a considerable percentage of the dry weight.

If you look at the samples testing ~30% you’ll see that they have been trimmed down to nearly pure bract clusters because the bracts contain the highest concentration of THC by weight. You can use the same trick with your samples if you want to get the highest numbers.

If you took some of those old genetics and grew them seedless, with all the care and greenhouse love the plants get today I think that you’d find more than a few over 15% and probably some over 20%. With a few generations of breeding directed at increasing THC I bet you’d find yourself in the contemporary THC range pretty soon with more than one variety.

Like i said, im just excited that someone else will try this.

I’m kind of excited to get setup for side-by-sides; it’s something I’d thought about before never followed through with. I’m sure other fun experiments will come up more often once it’s installed (a UV one pops immediately to mind). I just wish someone made a 2x2x8. Anyway thanks for the kick in the pants to finally get on with it.

The other member of the household is a PhD so I know a little bit about the power of peer review.

Three outta four of my new grape apes died. Well I killed them, they didnt grow for a month… I either killed them with too much light or topped them too early. I just thought to tell ya because earlier you said the variation… I had three deformed, one stretched, one runt. No big deal life grows on

Here is the link I couldn’t find earlier.

The tetrahydrocannabinol (THC) content of 304 seizures of illicit Cannabis products was determined using gas chromatography. This procedure results in the conversion of THC acid to THC itself and thus gives the total THC content of the material,...

Shit man. That sucks. Thats why im almost glad i have this deadline. I have just one week to keep them alive. They may not be at their finest, but a lot of my worry is gone. Grape ape is an interesting strain though. You say life goes on, but i will mourn for your loss.

Yeah all of that stuff was part of government propaganda to make weed seem so much worse than it is. Of course we know all the lies that were told in demonization of this almost devine plant. A PhD huh? Wow, playing with the big boys now! The scientific method is in full swing now. I think the stretch has become my biggest infatuation with this. I could almost conceive of the idea of starting a flower with 16/12 for 3 weeks, and then moving to 12/12 afterwards to limit stretch, if that is truly what happened. My head is swimming with ideas about this, and im sure yours will be too, if you find differences from normal grows. However, if you find no differences, then oh well i guess. At least you will have quenched some intellectual curiosity.

I had deformities with my first run of the grape ape. I had some sort of polyploid. Weirdest thing ever. It has a thick flat stem, and about a thousand leaves stacked into about an inch of space. I kept it just to see what it would eventually do. Maybe grape ape is just prone to mutations.

I think that sometimes a lot of secrets to biological functions can only be unlocked through extra-ordinary conditions. Just the idea that this flowering stage is so expanded really makes me wonder if it slowed the function of the trichomes. Indicas evolved to be in such a hurry to get done what it needs to get done very quickly due to a quick transition to wintery conditions. Did the trichomes continue their quick pace, or did they slow down? Another thing i noticed is that the lower buds seem to be finishing at the same time as the tops. I mean, what if the trichomes just kept producing their essential oils at the same pace as they normally do? I keep having this almost fantasy about getting test results back, and finding out that i have the most potent buds ever recorded. Probably a pipe dream, but what if? Then i also think the opposite could be true, and i could find out that the extra time degraded everything. This is sort of a stream on consciousness post, but i think if you do attempt this, it could give you a headstart. All i know right now is by comparison to the first grow, the buds are way bigger, way more dense, and went through an evolution in their smell. Im going to beg my wife to let me try this again.

Do you ever feel like if you try to keep these things alive any longer, they are all going to die on you? This tent is unruly. Buds are falling on their own weight. Leaves are yellowing. I wonder if i have to chop now. If i chop now, they HAVE to take 3 weeks to dry. Any advise would be appreciated.

You’re still chopping on Monday? I’d live dangerously; give everyone a big drink of water, tie up any super floppy stuff and let it ride. Of course you’re there and know the plants best so go with what feels right. Right or wrong you’d be hard pressed to ruin it at this stage.

On monday i was turning the lights off for 72 hours. Which i have never done that long before, but its a way to prolong it. I was going a little longer between waterings trying to stress them a little to finish. I think ill water them each day until sunday.

This could just be my severe anxiety. I get freaked out about things real easy, and start having panic attacks.

I’ve been struggling with the same for the past 7-8 years. I wish had more than sympathy to offer. At least with plants I’ve always had a “I can always plant another one” attitude but I understand how little help logic is in the grip of an attack. For what it’s worth I think short of setting them on fire there is no way you’re going ruin anything over a weekend.

Yeah its just constant stress managed to rewire my brain to overreact to stress. Now its just like a constant feeling of guilt. It sucks. Anyway, this is their penultimate day of life they will see. Lets hope everything goes well. I will not have anything to report after monday, but im going to post some pictures at the beginning of their last night.

I didnt do the math right, so the girls have a one day reprieve on 3 days dark, then the big cut. So ill have before dark pics, so i can have some after dark pics to see if there is any noticable change.

Interesting development that i had to investigate. Ive been noticing for a bit that the buds are not really sticky. They are kind of sandy with an oily texture. Upon investigation, i believe that the “oily” part is the terpenes and the sandy part is the thc having crystallized. If this is the case, this could be a very interesting development. Hash making plants tend to be sandy due to the crystalline formation of thc-a. Under heat, they get very potent. Did the prolonging of the flowering period force the trichomes to produce actual crystals? These are not hash plants, but did i force them to be? Has anyone had experience with sandy feeling buds? It seems its very common with the “cookies” strains.

I always had a hunch they crystalize after enough exposure, light, temp, air. Maybe prolonged flower brought more secretion of cannabanoids added to the aged stuff. Affecting the texture? Worth considering too. Now I’ve had what you might call sandy buds I think, but not sure, from letting the soil having a long dry peroid before harvest. Like final water then harvest 14 days later or so…
The more buds I turn out the more variance I see in textures and shapes anyway, and I haven’t jounal’d anything or kept notes. Good fun, hopefully never ends and the variety keeps coming 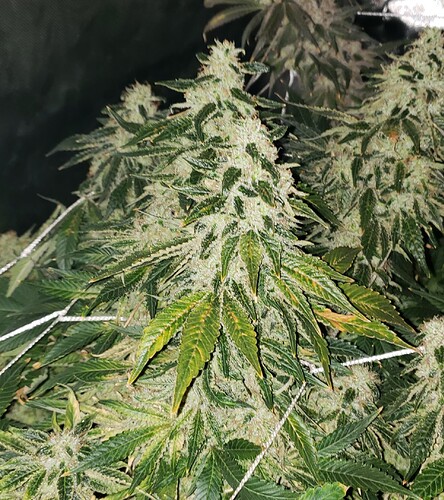 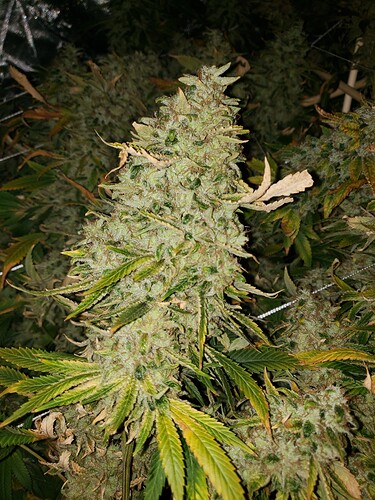 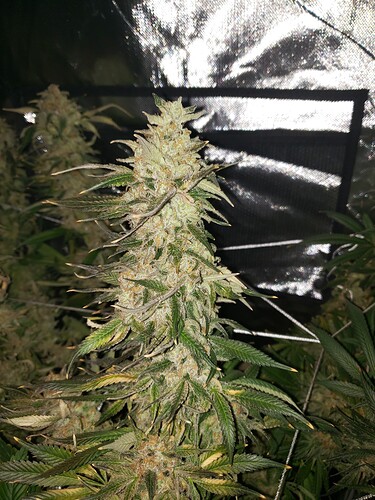 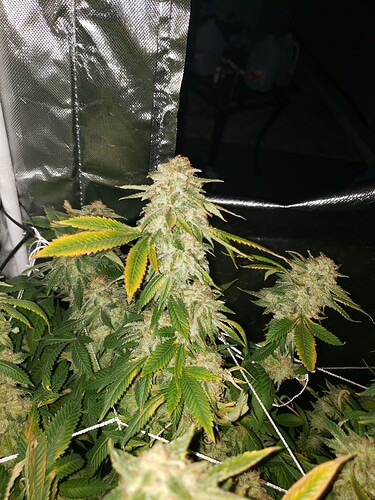 These pics are just before the 3 days of dark. Im going to take pictures of these same buds when they emerge. I want to see the difference. Im curious if there is anything to this 3 days of dark thing.

Man way to go. Fat buds for sure