the mountain is tall and the valley is deep, nice job. lotta work to do without smoking it.

Probably explains the lack of motivation. Hey look at that. A case where NOT smoking weed makes you lazy.

What was your final weight?

I got 2 1/4 pounds of top buds. Still weighing the second tier buds, but i pushed my scale too hard. I thought it had a 200 gram limit, but it was only 100. Now it wont tare correctly. Its about a pound though. I cant be off by too much. So im just going to say 3 1/4 pounds. Im getting it tested so i could release all the info at once with comparison’s to the breeder’s stats. But its over 2 grams per watt.

Even though it isnt really done curing, 4 jars are already gone. Its been hard to keep track of the weight. People love the Bay-11. It isnt the best smelling of the 3, but it must have a really nice high.

I forgot that i did put the trim leaves over a screen and got 12 grams of kief from it too. I dont know if that is a lot, but its pretty cool to me. Im wanting to do a bubble bucket on the second tier buds and see how much more kief i can get. It would be pretty cool to have an ounce of kief. I sure wish Biden would take it off schedule 1, so i could just taste test it just once. I used to love getting baked and watch a good movie.

Huge haul man! I can imagine the space over three pounds would take, to dry and cure and store. What an effort

Food grade buckets with gamma lids. Lab crushed it, and could probably use some

It’s the trimming that kills you

That just made me laugh out loud

YES! The trimming SUCKED! I had nobody helping me. The first jar i filled had already cured for 2 weeks when i was finishing with the last jars. Think I’ll do one plant if i get to do it again. 4 ounces would be just fine.

Sooo, youve grown some Bay 11’s eh??? I have some Bay 11 seeds I got from growers choice… So, how’d they turn out??? You are the only person I’ve seen mention this strain to date… I have yet to put mine in the dirt… I kind of went crazy buying seeds for a while and now have enough to last for YEARS!!! How was the yield??? The quality of the smoke??? Do you have any pics??? Ooooh do tell, do tell!!!

Actually, I think you can get away without doing 12 hours of dark… I had a couple of big buds going in the same tent… I had read about gradually moving your plant to a 12/12 schedule. So I thought I’d try to simulate a more progressive time change… Starting with going to 14/10 from 16/8… Within a week, one went to flower, the other did not… I then went to 13/11 and both were in flower… I speculate the 2nd plant would have done it even if I hadn’t shortened the time that extra hour… I did put them on 12/12 the following week and towards the end of flower brought them down to 10/14 in hopes it would convince them to hurry up… This was one of my 1st grows… Not much scientific about my little experiment, but I can say definitively that even a small reduction in daylight can result in the plant going into flower

The Bay 11 is a decent yielder. The problem is that it doesnt grow fat colas, but they are longer colas. That means more trimming. I dont know how much of the thread you read through, but i dont smoke it. I just love growing it. I had 3 strains going. Of the 3, the Bay-11 seems by far the favorite. It smells the least appealling to me, but the high must be pretty nice. It was a cannabis cup winner back in the day. I think you will not be disappointed. 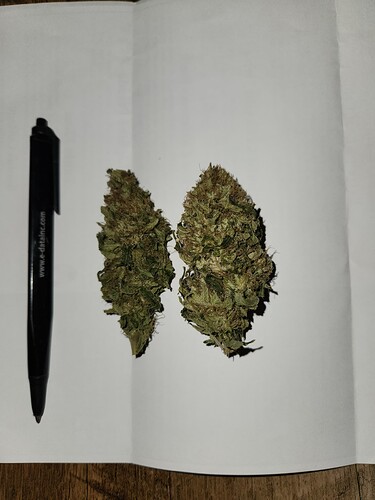 Your top colas will average about this size, unless you want to see stem. Not the biggest, but there are a lot of them.

Any experimentation on the plant is worth trying, even if it teaches you what not to do. The point of my experiment was to see how much it would affect yield/potency or flower time to increase the daylight hours. So i changed the length of a day to 28 hours, so as to be able to give 16 hours of daylight for each “day”. Given my setup, i really believe i may have doubled my yield. But given that even the indica had to flower for 14 weeks to mature, its hard to say if it would be advantageous in a perpetual grow. I think its great for the one-at-a-time grower. Now im waiting for potency test results. If i manage to exceed the breeder’s estimates, then it might be advantageous, even for the perpetual growers. My hope was to inspire other growers to try the same experiment to see if the results were replicable with mine. Or for someone to do the opposite and do a shortened day, like an 8/12 to see if it shortened the flowering time. Im still waiting to post stats. I will keep you posted as soon as they are available. But keep experimenting. Hell! We might be helping NASA to get people to Mars.

Actually im pretty sure i got mine through growers choice. I think 80 oz is outdoors. And thats probably per plant. Inside i think it says up to 500 grams per square meter. Which i got about 700 counting the lower tiered buds that may go into a bubble bucket. I want to see that big pile of dust. It sucks i cant try it! Water water everywhere, but none for which to drink!

Actually, after that 1 plant flowering on a 14/10 schedule… It might be worth trying that again… Possibly shortening to a 12/12 near harvest

Yeah, i cant even imagine what 30 oz in one square meter would look like. That would have to require lights on the top and bottom. Thats about 93 grams per square foot. So you would have to have a massive 10 gram bud EVERY 4 inches.