So, I’ve been sitting on a grow set up for over a year. Seeds and all. I purchased everything in Amazon. Tent, vent, and CMH light.

I didn’t start anything because of a hesitant wife.

Out of the blue she told me she started 3 seeds. A white widow, a chronic widow and a black widow.

She started them in cardboard pots on the window sill. All three popped up. I was out of town, due back in a couple days. She didn’t mark the pots.

She sent me a picture and they were through the soil and reaching for the sky.

I got home and the next day set up the tent vent and light.

This is where things got bad.

The ventilation in the walk in closet was poor. It heated to 90-95 degrees, dried out the soil quickly and wilted them all. Some tap water got them to bounce back. RH in the 30’s, i placed baggies over them.

I tried to increase the ventilation. It didn’t work. I wilted the plants three more consecutive days. I gave up on two of the plants.

I also gave up on the CMH and ordered an LED. A 900w triple chip GreenGo off Amazon.

At this time I also dropped a Black Widow seed into a cup of FFOF.

She popped up nicely.

The LED made the environment MUCH easier to control. Temps in the 70’s

The Black Widow quickly surpassed the unknown widow and here we are.

I’m attaching pictures the first pic is of the 3 unknown widows on March 31.

The next pictures are of the Black Widow on April
21.

She was transplanted the next day into 3 gallon pots of FFOF along with the unknown Widow.

The next pictures are 5 days later. The morning of the 26th. 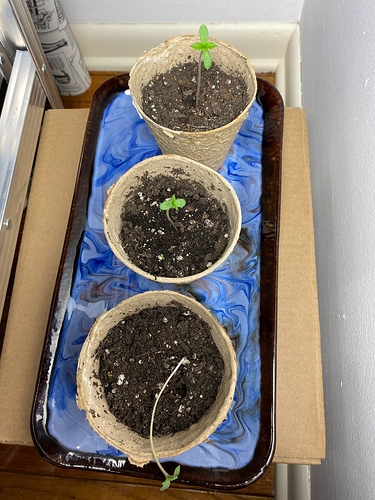 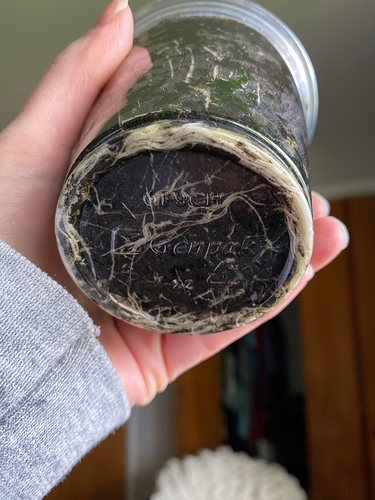 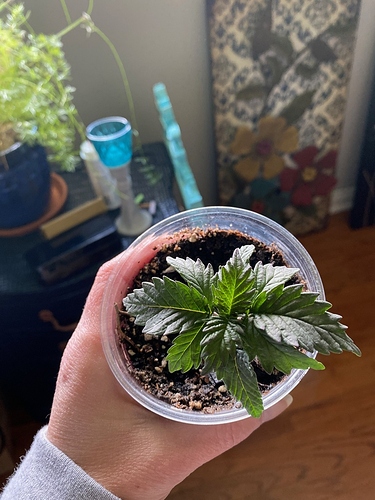 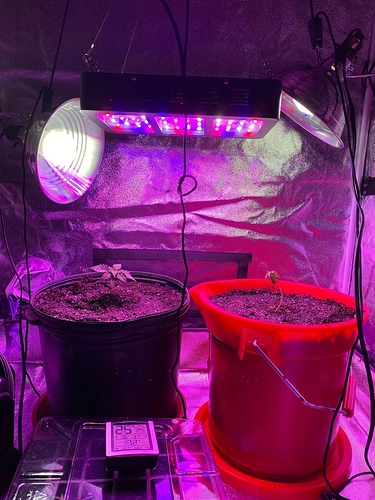 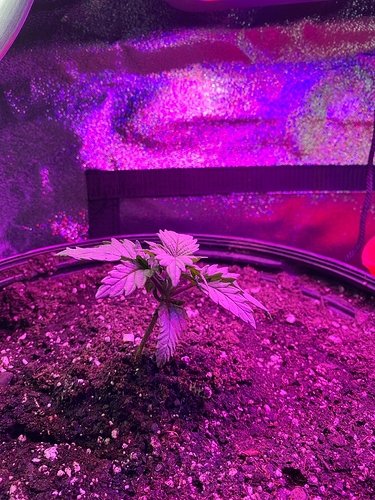 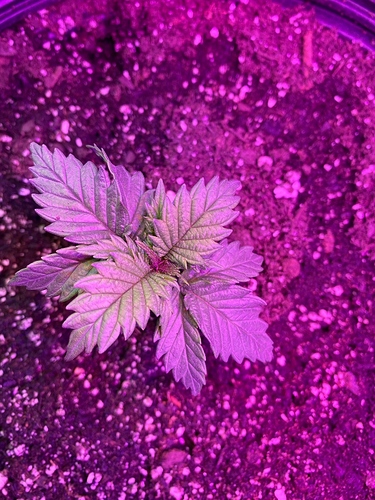 Transplanted the next day. 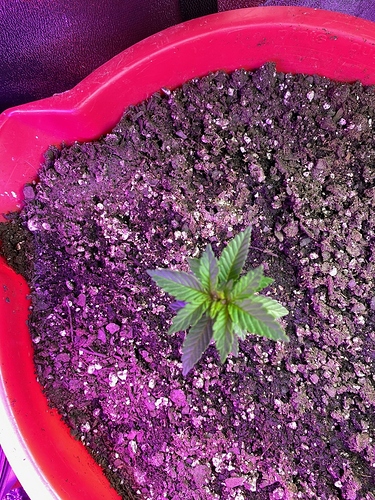 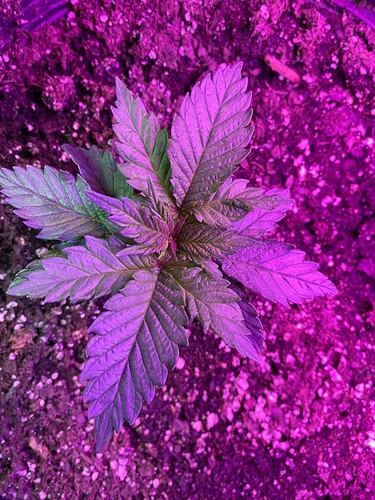 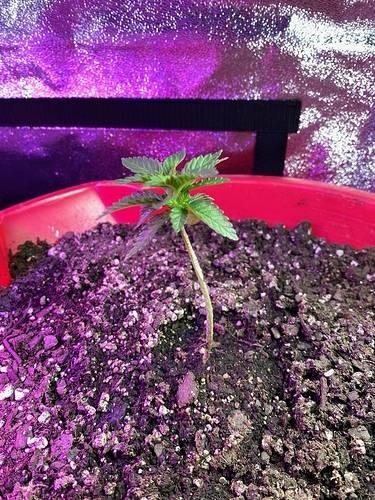 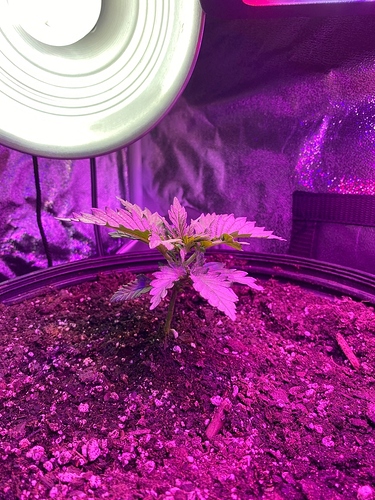 Moving forward my plan is this;

The unknown widow is along for the ride. My focus will be on the Black Widow.

I have the plants in FFOF. I’ll start to add Nutrients when we switch to flower. Currently on 18/6.

The guy at the hydro shop showed me that 3ml of PH down takes our municipal water to 5.8 every time. So even though I don’t have a PH meter, I’m confident my girls are getting 5.8 water.

As for lighting, I have options. I can run what I have in there now and when I switch to Flower, add three of these. https://www.amazon.com/dp/B01H2Y5U4M?ref=ppx_pop_mob_ap_share

I have many questions.

Will I have enough light for flowering 2 plants?

When can I top the Black Widow?

As for the water PH, I see Hydro calls for 5.8 whereas soil is calling for 6.5. Why the difference? Am I killing mine with 5.8 in FFOF?

Thoughts on adding a Sour Diesel Auto to the tent to go along for the ride? If so, what lighting should I add?

Also, i feel my Black Widow is small for her age. Is this because she was root bound in the plastic cup? Or is she right on track for a photo? I see autos twice the size of her at her age.

if u are in soil why would you want ph at 5?

That’s the question I asked.

I have been using 5.8ph’ed tap water before I learned that that was too low.

So why? Why does Hydro call for 5.8 whereas soil calls for 6.something.

@BetrayedSoul is a hydro grower lets find him

type in @ and a name and they will help you. @Myfriendis410. that was wrong that that person told you 5.8 for fox farm. maybe promix organic?

Nutrients are available at a lower ph in water as opposed to soil. I dont have a clue why but it works that way.

Here’s a chart to show what nutrients are available at different pH levels.

I’m not real familiar with ocean forest. Happy frog is peat moss and compost based when people use promix I see they run pH lower around 6. Maybe that’s why? I’m not real sure @pptrsha1

Thanks everyone. Time to break down and get a PH meter.

Thanks for thanking the time to read my journal. I’ll be updating frequently. Any input is appreciated.

All good points but need to point out that you really need to have a digital PH meter along with a TDS meter. Municipal water supplies will also vary, sometimes a lot, depending on source of supply.

Those lights you referenced are not worth buying IMO and should not invest in anything until you get smart on lights. Your 315 CMH light: did it have a ‘cool hood’? The current LED: what exactly is it?

5.8 PH is not really a bad all-around number: I have found I tend to PH everything to 6.0…+ for soil and - for hydro or coco. That is right on for Promix.

I run Happy Frog (pretty much the same as Ocean Forest once the original nutes are eaten up) and I shoot for 6.3 to 6.8 during veg and 6.5 to 6.8 during flowering. It’s all about what nutrients you want available to your girls at what stage. Like others, I don’t understand the science behind it. Knowing that it works is good enough for me.

get a tds meter too VERY IMPORTANT

My current light is a 900w triple chip GreenGo

I’m running this along with two 100w CFLs for Veg.

As for those flower LED lightS, I already have them. Might as well use them if they’ll work.